Banning is a city in Riverside County, California, United States. The population was 29,603 at the 2010 census. It is situated in the San Gorgonio Pass, also known as Banning Pass. It is named for Phineas Banning, stagecoach line owner and the "Father of the Port of Los Angeles."

Banning shares geographic and regional features with its western neighbor, the city of Beaumont. Banning and Beaumont have been rapidly growing in size and population since the 1990s. Both cities are about 80 miles east of downtown Los Angeles and 30 miles west of Palm Springs, each connected by freeway and railroad.

The area, up to the mid-19th century, was inhabited by the Cahuilla people, though the region around Banning was originally Maringayam (Serrano), and the Cahuilla expanded into the pass only in historic times. In 1824 it became part of the Mission San Gabriel Arcangel, and then the Rancho San Gorgonio. The first Anglo to settle in the area was Dr. Isaac Smith in 1853. In 1863 a smallpox epidemic further diminished the Cahuilla. The government created Indian reservations for the Cahuilla in 1877.

The development of the settlement that was to become Banning coincided with the start of the Colorado River Gold Rush. The Bradshaw Trail was a wagon road to the gold boomtowns of Arizona Territory that passed through the area in 1862. Gilman's Ranch north of downtown served as a station for the stagecoach lines on this road. The railroad followed passing through the town in 1876. The Southern Pacific (later purchased by Union Pacific) railroad, was a major contributor to the area's growth. U.S. Route 99 was built in 1923, followed by U.S. Route 60/70 in 1936, and subsequently Interstate 10.

Banning borders the Morongo Indian Reservation, home to the Morongo Band of Cahuilla (Mission) Indians. Relations with reservation residents have been stressed by such actions as disputes over water rights. See Dorothy Ramon's book (published 2000) "Always Believe" for a Maringayam's views on Banning and reservation life.

Prior to the name Banning, the settlement was called Moore City. Ransom B. Moore operated a large cattle ranch and was a member of the Los Angeles County Board of Supervisors, settling in the area and nearby San Gorgonio mountains in the early 1860s. Moore sold his holdings and relocated to central Arizona in 1883, establishing a large cattle ranch on the site of the former Camp Reno army outpost and later served in the Arizona Territorial Legislature.

The town of Banning was incorporated on February 6, 1913. Between the years 1880 and 1980, it was the largest city in year-round population between Redlands and the Colorado River.

The St. Boniface Indian Industrial School was opened in 1890, providing vocational education to Cahuilla, Serrano, Luiseño, Kumeyaay, and other American Indians. Bishop Francisco Mora y Borrell authorized the school and Mother Katharine Drexel provided funding to the Bureau of Catholic Indian Missions for purchase of the land, construction, and operations. Over its history, about 8,000 students attended the school which was demolished in 1974. A small abandoned cemetery remains.

During World War II, Banning was the site of the 1,000-bed Banning General Hospital. It supported training at the Desert Training Center and was later used as a naval convalescent hospital. The facilities were dismantled in 1948. 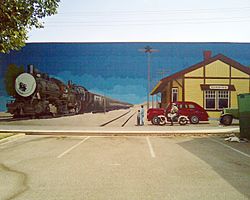 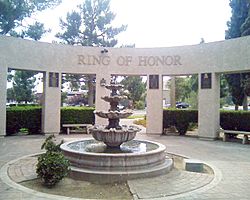 City of Banning Ring of Honor

In 1942 the citizens of Banning raised funds for the purchase of an M3 Stuart tank to support the war effort. After the war the tank was given to the South African defense force; in turn, the tank was donated to a Memorable Order of Tin Hats Shellhole in Richmond, Natal Province, South Africa. The tank, named "City of Johannesburg", is now preserved at a local museum at Richmond.

According to the United States Census Bureau, the city has a total area of 23.1 square miles (60 km2), all of it land.

Banning's elevation is approximately 2,300 feet (700 m) above sea level, which gives it a cooler climate in contrast to the county seat Riverside at 800 feet (240 m) above sea level and the Coachella Valley of the Colorado Desert to the east.

Banning is traversed by the San Andreas Fault which is responsible for the creation of the pass in which the city is situated.

According to the Köppen Climate Classification system, Banning has a warm-summer Mediterranean climate, abbreviated "Csa" on climate maps.

According to the 2010 United States Census, Banning had a median household income of $38,919, with 19.4% of the population living below the federal poverty line.

All content from Kiddle encyclopedia articles (including the article images and facts) can be freely used under Attribution-ShareAlike license, unless stated otherwise. Cite this article:
Banning, California Facts for Kids. Kiddle Encyclopedia.