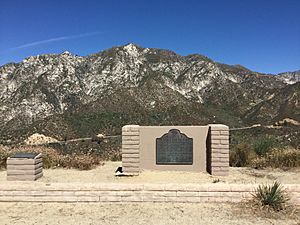 The San Gabriel Mountains National Monument, established in 2014 and managed by the U.S. Forest Service, is largely within the Angeles National Forest.

The campgrounds at Broken Blade, Twisted Arrow and Pima Loops were closed on July 26, 2013 after squirrel infected with bubonic plague was discovered. 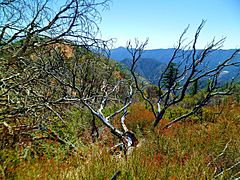 On 1 November 1966, a fire started at 5:19 a.m. on the Los Pinetos Nike Site (LA-94). The fire spread, threatening medical facilities and residential areas south edge of the national forest. 12 firefighters with United States Forest Service's El Cariso "Hot Shot" crew were killed they were caught in a flare up in a canyon. 11 more firefighters were seriously burned in the incident. The fire was brought under control on at 1:00 p.m. on 2 November, having burned 2,028 acres (8.21 km2).

In the Station Fire, more than 161,000 acres (650 km2) of the forest were burned by an arson fire that began on August 26, 2009, near Angeles Crest Highway in La Cañada and quickly spread, fueled by dry brush that had not burned for over 150 years. The fire burned for more than a month and was the worst in Los Angeles County history, charring 250 square miles (650 km2), approximately one-fourth of the forest; displacing wildlife, and destroying 91 homes, cabins and outbuildings and the family-owned Hidden Springs Cafe.

During the fire, two firefighters died after driving off the Mt. Gleason County Road looking for an alternate route to get the inmates out at Camp 16. The Station Fire threatened the Mount Wilson Observatory atop Mt. Wilson . The site includes two telescopes, two solar towers, and transmitters for 22 television stations, several FM radio stations, and police and fire department emergency channels. Although the fire scorched one side of the outhouse at amateur-owned Stony Ridge Observatory, six miles northeast of Mt. Wilson, aside from minor damage from smoke and ash infiltration, the remainder of the observatory and its historic 30-inch Carroll telescope survived.

In September and October 2020, the Bobcat Fire burned 115,796 acres (180.931 sq mi) (468 km2) in the central San Gabriel Mountains of the Angeles National Forest. It was one of the largest wildfires in Los Angeles County history.

The Angeles National Forest manages the habitats, flora and fauna ecosystems, and watersheds. Some of the rivers with watersheds within its boundaries provide valuable non-groundwater recharge water for Southern California. The existing protected and restored native vegetation absorb and slow surface runoff of rainwater to minimize severe floods and landslides in adjacent communities. The land within the forest is diverse, both in appearance and terrain. Elevations range from 1,200 to 10,064 ft (366 to 3,068 m). The Pacific Crest Trail crosses the forest. 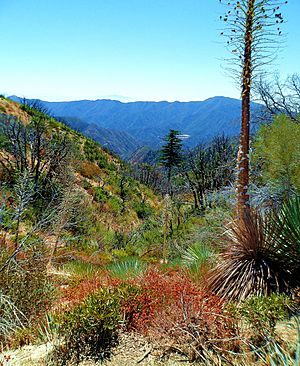 Various mountain plant life with the Chaparral yucca at right.

Much of this National Forest is covered with dense chaparral shrub forests with oak woodlands, which changes to pine and fir-covered slopes in the higher elevations. Subsequent to the fire there was a heavy growth of poodle-dog bush, apparently triggered by the fire's effect on dormant seeds, that lasted for several years. The plant produces prolific lavender flowers. Unfortunately, as visitors to the Forest discovered, contact with it may cause a poison-oak-like rash.

A National Forest Adventure Pass is required for parking at many locations in the Angeles National Forest and other National Forests in Southern California, and this can be obtained online or from visitor centers and local merchants. Los Angeles County has declared that passes are not required on county-maintained roads. There are also many other areas that do not require the pass. 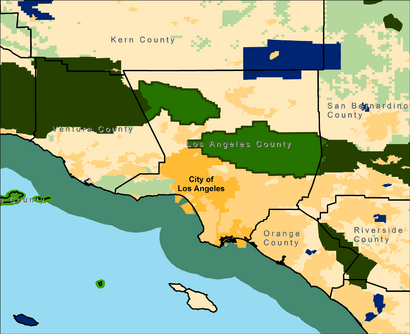 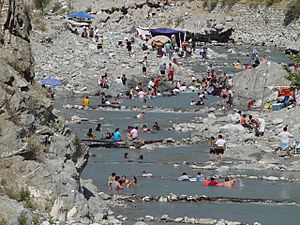 The east fork of the San Gabriel River is one of most visited sites in the forest system. 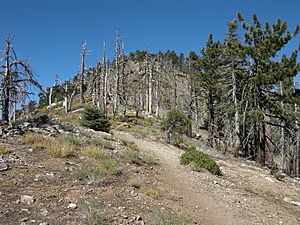 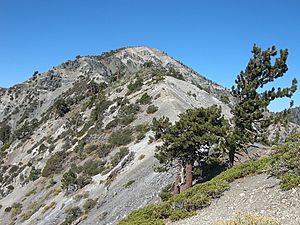 Mountains within the Angeles National Forest include:

All the above mountains are part of the San Gabriel Mountains, except for Burnt Peak, which is in the Sierra Pelona Mountains.

All content from Kiddle encyclopedia articles (including the article images and facts) can be freely used under Attribution-ShareAlike license, unless stated otherwise. Cite this article:
Angeles National Forest Facts for Kids. Kiddle Encyclopedia.