Kids Encyclopedia Facts
Not to be confused with Castac Lake.

Castaic Lake is a reservoir formed by Castaic Dam on Castaic Creek, in the Sierra Pelona Mountains of northwestern Los Angeles County, California, United States, near the town of Castaic.

The California Office of Environmental Health Hazard Assessment has issued a safe advisory for any fish caught in Castaic Lake and Castaic Lagoon due to elevated levels of mercury and PCBs.

The 320,000 acre⋅ft (390,000,000 m3) lake, with a surface elevation of approximately 1,500 feet (460 m) above sea level, is the terminus of the West Branch California Aqueduct, though some comes from the 154-square-mile (400 km2) Castaic Creek watershed above the dam. Castaic Lake is bisected by the Elderberry Forebay Dam, which creates the adjacent Elderberry Forebay. The aqueduct water comes from Pyramid Lake through the Angeles Tunnel and is used to power Castaic Power Plant, a pumped-storage hydroelectric facility on the northern end of the forebay. Water is mostly powering the turbines, rather than being pumped by them. 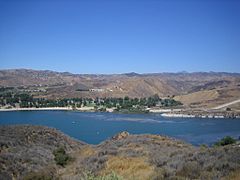 Castaic Lake State Recreation Area is a state park located in northwestern Los Angeles County near the community of Castaic, north of Santa Clarita. It is controlled by the California Department of Parks and Recreation. The recreational area is adjacent to the Angeles National Forest. The 4,224-acre (1,709 ha) park was established in 1965. The area encompasses Castaic Lake. Primary access is via Interstate 5 at exits 176A and 176B at the town of Castaic.

Water from the lake is distributed throughout the northern portion of the Greater Los Angeles Area. Some water is released into Castaic Lagoon below the dam, to maintain its water level for recreation. Castic Lagoon drains into Castaic Creek, which flows south until it meets the Santa Clara River, a few miles west of Santa Clarita.

All content from Kiddle encyclopedia articles (including the article images and facts) can be freely used under Attribution-ShareAlike license, unless stated otherwise. Cite this article:
Castaic Lake Facts for Kids. Kiddle Encyclopedia.