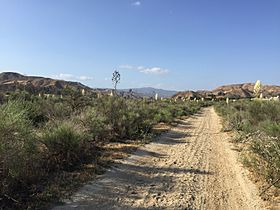 San Francisquito Canyon is home to low-lying shrubs, dry grasses, and towering yucca that bloom during the spring.

The canyon cuts through the Sierra Pelona Mountains, which are central part of the Transverse Ranges system of California. At the San Francisquito Canyon head is the San Francisquito Pass, which the early routes between Los Angeles and the San Joaquin Valley crossed. The canyon grows wider as it approaches the Santa Clarita Valley.

The middle and upper portions of this canyon fall within the Angeles National Forest. 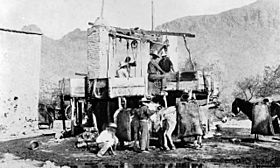 San Francisquito Canyon was the site of placer mining for gold by Spanish missionaries from the San Fernando and San Buenaventura Missions, and later by Mexican Californios. Their activity stopped in 1848, when the gold discovery at Sutter's Mill started the California Gold Rush. Placer mining later occurred in the canyon into at least the late 19th century.

Between 1924 and 1928, the canyon was the site of the St. Francis Dam. At 11:57PM on March 12, 1928, the dam catastrophically failed, and the resulting flood took the lives of as many as 400 people. The collapse of the St. Francis Dam is considered to be one of the worst American civil engineering disasters of the 20th century and remains the second-greatest loss of life in California's history, after the 1906 San Francisco earthquake and fire. The ruins of this disaster can still be seen today. 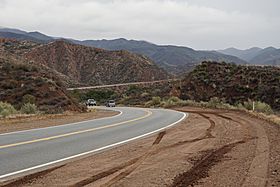 Since 1820, San Francisquito Canyon and San Francisquito Pass were part of the original route of the El Camino Viejo. From 1854, the wagon route of the Stockton - Los Angeles Road followed its course as did the Butterfield Overland Mail in California from 1858 to 1861. This Tejon Pass Route and the Tehachapi or Midway Route (first followed by the Southern Pacific Railroad), remained the major north-south wagon and later automobile routes to the San Joaquin Valley until the construction of the more direct Ridge Route in 1915.

Today, a two-lane road named after the canyon itself connects Santa Clarita to the mountain communities of Green Valley and Elizabeth Lake. It roughly parallels the river's course between San Francisquito Pass and its southern terminus in the northern Santa Clarita Valley.

All content from Kiddle encyclopedia articles (including the article images and facts) can be freely used under Attribution-ShareAlike license, unless stated otherwise. Cite this article:
San Francisquito Canyon Facts for Kids. Kiddle Encyclopedia.