Kids Encyclopedia Facts
Not to be confused with Santa Clara, California.

Santa Clarita, officially the City of Santa Clarita, is the third largest city in Los Angeles County, California, and the seventeenth largest in the state of California. The city has annexed a number of unincorporated areas, contributing to the large population increase. It is located about 35 miles (56 km) northwest of downtown Los Angeles, and occupies most of the Santa Clarita Valley. It is a notable example of a U.S. edge city or boomburb. Santa Clarita was ranked by Money magazine in 2006 as 18th of the top 100 places to live.

Santa Clarita was incorporated in December 1987 as the union of four unincorporated communities, Canyon Country, Newhall, Saugus, and Valencia, all of which are situated on the land of the former Rancho San Francisco. The four communities retain separate identities, and it is common for residents to refer to a specific neighborhood when asked where they are from. Santa Clarita is bounded on the west by the Golden State Freeway (I-5). The Antelope Valley Freeway (SR-14) runs northeast-southwest through an irregular east border, and the Newhall Pass is the city's southernmost point.

Santa Clarita is often associated with the Six Flags Magic Mountain amusement park, though the park is located just outside the city limits, and the California Institute of the Arts (CalArts), located in Valencia. 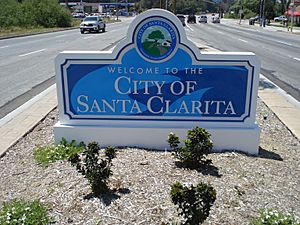 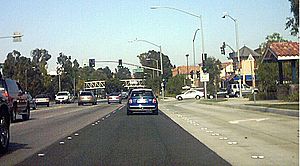 A typical stretch of Valencia Boulevard in the Valencia part of Santa Clarita in July 2004. The bridge in the distance carries a paseo (a type of dedicated pedestrian pathway) over the roadway.

Santa Clarita was incorporated in December 1987, but its history stretches back several centuries. About AD 450, the Tataviam arrived, numbering around 2,000 at their zenith.

In 1842, Francisco Lopez made the first "documented" discovery of gold in California. The event is memorialized in an 1842 mining claim issued by Gov. Juan B. Alvarado. The discovery was made in Placerita Canyon, an area later used as Hollywood's original back lot.

The community of Newhall is named after Henry Newhall, a businessman who made his fortune during the California Gold Rush after opening up the H.M. Newhall & Company, a successful auction house in San Francisco. Newhall's next business interest was railroads. He invested in rail companies that would connect San Francisco to other cities and became president of the San Francisco and San Jose Railroad. In 1870, he and his partners sold the company to Southern Pacific Railroad, on whose board of directors he then sat.

After railroads, Newhall turned to real estate and ranching. He purchased a number of the old Spanish and Mexican land grants in the state for a total of 143,000 acres (58,000 ha) between Monterey and Los Angeles counties. The most significant portion was the 46,460 acres (18,800 ha) Rancho San Francisco in northern Los Angeles County, which he purchased for $2/acre, and which became known as Newhall Ranch after Newhall's death. Within this territory, he granted a right-of-way to Southern Pacific through what is now Newhall Pass, and he also sold them part of the land, upon which the company built a town named after him: Newhall. The first station built on the line he named for his hometown, Saugus, Massachusetts. After his death, Newhall's heirs incorporated the Newhall Land and Farming Company, which oversaw the development of the communities that now make up Santa Clarita.

On September 26, 1876, Charles Alexander Mentry brought in the state's first productive oil well at Mentryville, giving rise to the California oil industry. The oil was brought to a refinery at Newhall, now the oldest existing petroleum refinery in the world; it was operational from 1874 to 1888.

A few days earlier, on September 5, 1876, Charles Crocker and Leland Stanford joined their railroads in Canyon Country, linking Los Angeles with the rest of the nation for the first time.

The Saugus Cafe, on Railroad Avenue in Saugus, was established in 1887 and appears to be, by far, the oldest still-operating restaurant in Los Angeles County.

Filming in Santa Clarita began shortly after the turn of the 20th century with a veritable Who's Who of actors, including William S. Hart, Tom Mix, Harry Carey and a young John Wayne. Hart and Carey made their homes in the Santa Clarita Valley; today both are operated as county parks.

The Santa Clarita Valley was the scene of the second worst disaster in California's history in terms of lives lost, known as the "worst civil engineering failure of the 20th century". Shortly before midnight on March 12, 1928, the St. Francis Dam collapsed. By the time the floodwaters reached the Pacific Ocean near Ventura five hours later, nearly 600 people were dead. Within modern Santa Clarita city limits, the present day site of the Westfield Valencia Town Center mall would have been buried beneath muck, mud and debris. Some buildings in Newhall became makeshift morgues.

After failed attempts to form a city and at least two failed attempts to form a separate county, the people of the Santa Clarita Valley finally incorporated the City of Santa Clarita at 4:30 PM on December 15, 1987 after voting in favor of incorporation by a margin of two to one in that year's general election. The other proposed name for the new city, which was narrowly defeated, was "City of the Canyons."

Santa Clarita is near the San Fernando fault zone and was affected by the 1971 San Fernando earthquake, also known as the Sylmar quake. The city was also affected by the 1994 Northridge earthquake, and many commercial and residential buildings were devastated by its aftermath, including the nearby Newhall Pass, the Valencia Town Center, and Six Flags Magic Mountain. Magic Mountain's 38-story Sky Tower swayed six feet in each direction during the Northridge earthquake with only minor damage.

Santa Clarita is within a Mediterranean climate zone, characterized by warm and dry days most of the year with mild-moist winters. During the summer, hot weather is predominant with occasional high humidity and cumulus buildups over the higher terrain surrounding the valley. During influxes of monsoonal moisture in the summer, thunderstorms sometimes occur. Due to its close proximity to the Mojave/Upper Desert and Pacific Ocean, varying micro-climates are common.

Characterized by dry hills covered in brush and chaparral, late summer and early autumn are often referred to as "fire season." Moreover, wildfire activity occurs throughout the year during drought conditions. The warmest months are July through September, although it is not unusual to have hot weather in early October. During this time, temperatures typically remain in the high 90s and low 100s, but temperatures can reach as high as 117 degrees, as it did in September 2010. Winters are mild, with temperatures dropping below freezing only occasionally on clear winter nights. Rain falls primarily from December through February. The area received measurable snow on January 2, 2011 (1-4 inches). Snow was also seen on February 26, 2011 and April 8, 2011, where some areas received a dusting.

According to the Census Bureau, Santa Clarita had a median household income of $82,607, with 9.5% of the population living below the federal poverty line.

There were 50,787 households out of which 44.4% had children under the age of 18 living with them, 61.0% were married couples living together, 9.8% had a female householder with no husband present, and 24.7% were non-families. 18.7% of all households were made up of individuals and 6.1% had someone living alone who was 65 years of age or older. The average household size was 2.95 and the average family size was 3.38.

All content from Kiddle encyclopedia articles (including the article images and facts) can be freely used under Attribution-ShareAlike license, unless stated otherwise. Cite this article:
Santa Clarita, California Facts for Kids. Kiddle Encyclopedia.