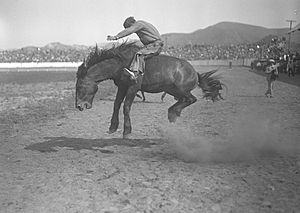 Saugus is a neighborhood in Santa Clarita, California. It was one of four communities (with Valencia, Newhall and Canyon Country) that merged in 1987 to create the city of Santa Clarita. Saugus includes the central and north-central portions of the city. It is named after Saugus, Massachusetts, the hometown of Henry Newhall, upon whose land the town was originally built.

All content from Kiddle encyclopedia articles (including the article images and facts) can be freely used under Attribution-ShareAlike license, unless stated otherwise. Cite this article:
Saugus, Santa Clarita, California Facts for Kids. Kiddle Encyclopedia.