Newhall Pass is a low mountain pass in Los Angeles County, California. Historically called Fremont Pass and San Fernando Pass, with Beale's Cut, it separates the Santa Susana Mountains from the San Gabriel Mountains. Although the pass was originally discovered in August 1769 by Catalan explorer Gaspar de Portolá, it eventually was named for Henry Newhall, a significant businessman in the area during the 19th century.

Newhall Pass links the San Fernando Valley to the Santa Clarita Valley and is a main entry to the Greater Los Angeles area. The pass is known for the massive Newhall Pass interchange and the historic San Fernando Tunnel.

Weather conditions in the pass can vary from triple-digit heat in the summer to rare below freezing temperatures in winter. Snow is possible from December to February, but is quite uncommon; when it does occur, it can lead to heavy traffic and accidents. The pass also is susceptible to heavy flooding during La Niña and El Niño events. Wildfires have also occasionally closed down the pass and California State Route 14.

Newhall Pass was initially named 'Fremont Pass' for General John C. Frémont, who was thought to have passed through it in 1847 on his way to sign the Treaty of Cahuenga, but he actually went slightly east of the pass on the El Camino Viejo.

In 1853, a Los Angeles businessman, Henry Clay Wiley installed a windlass atop the Fremont Pass to speed and ease the ascent and descent of the steep Santa Clara Divide. He also built a tavern, hotel and stable nearby. In 1854, Wiley sold out to Sanford and Cyrus Lyon and it began to be called Lyons Station. At the same time Phineas Banning obtained the business of supplying Fort Tejon. 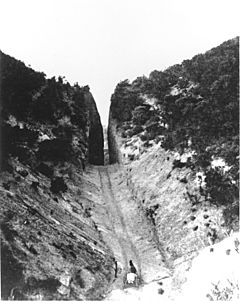 The steep pass was made easier to cross with a deep slot-like road cut by Charles H. Brindley, Andrés Pico, and James R. Vineyard, to whom the State of California awarded a twenty-year contract to maintain the turnpike and collect tolls. Thus, the "San Fernando Mountain," the most daunting obstacle along the Fort Tejon Road, the main inland route from Los Angeles to the north, was cut through. Butterfield Overland Mail, a stagecoach that operated mail between St. Louis, Missouri and San Francisco began using it directly.

In 1861, a landowner and surveyor named Edward Beale was appointed by President Abraham Lincoln as the federal Surveyor General of California and Nevada. Beale challenged General Pico's loyalty to the new president and in 1863, Beale was awarded the right to collect the toll in the pass. Beale maintained rights to the cut for the next twenty years and so it became known as "Beale's Cut."

Beale's Cut was eventually deepened to 90 feet (27.4 m). It lasted as a transportation passage in the neighborhood of present-day Newhall Pass until construction of the Newhall Tunnel was completed in 1910.

Beale's Cut appeared in many silent western movies. The location became a favorite of movie producers like John Ford and D. W. Griffith. In Ford's 1923 film Three Jumps Ahead American film actor Tom Mix is filmed jumping over the pass. John Ford used the location in at least four films over a twenty-year period beginning as early as 1917. 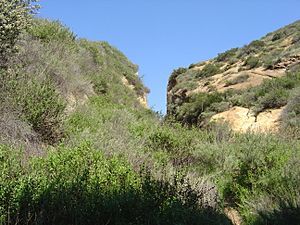 Still in existence today, it is no longer passable by automobiles. Sometime in the late 20th century it suffered a partial collapse, and now is about 30 feet (9.1 m) deep. It is visible from the Sierra Highway about one mile north from the intersection of The Old Road and Sierra Highway, just after the first bridge under SR 14. It lies between Sierra Highway and the new freeway, about a quarter mile to the northeast of a stone marker. Beale's Cut is difficult to find today because it is fenced off and not close enough to the Sierra Highway to be easily seen. 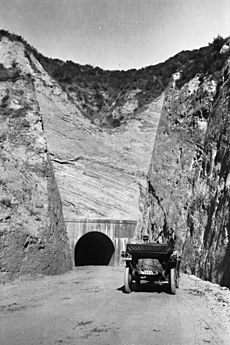 Newhall Pass is named after businessman Henry Newhall, whose land holdings formed the basis of the city of Santa Clarita. Newhall came to California from Saugus, Massachusetts during the California Gold Rush in 1850. Over time he purchased a number of properties in the state, the most significant being the 46,460-acre (188 km2) Rancho San Francisco in northern Los Angeles County. Within this territory, he granted a right-of-way to Southern Pacific through what is now Newhall Pass, and he also sold them a portion of the land, upon which the company built a town they named after him: Newhall. The first station built on the line he named for his hometown, Saugus. After his death in 1882 his family incorporated the Newhall Land and Farming Company. 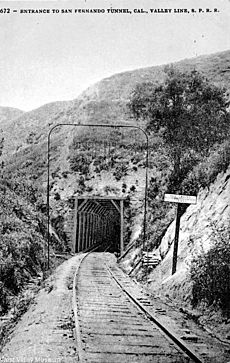 Metrolink's Antelope Valley Line and the Union Pacific Railroad (formerly Southern Pacific Railroad) go through the pass via the San Fernando Tunnel. The 6,940-foot-long railroad tunnel (2,115.3 m) took a year and a half to complete. Over 1,500 mostly Chinese laborers took part in the tunnel construction, which began at the south end of the mountain on March 22, 1875. Many of them had prior experience working on Southern Pacific's tunnels in the Tehachapi Pass. Due to the sandstone composition of the mountain that was saturated with water and oil, frequent cave-ins occurred and the bore had to be constantly shored up by timbers during excavation.

The initial location for the north end of the tunnel was near Lyons Station Stagecoach Stop, which was abandoned due to frequent cave-ins caused by oil soaked rock. The north end was moved a little further west towards the present town of Newhall, California. The north end of the tunnel excavation commenced in June 1875. Water was a constant problem during construction and pumps were utilized to keep the tunnel from flooding. Workers digging from both the north and south ends of the tunnel came face to face on July 14, 1876. The bores from each end were only a half inch out of line with dimensions of 22 feet (6.7 m) high, 16.5 feet (5.0 m) wide at the bottom and over 18 feet (5.5 m) at the shoulders. Track was laid in place during the tunnel dig and was used to remove dirt and rock by horse pulled cars. The first train passed through the tunnel on August 12, 1876. On September 4 Charles Crocker notified Southern Pacific that the track had been completed on the route between San Francisco and Los Angeles.

All content from Kiddle encyclopedia articles (including the article images and facts) can be freely used under Attribution-ShareAlike license, unless stated otherwise. Cite this article:
Newhall Pass Facts for Kids. Kiddle Encyclopedia.