Kids Encyclopedia Facts
Not to be confused with Santa Clara Valley.

The Santa Clarita Valley (SCV) is part of the upper watershed of the Santa Clara River in Southern California. The valley was part of the 48,612-acre (19,673 ha) Rancho San Francisco Mexican land grant. Located in Los Angeles County, its main population center is the city of Santa Clarita which includes the communities of Canyon Country, Newhall, Saugus, and Valencia. Adjacent unincorporated communities include Castaic, Stevenson Ranch, Val Verde, and the unincorporated parts of Valencia.

The Santa Clarita Valley is bordered by the Lake Piru area, including the community of Val Verde, Los Padres National Forest, and Castaic Lake to the northwest, Sierra Pelona Mountains and Angeles National Forest to the north and northeast, San Gabriel Mountains to the east and southeast, and Santa Susana Mountains to the south and southwest, and Ventura County and the Santa Clara River Valley to the west. To the west-northwest lies the Topatopa Mountains.

Santa Clarita Valley is connected to a wide array of other nearby valleys: the San Fernando Valley and Los Angeles Basin via Newhall Pass to the south; Antelope Valley via CA 14 through Soledad Canyon to the northeast; and the San Joaquin Valley via I-5 through Tejon Pass to the northwest.

Downstream lies the Santa Clara River Valley, which was given the moniker Heritage Valley by the tourism bureau representing Piru, Fillmore, and Santa Paula. Upstream is Soledad Canyon which contains the communities of Vincent, Acton, Ravenna, and Agua Dulce. 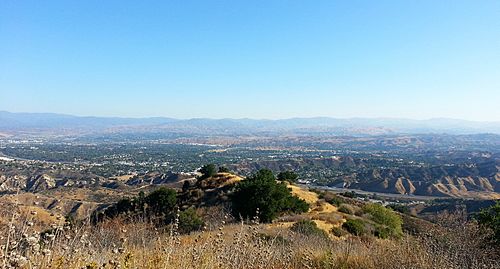 Elementary school students in Santa Clarita are served by the Castaic, Newhall, Saugus, and Sulphur Springs school districts. Junior high and high schools are part of the William S. Hart Union High School District, except for Castaic Middle School which is in the Castaic Union School District.

The unincorporated mountain communities of Acton and Agua Dulce are served by the Acton-Agua Dulce Unified School District, which serves students from kindergarten through 12th grade.

There are three institutions of higher education in the valley: College of the Canyons, California Institute of the Arts, and The Master's University.

All content from Kiddle encyclopedia articles (including the article images and facts) can be freely used under Attribution-ShareAlike license, unless stated otherwise. Cite this article:
Santa Clarita Valley Facts for Kids. Kiddle Encyclopedia.