Fillmore is a small city in Ventura County, California, United States, in the Santa Clara River Valley. In an agricultural area with rich, fertile soil, Fillmore has a historic downtown that was established when the Southern Pacific built the railroad through the valley in 1887. The rail line also provided a name for the town: J. A. Fillmore was a general superintendent for the company's Pacific system. The population was 15,002 at the 2010 census, up from 13,643 at the 2000 census.

In 1769, the Spanish Portola expedition, first Europeans to see inland areas of California, came down the valley from the previous night's encampment near today's Rancho Camulos and camped in the vicinity of Fillmore on August 11. Fray Juan Crespi, a Franciscan missionary travelling with the expedition, had previously named the valley Cañada de Santa Clara. He noted that the party travelled about 9–10 miles and camped near a large native village.

Founded in 1887 upon the arrival of the Southern Pacific Rail line, the city voted to incorporate in 1914.

Fillmore is a small town in the Santa Clara River Valley below the San Cayetano Mountain peak in the Los Padres National Forest. Fillmore is within a historic Ventura County agricultural and tree-farming belt. It is home to the Fillmore Unified School District. Educational facilities for this district include two high schools, one middle school, and four elementary schools. A fifth elementary school is located in the city of Piru, which is also a part of the school district. Another K-8 private school, the Fillmore Christian Academy, is also located in the city. Sespe Condor Sanctuary, where the critically endangered California condor is recovering, lies to the north. The nearby Sespe Creek is a tributary of the Santa Clara River. According to the United States Census Bureau, the city has a total area of 3.4 square miles (8.8 km2), 99.97% of it land and 0.03% of it water.

This region experiences hot and dry summers. Temperatures can easily reach above 100 degrees . According to the Köppen Climate Classification system, Fillmore has a warm-summer Mediterranean climate, abbreviated "Csb" on climate maps. 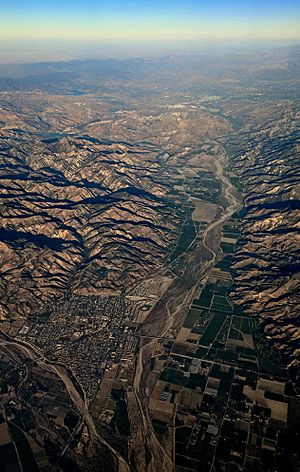 Late-afternoon aerial view of Fillmore (left foreground) and the Santa Clara River Valley. State route 126 runs along the valley, to Castaic Junction at the east end.

Fillmore is at the east end of the Ventura Intercity Service Transit Authority Highway 126 route that originates at the Pacific View Mall in Ventura, and operates along SR 126 to Saticoy, Santa Paula and Fillmore.

Fillmore will have its first regularly scheduled bus service. Fillmore will have a single bus on a 30-minute loop throughout the city, and one route running between Fillmore and Piru. Both city bus systems will connect to the regional Highway 126 bus to Ventura, with free, timed transfers.

Scheduled service began in 2015 for the Heritage Valley communities with two routes in Santa Paula, one route in Fillmore and one in Piru that runs to Fillmore. They are designed to mesh with the schedule of the VISTA Highway 126 route. 16-seat buses are used on the Valley Express. The dial-a-ride services in both cities, which for now are the only public transit option, will remain in operation after the bus routes start.

Fillmore's economy is still largely driven by agriculture. Most agricultural industry in the Fillmore area is related to orange, lemon, avocado orchard farming and packing and, more recently, specimen tree farming. To a lesser extent, row crop farming and small industry and assembly are also present in and near Fillmore and in other parts of the Santa Clara River Valley. The single largest employer is the Fillmore Unified School District.[1]

In 2014, a plan was presented for a business park on the old Chevron refinery property east of Fillmore. 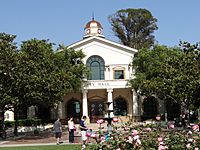 Fillmore has a classic "turn of the 20th century" downtown architecture, the one-screen Fillmore Towne Theatre, and many unique shops and businesses, including the Giessinger winery. Adjacent to the railroad tracks and a much-photographed city hall is the Railroad Visitor Center operated by the Santa Clara River Valley Railroad Historical Society, which has many displays as well as a fully operational 90-foot (27 m) train turntable and several restored railroad cars.

A short walk down Main Street from the Railroad Visitor Center is the Fillmore Historical Museum, which includes the restored Southern Pacific Railroad Fillmore 1887 standard-design One Story Combination Depot No. 11 built in 1887, a 1956 Southern Pacific railroad caboose, and railroad-related displays. The small post office from the community of Bardsdale and a 1919 farm worker bunkhouse from Rancho Sespe were moved to the site along with the 1906 Craftsman-style Hinckley House, the home of the community's first dentist and druggist. The bunkhouse contains many displays illustrating the history of Fillmore and the nearby communities of Bardsdale and Piru.

The Fillmore and Western Railway trains take tourists through the orchards. The nearby Elkins Ranch Golf Course, est. 1962, was closed in Sept. 2020 and converted to an avocado orchard. Also located nearby are a fish hatchery and the Sespe Creek and Sespe Wilderness, home to the California condor Sespe sanctuary.

Fillmore has provided a commercial and business center for the small community of Bardsdale, which is located about three miles (5 km) south of Fillmore, directly across the Santa Clara River.

The city is served by the Fillmore Unified School District. Educational facilities for the district include two high schools including, one middle school, and four elementary schools.

A fifth elementary school is located in the city of Piru, which is also a part of the school district. The Fillmore Christian Academy is a private K-8 school in town.

All content from Kiddle encyclopedia articles (including the article images and facts) can be freely used under Attribution-ShareAlike license, unless stated otherwise. Cite this article:
Fillmore, California Facts for Kids. Kiddle Encyclopedia.