The Fillmore and Western Railway (reporting mark FWRY) is a railroad owned by the Fillmore and Western Railway Company. The company operates on track owned by the Ventura County Transportation Commission. The majority of F&W rolling stock was acquired from four major studios: 20th Century Fox, Paramount, Warner Bros, and MGM. The rolling stock and right-of-way are frequently used for the filming of television series, motion pictures and commercials and as a locale for private and commercial still photography. Visitors to Fillmore often see filming activity as well as sets and support equipment at the company's rail yard and along the tracks between Santa Paula and Piru.

The F&W has been used in more than 400 movie, TV and commercial shots. Movies shot on the railroad include Throw Momma from the Train, Three Amigos, Seabiscuit, Get Smart, Rails & Ties and Race to Witch Mountain. Television series ', NCIS: Los Angeles and Criminal Minds have used the railroad for location shooting. The railway also featured in the documentary series Mystery Diners 'as itself'.

The track is a standard gauge railroad constructed in 1887 by Southern Pacific Railroad through the Santa Clara River Valley in Ventura County, California. This line was originally part of the Southern Pacific's main line between San Francisco and Los Angeles before the shorter Montalvo Cutoff was built through the Santa Susana Mountains in 1904. State Route 126 follows roughly the same route from Ventura to Santa Clarita. The track was used extensively by Southern Pacific as late as the 1950s to haul citrus from packing houses at the communities along the Santa Clara River. In 1995, the branch line that connects at its west end to the Union Pacific at Montalvo in Ventura was purchased from Southern Pacific by the Ventura County Transportation Commission. The eastern end of the line now terminates in Piru as storm damage in 1979 severed the eastern end of the line to Saugus in Los Angeles County.

Short Line Enterprises was a company that provided railcars for use in movie productions. They came to Fillmore in 1991 to use the rail line and eventually added tourist and dinner trains. 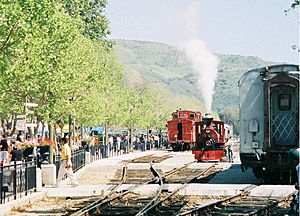 Transportation planners in the Southern California region have been studying the feasibility of restoring the eastern end of the line between Santa Paula and Santa Clarita in order to establish Metrolink service, at least since 1991. This would require bringing existing track up to passenger standards, adding passing sidings and acquisition of new right-of-way for track between the current eastern terminus of the line located just west of Interstate 5 (I-5) and Metrolink's Antelope Valley line. The new line would also require construction of a bridge over the south fork of the Santa Clara River and an at-grade crossing or a flying junction at San Fernando Road. This line would have the potential to relieve some of the current commuter load on the I-5 corridor between State Route 126 and State Route 14 as well as providing future commute options for housing development in northern Los Angeles County and Ventura County communities in the Santa Clara River Valley.

Ventura County Transportation Commission reached a settlement with Fillmore and Western Railway, trains will continue to operate for at least until 2021.

The roster of the F&W includes two GP35s, two F7s from General Motors Electro-Motive Division and an S6 and RS32 from Alco. The railroad also owns numerous coaches, freight cars, cabooses and excursion cars. The F&W roster also includes an Ex-Duluth and Northeastern Baldwin #14 2-8-0 Consolidation steam locomotive. In 2014, a 0-4-0T Porter tank engine, the Sespe, was sold to the city of Jacksonville, Oregon.

The railroad also owns the two full-size steam locomotive props that were built for The Lone Ranger (2013). They are not working steam locomotives (and never were), being propelled instead by diesel engines located in their tenders. The larger of the two (named "Constitution" in the film) has been used in several other productions, including Westworld and The Good Place.

The Thomas the Tank Engine train is actually powered by a diesel at the other end in a push-pull operation down the F&W branch line towards Piru.

Fillmore and Western Railway tracks. The ex-Canadian turntable is being installed just on the other side of the buildings on the left of the photograph.

The rail yard is located adjacent to the restored city hall in downtown Fillmore and is part of the revitalized section of the city rebuilt after the extensive damage caused by the 1994 Northridge earthquake that brought down the facades of many nearby businesses. A vintage 1906 80-ton turntable bridge originally installed in Capreol, Ontario, was purchased from the Canadian National Railway by the Santa Clara River Valley Railroad Historical Society (SCRVRHS) and was installed in a newly constructed pit on February 7, 2007. The turntable allows not only turning of locomotives and cars but also access to planned facilities on tracks in the narrow yard area. This area is planned to be the center of a proposed railway heritage park complex that will also feature a roundhouse and a Railroad Interpretive Center Museum.

All content from Kiddle encyclopedia articles (including the article images and facts) can be freely used under Attribution-ShareAlike license, unless stated otherwise. Cite this article:
Fillmore and Western Railway Facts for Kids. Kiddle Encyclopedia.