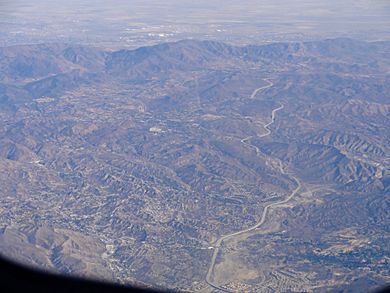 Aerial view of Soledad Canyon, with the Antelope Valley Freeway winding up through it from Santa Clarita toward Palmdale. Agua Dulce is visible in the center of the image, just left of the freeway.

The canyon lies between the Sierra Pelona Mountains towards the northwest and the San Gabriel Mountains to the southeast, starting at the northeastern end of Santa Clarita Valley. Traveling northeast through the canyon, it gradually slopes up until the unincorporated community of Acton, near which the Santa Clara River continues east towards its headwaters among the San Gabriel Mountains. Turning north towards Palmdale, the canyon terminates at Soledad Pass, just a few miles south of Lake Palmdale.

Soledad Canyon also contains the localities of Vincent, Acton, Ravenna, and Russ. Agua Dulce is just north of the canyon.

Soledad Canyon was a vital part of Los Angeles' transportation history. Transit between Los Angeles and the Central Valley was always difficult–in the "Gold Rush era" and stagecoach days the ride was extremely difficult, almost straight up-and-down through San Fernando Pass, up San Francisquito canyon, and over Tejon Pass. In 1856, Lieutenant Williamson, on a railroad surveying party, "discovered" that the pass, sometimes named "Williamson Pass", could provide the lower grades to make Los Angeles–Central Valley train travel possible by the roundabout detour all the way to Mojave, and over Tehachapi Pass, almost 70 miles farther than the direct Interstate 5 used today by trucks and autos.

In the mid 1870s, the first rail line was laid down in Soledad Canyon. On September 5, 1876, then president of the Southern Pacific Railroad Charles Crocker drove a golden spike at Lang Southern Pacific Station to complete the San Joaquin Valley Line, the first rail line linking Los Angeles to San Francisco and the First Transcontinental Railroad. 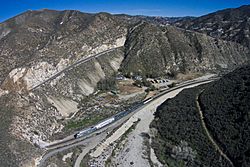 The canyon was chosen as the state's preferred alternative for the route of the planned California High-Speed Rail line between Burbank Airport and Palmdale. Project maps outline five tunnels to be excavated through the mountainsides, crossing State Route 14 once on an elevated structure. Trains may start running in 2033.

The Pacific Crest Trail traverses the western reaches of the canyon north to south. Descending the southern slopes of the Sierra Pelona Mountains, the trail passes through Agua Dulce and Vazquez Rocks before winding up a mountain ridge. It then descends into the primary reach of Soledad Canyon, passing beneath the tracks of the Antelope Valley Line and crossing the Santa Clara River before continuing up into the San Gabriel Mountains.

All content from Kiddle encyclopedia articles (including the article images and facts) can be freely used under Attribution-ShareAlike license, unless stated otherwise. Cite this article:
Soledad Canyon Facts for Kids. Kiddle Encyclopedia.