Kids Encyclopedia Facts
This page is about the Castaic-Tejon Route in California. For the Ridge Route in ancient Israel, see Way of the Patriarchs. 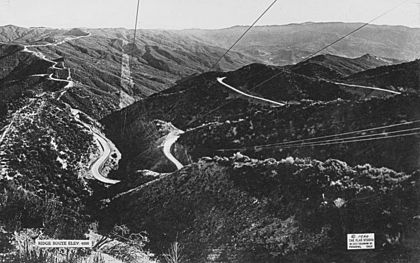 The Ridge Route, officially the Castaic-Tejon Route, was a two-lane highway between Los Angeles and Kern counties, California. Opened in 1915 and paved with 15-ft concrete between 1917 and 1921, the road was the first paved highway directly linking the Los Angeles Basin with the San Joaquin Valley over the Tejon Pass and the rugged Sierra Pelona Mountains ridge south of Gorman. Much of the old road runs through the Angeles National Forest, and passes by many historical landmarks, including the National Forest Inn, Reservoir Summit, Kelly's Half Way Inn, Tumble Inn, and Sandberg's Summit Hotel. North of the forest, the Ridge Route passed through Deadman's Curve before ending at Grapevine.

Most of the road was bypassed in 1933–34 by the three-lane Ridge Route Alternate, then U.S. Route 99 (US 99), to handle increased traffic and remove many curves. The four-lane US 99 was completed in 1953 and replaced by a freeway, Interstate 5 (I-5) around 1968. The portion of the road within the Angeles National Forest was added to the National Register of Historic Places in 1997, following the efforts of Harrison Scott. Much of the road has been closed by the U.S. Forest Service; other remnants of the road are used by local traffic.

Before the Ridge Route

An alternate route between Los Angeles and Bakersfield followed the southern approach to the Ridge Route to Saugus, but took a longer route between Saugus and Gorman, heading northeast through the San Francisquito Canyon to the Antelope Valley and west to Gorman. The rest of the route, from Gorman toward Bakersfield via the Tejon Pass, followed the same path as the Ridge Route.

The Butterfield Overland Stage, the first overland mail service to California, went from Tipton, Missouri and Memphis to San Francisco via Los Angeles. From October 1858, when the first stage passed through Tejon Pass, until April 1861, the route was identical to El Camino Viejo, running via San Francisquito Canyon. In order to keep the stages from running directly northwest from San Bernardino and bypassing Los Angeles, the Los Angeles County Board of Supervisors spent $8000 in 1858 (about $NaN in 2015) to deepen the cut—later Beale's Cut—at San Fernando Pass, south of Saugus and Newhall (east of Sierra Highway, west of the Antelope Valley Freeway or State Route 14). The path followed by the stages was changed to pass along the Pacific Coast from Los Angeles in April 1861.

Similarly, the residents of the City of Los Angeles approved the expenditure of a good deal of money towards the building of the Southern Pacific Railroad, which had originally planned to bypass the city. The line to San Francisco, including the 6,966-foot (2,123 m) San Fernando Tunnel through San Fernando Pass, was completed on September 5, 1876. The railroad's route between Saugus and Bakersfield was even longer than that of El Camino Viejo and the Butterfield Overland Stage, heading east through Soledad Canyon before turning north via Palmdale to Mojave and northwest over Tehachapi Pass.

In the 1910s, several power companies built lines through the area. The General Pipe Line Company completed an oil pipeline connecting the San Joaquin Valley's Midway-Sunset Oil Field with the port at San Pedro in 1913. Its alignment followed the Ridge Route north of Gorman and south of Reservoir Summit, a longer distance than any of the earlier transportation routes, but from Gorman south to the present location of Pyramid Lake, where it turned east to Reservoir Summit, it roughly followed the later Ridge Route Alternate. That same year, the Midway Gas Company opened a natural gas line, and the Pacific Light and Power Company opened a power line, both staying fairly close to the entire Ridge Route.

The two general routes followed by the Butterfield Overland Stage and the Southern Pacific Railroad—known respectively as the Tejon Pass Route - were the main automobile routes between Los Angeles and the San Joaquin Valley around the start of the 20th century. The State Bureau of Highways recommended in 1895 that a more direct route be built to shorten this distance. A bond issue was approved in 1909 and 1910 to build a state highway system, including the Ridge Route. The new California Highway Commission was unable to raise funds in the East, but Los Angeles again contributed funds to ensure that construction would go forward.

These routes all shared the roadway south of Saugus, which was generally flat but included the crossing of San Fernando Pass. As discussed earlier, this was deepened at the county's expense in 1858. The California State Legislature authorized a turnpike in 1861, and it was completed in 1863, then owned by Edward Fitzgerald Beale. The cut, which came to be known as Beale's Cut, was deepened by Beale, and lowered once more by the county in 1904. To improve the crossing, the county bypassed the cut with the narrow 435-foot (133 m) Newhall Tunnel, for railroad traffic only, which opened in October 1910.

The California Highway Commission considered several easterly routes between Saugus and Gorman: Soledad Canyon (used by the Southern Pacific) had frequent washouts; Mint Canyon (used by the Midway Route) was too long and cost too much; Bouquet Canyon (used by both automobile routes) had bad drainage; and San Francisquito Canyon (used by the Tejon Pass Route) was steep and narrow. Another possible route, through Piru Canyon to the west, was rejected because of a proposal for a dam. This route was later chosen for the Ridge Route Alternate, but had to be abandoned in the 1970s due to the construction of Pyramid Lake. 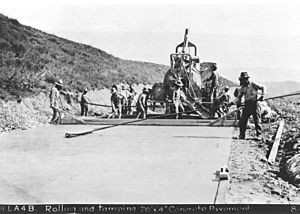 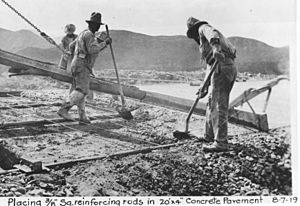 Thus, the route chosen was a direct line between Saugus and Gorman, over the top of the ridge for many miles. Due to cost and drainage concerns, and a desire to reduce altering the terrain, the road was built with 697 curves, high in the mountains. Construction on the Ridge Route, officially considered to run from Castaic Junction (west of Saugus on the road to Ventura) to the bottom of the grade at Grapevine, began in 1914. The highway was one of the earliest projects completed by the California Highway Commission. To construct the road, horse-drawn scrapers were used.

The new road, designed with an ideal grade of 6 percent (but with several 7 percent grades, including at Grapevine,) cut the distance by 24 miles (39 km) over the Tejon Pass Route or 58 miles (93 km) over the Midway Route. A speed limit of 15 miles per hour (24 km/h) was enforced between Castaic and Quail Lake, making the trip from Los Angeles to Bakersfield take about 12 hours. On the 48-mile (77 km) Ridge Route, between Castaic Junction and Grapevine, the curves added up to a total of about 109.5 complete circles, with a minimum radius of 70 feet (21 m). The unpaved road, which had cost $450,000 (about $NaN in 2015) , opened in October 1915.

In addition to being part of the state highway system (as a portion of the unsigned Sacramento-Los Angeles Legislative Route 4), the road was also part of the National Park to Park Highway, a privately designated auto trail, and became part of US 99 in 1926. The continuation south via Saugus and the Newhall Tunnel towards Los Angeles, also part of Route 4, was added to the state highway system in 1917.

According to the San Francisco Chronicle, the new route was "one of the most remarkable engineering feats accomplished by the State Highway Commission. It is Southern California's Magnus Opus [sic] in mountain highway construction." It was also credited with stopping efforts to split California into two states, by linking its two halves over the rugged terrain separating them.

Work on paving the Ridge Route with 20-foot (6.1 m) wide and 4-inch (100 mm) thick reinforced concrete began in 1917, but was delayed until 1919 by the U.S. entry into World War I. During work on the road, traffic was detoured via Mint and Bouquet Canyons. The road was reopened on November 15, 1919, completely paved except north of Lebec, including the grade at Grapevine, which was only oiled. After a bond issue was passed in July 1919, this portion was paved from September 1919 to May 1921; the dangerous detour included a 20 percent grade. This paving added about $1 million to the cost, for a total price of about $1.5 million (about $NaN in 2015) , which was not paid off until 1965. Asphalt was added on top of the concrete for 20 miles (32 km) south from Swede's Cut in 1922, and in 1924 a number of dangerous blind curves were widened and straightened.

Bypasses and the fate of the bypassed road 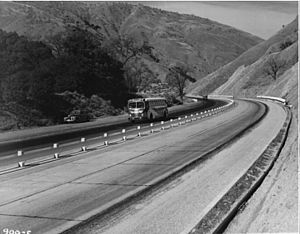 The Ridge Route Bypass in 1943, looking north towards Grapevine

In 1929, the state decided to build a new bypass of the central portion through Piru Canyon, and to upgrade the northern portion over Tejon Pass and down the hill at Grapevine. This Ridge Route Alternate, or Ridge Alternate Highway, shortened the route by 9.6 miles (15.4 km) and increased the minimum curve radius from 70 to 1,000 feet (21 to 305 m). This was done over concerns regarding the safety of the road, which had a high number of traffic accidents, as well as the highway's increased use. The old highway was to be relinquished to Los Angeles County, and incorporated into the county road system. Construction began in 1930, and the road south of Tejon Pass was officially opened on October 29, 1933; replacement of the Grapevine grade was completed by 1936. The road, which included a center "suicide" passing lane, cost $3.5 million (about $NaN in 2015) , paid for by the state gas tax. It was estimated that it would pay itself off in 2.5 years with the savings in time and gas. A new bypass of the Newhall Tunnel, through Weldon Canyon, had been opened on May 28, 1930, thus giving drivers a better route all the way from Los Angeles to Bakersfield. The roadway was widened to an expressway by 1952 at a cost of $13.5 million (about $NaN in 2015), providing two lanes in each direction and a center median, but retaining at-grade intersections.

Even this four-lane Ridge Route Alternate was not adequate for the volume of traffic using the road, and construction of the eight-lane freeway I-5 with a minimum curve radius of 3,000 feet (910 m) began in June 1963. Large parts of the Ridge Route Alternate were incorporated into the new roadway, but the area through the present Pyramid Lake was completely bypassed. I-5 over the mountains between Castaic Junction and Grapevine was completed on August 24, 1970, at a cost of $103 million (about $NaN in 2015). 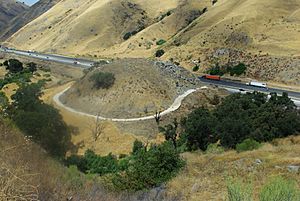 A section of the 1915 Ridge Route in Lebec, abandoned when US 99 (later upgraded to I-5) was constructed over the Tejon Pass in order to make the travel straighter and safer

Meanwhile, portions of the old road continued to exist in as a county road. The longest preserved segment was the part completely bypassed by the Ridge Route Alternate, between Castaic and SR 138 near Sandberg, including the portion through the Angeles National Forest. The road for about two miles (3.2 km) south from SR 138 is part of CR N2.

Harrison Scott, a retired engineer, was traveling north on I-5 with his son in 1991, when his son speculated about the difficulty of driving over the first road through the rugged terrain. Having some extra time, and recalling a drive on the old road in 1955, they left the freeway and traveled along most of the abandoned section. Near SR 138, Scott asked a county road crew which was resurfacing the road if it was still maintained by the county, and the crew replied that they didn't know who maintained it through the desert. It turned out that the county officially owned it but did not maintain it; Scott has since convinced the county and forest to exchange ownership with the Santa Anita Canyon Road, then a county road. 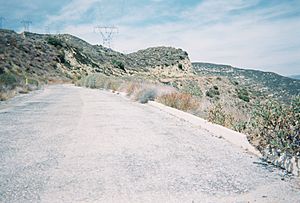 Stretch of original pavement and curb in 2007

The route was repaired in 2005 following heavy rainfall, but the road was not reopened as of early 2013[update], due to objections from Angeles National Forest officials.

All content from Kiddle encyclopedia articles (including the article images and facts) can be freely used under Attribution-ShareAlike license, unless stated otherwise. Cite this article:
Ridge Route Facts for Kids. Kiddle Encyclopedia.