Gorman is an unincorporated community in northwestern Los Angeles County. Tens of thousands of motorists travel through it daily on Interstate 5.

Gorman is a historic travel stop in Peace Valley, at the Tejon Pass which links Southern California with the San Joaquin Valley and Northern California. 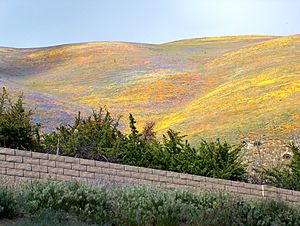 One of the Mountain Communities of the Tejon Pass, it is southeast of Frazier Park and south of Lebec. Interstate 5 runs through Gorman, and State Route 138 connects to the Interstate a few miles south.

California poppies, Lupines, and other wildflowers dramatically cover the hills in the springtime when there is sufficient rain.

The U.S. Census Bureau does not break out separate population figures for this small place, but in 2005 Gorman had only 15 homes and approximately a dozen registered voters. 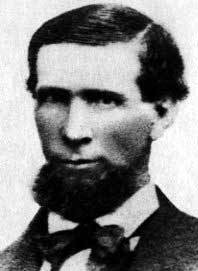 James Gorman Sr. gave his name to the rest stop in the Tejon Pass.

Gorman is “one of the oldest continuously used trail and roadside rest stops in California,” as the Native Americans of California “would have stopped there when it was the Tataviam village of Kulshra’jek ” explains Mountain Communities historian Bonnie Ketterl Kane.

The Spanish and Mexican colonial El Camino Viejo passed through the area en route to Old Tejon Pass. The route of the Stockton - Los Angeles Road went through Tejon Pass after 1852.

The first American settler in the area was a man named Charles Johnson after 1853. The 1853 account of Lt. Robert S. Williamson of the vicinity for the transcontinental railroad survey expedition report makes no mention of any habitations on the east side of the pass, only that a good wagon road (Stockton - Los Angeles Road) passed through it.

After Johnson's death his widow, Soledad Girado ran the place, which by 1855 became known as Rancho la Viuda (Widow's Station). Historian Frank F. Latta noted that the Johnsons' daughter, Isabel, was the only girl to study at the historic Escuela Normal of Los Angeles in the 1860s.

A man named Reed, took up residence next, calling it Reed's Ranch. In 1857 a woman was killed on his ranch when the great Fort Tejon earthquake struck the area and collapsed the roof of his adobe house.

Reed then built a substantial log house, that became Reed's Station on the Butterfield Overland Mail 1st Division Stations in 1858. It was a stop for the postal stagecoach. It was located 8 miles southeast of Fort Tejon, and 14 miles west of French John's Station.

The Butterfield Overland Mail ceased in 1861, but was replaced later by the Telegraph Stage Line, which stopped at most of the former stations, including at renamed Gorman's, where the horses were changed. Six of them were used for the pull up Tejon Pass from Bakersfield to Gorman's.

It was next bought by David W. Alexander, the sheriff of Los Angeles County, who sold the place to James Gorman Sr. in 1867 or 1868. The log "public house", which furnished food, lodgings, and liquor, soon became known as Gorman's Station. Gorman was a veteran of the Mexican-American War of 1848 and was at Fort Tejon as a civilian teamster and herder in 1854 while it was being built. In 1876, Gorman Sr. died after he was run over by his own supply wagon.

The first post office was established in December 1877 with Henry Gorman, probably James’ brother, as the postmaster. (The community today is served by a contract postal unit in the local market, but delivery is through the Lebec post office.) Gorman's widow, Johanna, continued to run the family farm and the roadside rest until she died in 1889.

In 1898, the ranch was bought by Oscar Ralphs, whose brother, George, had already begun a business in Los Angeles (in 1872) that eventually became the Ralphs supermarket chain.

In 1901, Oscar Ralphs married Mary McKenzie, who, as Mary Ralphs, later served 57 years on the Gorman School Board (from 1908 to 1965) and was honored for her service by Vice President Hubert Humphrey at a National School Boards Association convention.

The Ridge Route road through Gorman was paved in 1919. In 1923, the first gasoline station in California to be located away from a railroad track was established by Standard Oil. Gorman was a stop on the Ridge Route, and Highway 99 after 1926, where its Standard service station beckoned travelers. It was a rest stop for the Greyhound bus until 1977, and for long-distance truckers, who now use a Pilot Flying J station in Lebec.

“Being located on the busiest highway in California,” wrote historian Kane, “the people of Gorman knew well the need for an ambulance, as so many of the injured were brought to their homes. An ambulance service was established in 1932 with the purchase of an old Packard automobile that was converted into an emergency unit, equipped with one stretcher. The ambulance could be reached through the switchboard at the motel, and whoever was available would drive it.”

Aviator Charles Lindbergh established a camp in 1930 on the northeast side of the Gorman Hills, where he tested and flew a folded-wing glider called the Albatross.

Interstate 5 replaced U.S. Route 99 through Gorman and over Tejon Pass in 1964. 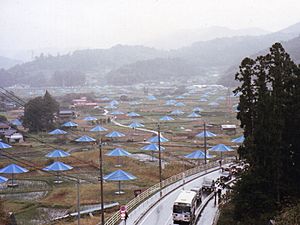 "The Umbrellas" by Christo and Jeanne-Claude (blue version in Japan).

"The Umbrellas," a site specific art installation by Christo and Jeanne-Claude, surrounded Gorman and Tejon Pass in late September and early October 1991. It was created with 1,760 large yellow umbrellas, placed from the roadsides to the mountainsides. A simultaneous installation of blue umbrellas was created in Japan.

Thousands of visitors flocked to Gorman from all over the world.

In January 2006, the Los Angeles County Board of Supervisors unanimously rejected a bid by 32 of the area’s 75 property owners to give up Gorman so it could be annexed to Kern County. Reasons cited for the proposal included red tape and zoning regulations restricting development in Los Angeles County. However, Los Angeles County and opponents of the proposal did not want to lose sales and occupancy-tax revenue the county collected annually from Gorman businesses.

Gorman Post Road, looking north, on the east side of Interstate 5.

Seventy-four thousand people pass through Gorman daily via the Interstate 5 freeway, but residents have a choice of local roads to avoid the freeway. Peace Valley Road parallels the freeway on the west, north of the town, for travel to Frazier Park and Lebec, and Gorman Post Road on the east, south of town, is a direct route to Highway 138.

Kern Regional Transit provides bus service Thursdays and Saturdays during the summer months from Gorman to Lebec, Frazier Park, Lake of the Woods, Pinon Pines, and Pine Mountain Club. It offers a dial-a-ride service all year. Connections can be made in Frazier Park or Lebec to a scheduled service to Grapevine and Bakersfield and further connection there to Greyhound and Amtrak.

All content from Kiddle encyclopedia articles (including the article images and facts) can be freely used under Attribution-ShareAlike license, unless stated otherwise. Cite this article:
Gorman, California Facts for Kids. Kiddle Encyclopedia.