Lake of the Woods, California facts for kids

Kids Encyclopedia Facts
This page is about the community. For the lake in El Dorado County, see Lake of the Woods (California).

Lake of the Woods is an unincorporated area and census-designated place (CDP) in southwestern Kern County, California.

The community is in Cuddy Canyon of the San Emigdio Mountains, along the Ventura and Kern County line. It is within the Los Padres National Forest.

The name Lake of the Woods was bestowed by pioneer Mrs. Florence Cuddy, when the community was established in 1925. The reservoir for which it was named has been dry since 1962, when its dam burst.

As of the census of 2000, there were 833 people, 346 households, and 217 families in Lake of the Woods, 88 percent of the residents being white — significantly higher than the population of the United States as a whole — which has a population about 75 percent white. There were no African-Americans included in the Lake of the Woods census. 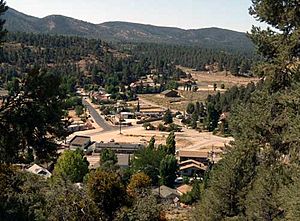 Western Lake of the Woods, with Lockwood Valley Road and Lakewood Drive in the center. The buildings at bottom front on Frasier Mountain Park Road. Click the image for a larger photo.

The population was somewhat older than the country as a whole, the median age being 39 years in Lake of the Woods and 35 years elsewhere. The community had a higher percentage of veterans: One hundred sixteen residents had served in the armed forces, or 20 percent, compared with 13 percent in the rest of the country. Thirty-eight percent of all residents, or 305 people, were disabled; that is higher than the 19 percent disabled population in the country at large.

In common with some of the other Mountain Communities of the Tejon Pass, Lake of the Woods had a significant vacancy rate when the census was taken in March 2000 — 129 of the 475 housing units were unoccupied, compared with just 9 percent in the nation at large. The vacancies may be attributed to some homes' being used only seasonally, or on the weekends.

Kern Regional Transit provides bus service to Lake of the Woods Thursdays and Saturdays during the summer to Frazier Park, Lebec, Pinon Pines, and Pine Mountain Club. It offers a dial-a-ride service all year. Connections can be made in Frazier Park or Lebec to a scheduled service to Grapevine and Bakersfield and further connection from the latter to Greyhound and Amtrak.

Road access from the east is provided by Frazier Mountain Park Road, which connects Lake of the Woods to Frazier Park, Lebec, and Interstate 5. Cuddy Valley Road heads west to Pinon Pines and Pine Mountain Club.

Lake of the Woods is served by the Frazier Park post office.

Cuddy Hall, owned by the local Lake of the Woods property owners association, is a community center that is available to the public. It was sold to the association in 1959 by Mrs. Cuddy for just $10. It is used as a polling place and is rented out for weddings, parties, concerts, and other events.

All content from Kiddle encyclopedia articles (including the article images and facts) can be freely used under Attribution-ShareAlike license, unless stated otherwise. Cite this article:
Lake of the Woods, California Facts for Kids. Kiddle Encyclopedia.