It is one of the Mountain Communities of the Tejon Pass

The community sits in a deep valley of the San Emigdio Mountains, on the San Andreas fault. It is surrounded by Los Padres National Forest, in an area where the rare and endangered California condor ranges.

The town lies between Apache Saddle and Pinon Pines Estates along Mil Potrero Highway. It is west of Frazier Park, Lebec, and Interstate 5. 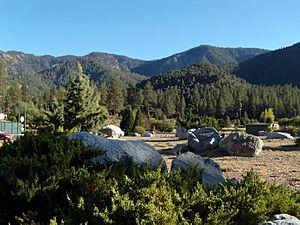 The 2000 census found that almost all the 1,600 residents (91 percent) were white. There were only nine blacks. There were 146 Hispanics or Latinos of any race. Other residents included 19 American Indians or Alaska natives and 12 Asians. 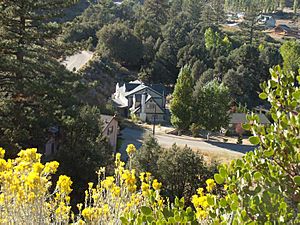 It was a relatively aged population, the median age being 45 years compared with 35 years for the nation as a whole.

PMC also had more veterans than its share — 263, or 21 percent, compared to 13 percent around the country.

In contrast with the country at large, where 64 percent of the people were working, Pine Mountain Club had just 56 percent employed. Those who were working had to travel about an hour to their jobs, compared to 25 minutes for most Americans.

Yet there were still 55 families (or 15 percent) below the poverty level in Pine Mountain Club in 2000. That is greater than the 12 percent for the country as a whole.

Pine Mountain Club is unusual in that almost two-thirds of its 1,737 housing units (61.5 percent) were vacant when the census was taken in March 2000. They were, in fact, second homes, vacation retreats, or spaces held for rental to seasonal tourists — especially during the peak winter months.

Owners lived in about eight of every 10 occupied units (84 percent), renters in the other two (16 percent).

Kern Regional Transit provides bus service Thursdays and Saturdays during the summer to Frazier Park, Gorman, Lake of the Woods, Lebec, and Pinon Pines. It offers a dial-a-ride service all year. Connections can be made in Frazier Park or Lebec to a scheduled service to Grapevine and Bakersfield and further connection there to Greyhound and Amtrak.

Pine Mountain Club is a private community that is managed by a property owners association.
Click the images to see larger versions of the photos.

All content from Kiddle encyclopedia articles (including the article images and facts) can be freely used under Attribution-ShareAlike license, unless stated otherwise. Cite this article:
Pine Mountain Club, California Facts for Kids. Kiddle Encyclopedia.