Hesperoyucca whipplei (syn. Yucca whipplei ), the chaparral yucca, our Lord's candle, Spanish bayonet, Quixote yucca or foothill yucca, is a species of flowering plant closely related to, and formerly usually included in, the genus Yucca. It is native to southern California, United States and Baja California, Mexico, where it occurs mainly in chaparral, coastal sage scrub, and oak woodland plant communities at altitudes of 0–2500 m. 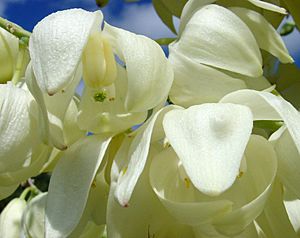 It produces a stemless cluster of long, rigid leaves which end in a sharp point. The leaves are 20–90 cm (rarely to 125 cm) long and 0.7–2 cm wide, and gray-green in color. The leaf edges are finely saw-toothed.

The single inflorescence grows extremely fast, and reaches 0.9–3 m tall, bearing hundreds of elliptical (bell shaped) white to purplish flowers 3 cm diameter on a densely branched panicle up to 70 cm broad, covering the upper half of the inflorescence. The fruit is a dry winged capsule, which splits open at maturity to release the seeds.

The plant takes several (usually 5+) years to reach maturity and flower, at which point it usually dies. Most subspecies produce offshoots from the base, so that although the parent plant flowers and dies, a cluster of clones around its base continue to grow and reproduce. It may also grow back from its base after much of its foliage has been scorched off by the wildfires that frequent its range.

The taxonomy of Hesperoyucca whipplei is complex and controversial. Hesperoyucca was described as a genus by Georg Engelmann as long ago as 1892, but it has taken recent DNA analysis to confirm that they are genetically distinct from Yucca. The splitting of Hesperoyucca from Yucca is still not widely reflected in available literature or online (for example, the British Royal Botanic Gardens, Kew and the Royal Horticultural Society websites do not recognise the name as current).

Among those botanists who have treated (or still treat) it as a species of Yucca, six subspecies have been recognised (Hochstätter 2000, 2002, 2004); others have regarded them as varieties. Yet others (e.g. Flora of North America and the Jepson Flora) do not recognise any subspecies or varieties (within either Yucca whipplei or Hesperoyucca whipplei ), as the wide variability within the species precludes the segregation of discrete subspecies.

The plant treated as the subspecies Yucca whipplei subsp. newberryi has been shown to be genetically distinct, and is often treated as a distinct species, Hesperoyucca newberryi. It is native further east, in Arizona, and differs in the capsules being unwinged or with only slight wings. 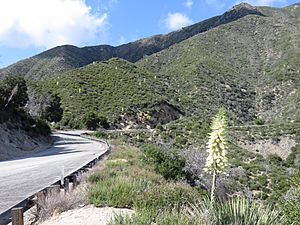 Several plants in flower in the San Gabriel Mountains

It is pollinated by the California yucca moth (Tegeticula maculata), a relationship which has become a classic example of symbiosis. The female yucca moth collects up to a dozen sacks of pollen grains called pollinia and forms them into a massive ball. She then flies to another plant and lands on the ovary of a flower. Standing with her head near the stigma, she inserts her ovipositor into the ovary wall and lays a single egg. She then rubs her pollen mass against the central stigmatic depression, ensuring pollination. The pollinated ovary will now produce many seeds, ensuring an ample food supply for the larva. Although many associations of Yucca and yucca moth exist, Tegeticula muculata and Hesperoyucca whipplei form an exclusive relationship.

Hesperoyucca whipplei is used in xeriscaping in Southern California, but reportedly is difficult to grow outside of its native range (although it is widely available from specialist nurseries in the United Kingdom). It is extremely drought tolerant and thrives in clay soils.

It has been used extensively by Native Americans. Yucca species such as the Yucca whipplei have been documented to have been used as a fiber and food source by Native Americans in the Southwest cultural region, prior to European settlement efforts. Archaeological evidence show that use of yucca species extends to approximately 5000 years ago within groups such as the Serrano of the San Bernardino Mountains and San Gabriel Mountains of the transverse mountain ranges of Southern California. The Serrano harvested the hearts of the plant during the spring growing season. Yucca whipplei grows on the rocky slopes and washes of the chaparral area of the transverse mountains of Southern California up to approximately 4000 feet above mean sea level. Harvested plants were chosen based on the growth of the stalk; the hearts were the preferred portion of the plant, and would be harvested before the stalk was fully developed. The heart contains the sugars stored to rapidly grow a stalk to flower, and become bitter as the stalk grows in height. The hearts would then be roasted in stone lined pits (earth oven) over several hours in a manner similar to that of agave species. Once cooked, the hearts would be removed and allowed to cool before eating. Uneaten portions could be dried for storage. Though slightly bitter, the stalk and flowers can be harvested and used as food sources as well. The stalks can be prepared roasted in a manner similar to the hearts, while the petals were often parboiled.

The long leaves of species such as the Yucca whipplei are made of strong fibers which can be pounded and scraped to expose long threads which run the length of the leaf. The leaves could be processed in many ways to remove the outer layer of leaf material which could be processed into threads and cords, used for basketry, blankets, and sandals. Green leaves can be heated over coals or directly on flames to heat the leaves. Cooking the leaves removes some of the saponins and allows for easier scraping. Ethnographic accounts dating to 1938 describes the preparation of leaves for fibers as any one of the following: boiling or pit roasting of live leaves to be scraped clean or the pounding or soaking of dry leaves expose fibers. Shells or stone scrapers were often employed to remove outer leaf material from the fibers. Once exposed, these fibers were often soaked in water to soften fiber. The fibers could then be twisted into cordage, used as materials in a basket, or woven into sandals.

Other groups made use of different varieties of yucca species found throughout the American Southwest. Archaeological evidence shows use of Yucca shidigera (Mojave yucca) near the area of the U.S.-Mexico border dating as early as 5000 years ago. Residues of yucca were found on some stone tools in a cave site in Texas indicate that yucca was used to secure stone tools to other materials. Ethnographic evidence of the Mogollon has shown the use of the leaves with green leaf matter intact and woven into sandals. The green leaves are fire heated and no scraping or further processing occurs to remove fibers, though the spine is removed from the tip. The whole green leaves are then tightly woven to shape the bed of the sandal, and secured to the foot with cordage ties.

All content from Kiddle encyclopedia articles (including the article images and facts) can be freely used under Attribution-ShareAlike license, unless stated otherwise. Cite this article:
Hesperoyucca whipplei Facts for Kids. Kiddle Encyclopedia.