Lucerne Valley is a census-designated place and valley landform located in the southern Mojave Desert, within western San Bernardino County, California. On September 24–25, 2016, The Grand Tour on Amazon Prime shot an episode at Rabbit Dry Lake outside of Lucerne Valley town limits. 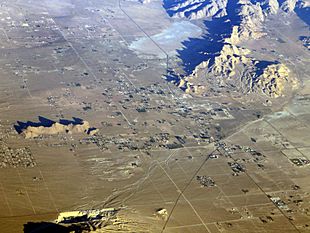 The geographic valley is defined by the surrounding Granite Mountains, Ord Mountains, and San Bernardino Mountains.

The transportation nexus of Lucerne Valley is located where State Route 247 and State Route 18 are connected by Old Woman Springs and Barstow Roads, the two highways do not have a direct junction.

In San Bernardino County, Lucerne Valley's area is also identified as County Service Area 29. While Lucerne Valley's "town limit" signs are within 2 miles of each other, the County Service Area Limits are much larger: in the west to Joshua Road (unpaved road east of Milpas Rd. on Hwy. 18), to the north at the 4,000 feet (1,200 m) height of Ord Mountain on Highway 247, to the south at the entrance to Cushenbury Canyon on Highway 18, and at Old Woman Springs Ranch as the eastern boundary. On June 11, 2013, Lucerne Valley and Johnson Valley were merged under the same Municipal Advisory Council, which serves as an advisory reporting agency to the County of San Bernardino District Supervisor concerning the region. On August 14, 2013, Johnson Valley was sworn in to the same Municipal Advisory Council as Lucerne Valley. CSA 29's borders, however, remain unchanged from the move.

According to the Köppen Climate Classification system, Lucerne Valley has a semi-arid climate, abbreviated "BSk" on climate maps.

According to the 2010 United States Census, Lucerne Valley had a median household income of $30,142, with 18.4% of the population living below the federal poverty line.

Industrial zoning is predominantly in the southern border of the community on the north-facing slopes of the San Bernardino Mountains.

The commercial zoning corridor is primarily on State Route 18, with outlying businesses within a mile of the eastern half of the Old Woman Springs/Barstow Road junction. Commercial development is focused on mixed-use development, with storefronts facing the highway and a private residence on the same property behind the business on the same lot. Traditional retail construction has been restrained in the latter half of the 20th Century to keep the rural character of the town intact, but in September 2015 a Dollar General store opened as the first franchise grocery retail to enter town limits.

All residential zones are classified as Rural, Single or Medium density. Most housing developments are tract-based and were completed prior to the 1990s. No further tract-based construction projects have occurred in 20 years, with most new construction done individually on privately owned lots. An attempt to construct a golf course and install utilities for residential/commercial zones called "Rancho Lucerne" began grading north of the High School site before embezzlement charges filed against the financier caused the project to shut down in 2001, leaving the site abandoned and desert habitat destroyed.

Utilities development projects have met with mixed reactions from residents and state/county officials, including solar power plants and wind turbine plants, and water well drilling and export proposals. They all would transport local resources for statewide use: such as power added to state grid through CalISO; or as water rights for power projects cooling purposes or for direct use by the Los Angeles Department of Water and Power (LADWP) to the Los Angeles metropolitan area. In 2012, LADWP cancelled an attempt to install a 2 mile wide water and power corridor in the southern half of the town. 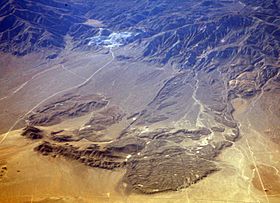 Aerial view of the Blackhawk Landslide.

Parks in the Lucerne Valley include:

All content from Kiddle encyclopedia articles (including the article images and facts) can be freely used under Attribution-ShareAlike license, unless stated otherwise. Cite this article:
Lucerne Valley, California Facts for Kids. Kiddle Encyclopedia.