Thousand Oaks is a city in southeastern Ventura County, California, United States. It is in the northwestern part of the Greater Los Angeles Area, approximately 35 miles (56 km) from Downtown Los Angeles and is less than 15 mi (24 km) from the Los Angeles city neighborhood of Woodland Hills. It was named after the many oak trees that grow in the area, and the city seal is adorned with an oak.

The city forms the populated core of the Conejo Valley, which includes Thousand Oaks proper, Newbury Park, Westlake Village, Agoura Hills, and Oak Park. The Los Angeles County–Ventura County line crosses at the city's eastern border with Westlake Village. The population was estimated to be 129,339 in 2015, up from 126,683 at the 2010 census.

Thousand Oaks and Newbury Park were part of a master-planned city, created by the Janss Investment Company in the mid-1950s. It included about 1,000 custom home lots, 2,000 single-family residences, a regional shopping center, a 200-acre (0.81 km2) industrial park and several neighborhood shopping centers. The median home price is around $669,500. Thousand Oaks was ranked the fourth-safest among cities with a population greater than 100,000 in the United States by the FBI's 2013 Uniform Crime Reports. 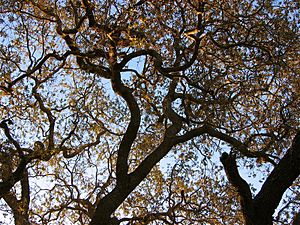 The area was once occupied by the Chumash people, and 2000-year-old cave drawings may still be seen at the Chumash Indian Museum, 3290 Lang Ranch Parkway, in the Lang Ranch section of the city. The Chumash village was known as Sap'wi, which means "House of the Deer".

The area's recorded history dates to 1542 when Spanish explorer Juan Rodriguez Cabrillo landed at Point Mugu and claimed the land for Spain. It eventually became part of the 48,671 acres (196.96 km2) Rancho El Conejo land grant by the Spanish government, thus becoming the basis of the name Conejo Valley (conejo means "rabbit" in Spanish, and there are many in the area). It served as grazing land for vaqueros for the next fifty years.

In the late 19th century it was on the stagecoach route between Los Angeles and Santa Barbara. The Stagecoach Inn was built in 1876, and is now a California Historical Landmark and a popular museum.

The Janss family, developers of Southern California subdivisions, purchased 10,000 acres (40 km2) in the early 20th century. They eventually created plans for a "total community" and the name remains prominently featured in the city.

Jungleland USA was one of Southern California's first theme parks. Wild animal shows entertained thousands in the 1940s and 1950s. Many television and movie productions used the park's trained animals and were filmed there, including Birth of a Nation, Tarzan, and The Adventures of Robin Hood. Jungleland closed in May 1968, in part due to competition from other amusement parks such as Knott's Berry Farm and Disneyland. The Thousand Oaks Civic Arts Center today stands on the site of the park.

The City of Thousand Oaks was incorporated on October 7, 1964, the first incorporated city in the Conejo Valley. Some sources mistakenly state that Thousand Oaks was incorporated on September 29, 1964, which was the date that voters approved the incorporation and selected the name. However, the incorporation only became official once the certificates of election were filed with the California Secretary of State, and then the record of affidavit was filed with the Ventura County Clerk. It is known for being a planned community, as the city is one of few that have actually stayed with the master plan. Increased development in Moorpark and Simi Valley in the late 1990s and early 2000s caused the Moorpark Freeway (Highway 23) to become heavily congested during both morning and afternoon rush hours. A major widening project began in 2008 to alleviate most of this congestion. Because of its desirable environment and location, property values appreciated more than 250% in less than ten years, primarily during the mid-1990s to early 2000s.

Newbury Park is located in the westernmost part of the city. This unincorporated area was annexed by the city of Thousand Oaks through votes by Newbury Park communities. The only communities that chose to remain county areas are Casa Conejo, which was built from 1960 to about 1965, and Lynn Ranch, an old neighborhood in the western portion of the city. Thousand Oaks also annexed the parts of neighboring Westlake Village (then simply known as "Westlake") that were located in Ventura County, in two portions in 1968 and 1972.

Thousand Oaks is encouraging mixed-use retail and housing development along the downtown portion of Thousand Oaks Boulevard. The city is "built-out" within the confines of the Conejo Valley and has adopted a smart growth strategy as there is no room for the sprawling suburban growth the city is known for.

Although Thousand Oaks has a downtown area (focused around the Janss Marketplace mall, The Oaks mall, and W. Thousand Oaks Blvd.), a large portion of the city's inhabitants live in suburban communities a distance from the commercial centers of the city. The large housing districts near Lynn Road to the north and west are an example of this sprawl, despite attempts by Ventura County planners to reduce it.

The region has a hot-summer Mediterranean climate (Csa in the Koeppen climate classification) or dry-summer subtropical zone climate, with hot, sunny, dry summers and mild winters with moderate rainfall. Vegetation is typical of Mediterranean environments, with chaparral and grasses on the hillsides and numerous western valley oaks. Its elevation ranges from about 500 to 900 feet (excluding the mountains and hills). The area has slightly cooler temperatures than the surrounding areas, as it receives cooler air from the ocean through various hill and mountain passes. On March 10 and 11, 2006, snow fell on the peak of Boney Mountain, the first snow to fall in the area in about 20 years. Snow also fell on Boney Peak on December 17 and 18, 2008. 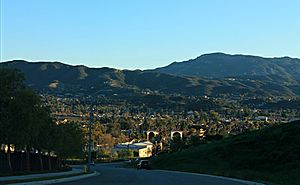 A road in the Newbury Park area of Thousand Oaks 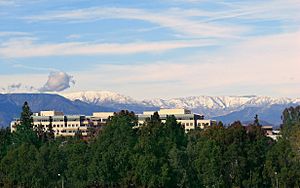 A view of the Topa Topa Mountains and Amgen 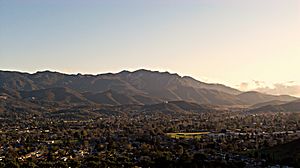 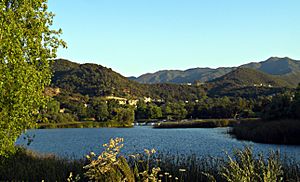 Thousand Oaks lies in the heart of the Conejo Valley, with the city of Los Angeles to the east and the city of Ventura to the west. The city is served by U.S. Route 101 (Ventura Freeway), as well as State Route 23. Highway 101 runs through the city and connects it with Los Angeles and Ventura. CA Route 23 connects to the 101 near downtown Thousand Oaks, runs north toward Moorpark and Simi Valley, and essentially divides the city in two. Thousand Oaks is also served by Thousand Oaks Transit (TOT), which provides public transportation in the form of shuttles and buses. TOT buses provide service to Thousand Oaks as well as some neighboring communities.

A regional transportation center provides bus and shuttle lines to Los Angeles, Oxnard, Ventura, Moorpark, Simi Valley, and Santa Barbara via the VISTA, Metro, and LADOT Commuter Express bus lines. In addition to being a transfer station from Los Angeles and other nearby cities, it also serves as the primary station for Thousand Oaks Transit buses. Metrolink Ventura County and Pacific Surfliner services are available at the train stations in Moorpark and Camarillo. The Amtrak Coast Starlight stops at the Oxnard Transit Center and the Simi Valley Amtrak/Metrolink Station.

Commercial air travel is provided primarily by Los Angeles International Airport for regular commuters, while the Bob Hope Airport (in Burbank) offers an alternative for domestic destinations. Thousand Oaks offers public transportation that runs to both airports, via the VISTA, Metro, and LADOT bus lines. Los Angeles International Airport is approximately 40 miles (64 km) southeast of the city, while Burbank Airport is approximately 35 miles (56 km) east of the city. General aviation airports include Camarillo Airport, approximately 15 miles (24 km) west of the city; Oxnard Airport, approximately 25 miles (40 km) west of the city in Oxnard, California; and Van Nuys Airport, 25 miles (40 km) east of the city. The now-closed Conejo Valley Airport operated in Thousand Oaks from 1926 until 1962 with a 2,600-foot (792-metre) airstrip. When the route of the new 101 Freeway intersected a part of the original airfield it was closed. It served general aviation, and featured an aerial sightseeing service. On May 5, 1960, Rancho Conejo Airport was opened as a replacement, northwest of Conejo Valley Airport. The new facility was considered an 'executive airport', with a paved and lighted4,500-foot (1,372-metre) runway. A flying school, restaurant and air charter service operated there for several years. This airport appeared in It's A Mad, Mad, Mad, Mad World in 1963; some Three Stooges episodes were filmed there. Rancho Conejo Airport closed in 1966.

Currently, Thousand Oaks is undergoing numerous renovations and development. U.S. Route 101 is being upgraded, The Oaks Shopping Center is being expanded by the Macerich Company, and the city has plans to renovate the old downtown, near the Civic Arts Plaza on Thousand Oaks Blvd.

New homes are also being built in very few areas of the city. Primary areas of new residential construction are currently in-fill sites within the developed area of the community and not outward expansion. 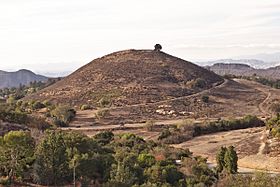 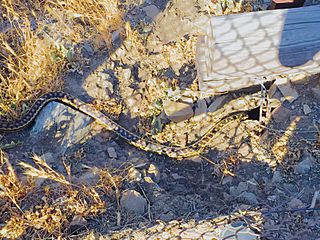 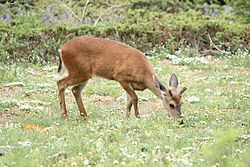 Mule deer are among the most common mammals in Thousand Oaks.

There have been observed a total of 171 bird species within the city limits. The most commonly encountered avifauna include the house sparrow, house finch, Brewer's blackbird, California towhee, eastern towhee, oak titmouse, acorn woodpecker, and California quail. Raptor population densities in the Conejo Valley, which therefore has some of the highest quantities of raptors in the U.S. Some of the raptors found in the City of Thousand Oaks include the golden eagle, red-tailed hawk, Cooper's hawk, marsh hawk, sharp-shinned hawk, red-shouldered hawk, ferruginous hawk, pigeon hawk, prairie falcon, turkey vulture, barn owl, great horned owl, screech owl, American kestrel, and the white-tailed kite.

All content from Kiddle encyclopedia articles (including the article images and facts) can be freely used under Attribution-ShareAlike license, unless stated otherwise. Cite this article:
Thousand Oaks, California Facts for Kids. Kiddle Encyclopedia.