The California kingsnake (Lampropeltis californiae) is a nonvenomous colubrid snake endemic to the western United States and northern Mexico, and is found in a variety of habitats. Due to ease of care and a wide range of color variations, the California kingsnake is one of the most popular snakes in captivity. The California Kingsnake's length is, on average, two feet, however, they have (though rarely) exceeded three and a half feet. Their colors may vary, but they are usually found with brown/black and white/tan stripes.

The California kingsnake is widespread along the West Coast of North America to elevations of approximately 6,100 ft (1,900 m) in the Tehachapi Mountains and to over 7,000 ft (2,100 m) in the southeastern Sierra Nevada Mountains. This species lives in a wide variety of habitats, including woodland chaparral, grassland, deserts, marshes, and even suburban areas. These snakes live in Oregon, California, Nevada, Utah, Arizona, southwestern Colorado, northwestern New Mexico, and northwestern Mexico. In Arizona, they intergrade with the desert kingsnake (Lampropeltis splendida) and the Mexican black kingsnake (Lampropeltis getula nigrita). The species has also become invasive on the Spanish island of Gran Canaria.

The California kingsnake is primarily diurnal, but may become increasingly nocturnal during periods of particularly hot weather. In the winter, they retreat underground and enter a hibernation-like state called brumation. When disturbed, California kingsnakes will often coil their bodies to hide their heads, hiss, and rattle their tails, which can produce a sound somewhat resembling that of a rattlesnake. When they are nervous they tend to twitch their tails. They are considered harmless to humans, but if handled it is common for this species to bite, as well as excrete musk and fecal contents from their cloaca.

The California Kingsnake, like all snakes, has a special way of "smelling". Instead of using nostrils, snakes have developed a forked tongue and a Jacobson's organ. The Jacobson's organ allows the California Kingsnake to analyze what is around it through scent particles. The snake's forked tongue will grab onto the scent particles and place those particles onto the top of the buccal cavity, or mouth, where the Jacobson's organ opens. This process helps with the snake's tropotaxis, which may allow the snake to become better at hunting down their prey. That said, California kingsnakes are opportunistic feeders and common food items include rodents, birds, other reptiles and amphibians. All kingsnakes are non-venomous, but are powerful constrictors and generally kill their prey through suffocation. The "king" in their name refers to their propensity to hunt and eat other snakes, including venomous rattlesnakes, that are commonly indigenous to their natural habitat. California kingsnakes are naturally resistant to the venom of rattlesnakes, but are not totally immune. It has been recorded that kingsnakes are known to swallow their own shed skin.

As was discovered in studies of kingsnake muscle power, California kingsnakes seem to have the strongest squeeze proportionate to body size of any snakes, like larger snakes such as the Burmese python, green anaconda, reticulated python and twice that of a similarly sized rat snake or python. This adaptation may have evolved in response to the snake's diet of reptilian prey, which needs less oxygen to survive an attack by constriction than mammals do.

The California kingsnake is an oviparous internal fertilization animal, meaning it lays eggs, as opposed to giving live birth like some other snakes. Courtship for this kingsnake begins in the spring usually sometime after their hibernation or first shedding and involves the males competing for available females. In order to assert dominance when fighting another male, the California Kingsnake will get onto the other male and proceed biting the other snake. Their mating ritual begins by the male snake vibrating uncontrollably. Eggs are laid between May and August, which is generally 42–63 days after mating; in preparation the female will have chosen a suitable location. The typical clutch size is five to 12 eggs with an average of nine, though clutches of 20 or more eggs are known. The hatchlings usually emerge another 40–65 days later and are approximately eight to 13 inches in length. Adult California kingsnakes are most commonly 2.5–3.5 feet in length, and rarely exceed four feet. 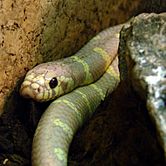 A captive-bred Lavender morph of the California kingsnake

The California kingsnake is one of the most popular pet reptiles due to its ease of care, attractive appearance and docile demeanor. Due to natural color and pattern variability between individual snakes, snake enthusiasts have selectively bred for a variety of color patterns and morphs. Dozens of color variations are sold in the pet trade. Wildtype California kingsnakes are technically illegal to sell without special permits in their home state of California. These increased restrictions are due to a law that prohibits trafficking native California species within state lines. As captive-bred morphs are generally exempt from these rules, the law is loosely enforced. This snake's status is currently of least concern. However, with its popularity as a pet, it has faced troubles in the past.

All content from Kiddle encyclopedia articles (including the article images and facts) can be freely used under Attribution-ShareAlike license, unless stated otherwise. Cite this article:
California kingsnake Facts for Kids. Kiddle Encyclopedia.