The Mexican black kingsnake (Lampropeltis getula nigrita) is part of the larger colubrid family of snakes, and a subspecies of the common kingsnake, which is debated by herpetologists to contain as many as 10 unique varieties. This species occupy rocky areas and places lush with vegetation in various regions of the Sonoran Desert, Northwestern Sinaloa, Mexico, and small parts of Arizona. In captivity, they can remain in excellent health through a strict diet of mice and generally require a temperature gradient between 21 and 29 degrees Celsius.

Like all kingsnakes, the Mexican black kingsnake is a constrictor, using its powerful body to envelop and asphyxiate its prey, and therefore lacks venom. Their diet does include other snakes (ophiophagy) — particularly rattlesnakes which are also common to the region—and as result, has developed a resilience to various kinds of venom. 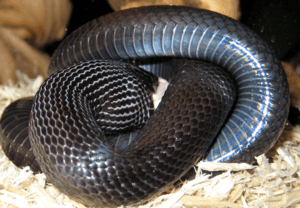 Illustrating the high gloss shimmer of the snake's ventral scales.

They are opportunistic hunters that will frequent the burrows of rodents and other small creatures, looking for their next meal. While they are a terrestrial species, they have been known to climb low vegetation and are also excellent swimmers.

Younglings sometimes carry small spots of white or yellow, particularly under their chin; however, those markings commonly either fade or disappear entirely as they mature. A full grown adult will usually have no discernible rings or other markings of any kind. It is, however, a common misconception that this subspecies of kingsnake is black in color. In actuality, they are of a deep, dark, chocolate—something that is highly visible under direct light.

The enamel of their scales reflects a "blueish" shimmer (pictured left), a trait made prominent on their ventral scales (likely due to their size, shape, and smoothness), and has been likened to that of the inside of an oyster shell. While this characteristic is found in many colubrids, it is exceptionally apparent on this particular species due to the rich, dark color of its scales. Lampropeltis means "shiny shield" (from Greek λαμπρος, "shine" + πελτα, "shield").

The Mexican black kingsnake is considered a popular pet (especially for novice collectors) because it is quite easy to care for, generally well natured and has no reservations feeding on either live or "pre-killed" rodents. They are active during the day and at night (diurnal); however, they tend to hunt during the daytime, as they rely on their (albeit limited) vision for predation. While their eyes do have severely limited acuity, their ability to detect movement is quite acute.

While they prefer to spend a large portion of their time in isolation and are quite solitary by nature, they do require exercise and activity to promote health and wellbeing. If provoked or threatened, they will rattle their tail, beating it against the ground. This type of behaviour has been made famous by the common rattlesnake, and while kingsnakes do not possess rattles, they do, however, exhibit the same behaviour. This act is quite common among all the colubrids (such as corn snakes and milk snakes) and is a sign they should be left alone. While some have been known to strike their owners if continued to be agitated during this state, this is rare among the species.

The Mexican black kingsnake regularly feeds on other snakes in the wild, such as rattlesnakes (whose venom has little to no effect on them), so it is advisable that they be housed alone.

In captivity, they can remain in excellent health through "an all rodent diet" (e.g., mice, rats) and are opportunistic feeders. Many owners prefer to feed their snakes pre-killed rodents as they are generally more convenient to store, and will not pose any danger to the reptile (mice and rats will bite and scratch in an effort to defend themselves). Some owners have been reported to feed their snakes in separate enclosures ("feeding bins") to decrease aggression. Most local pet stores that sell reptiles, will also typically carry frozen mice at various stages of development.

Because snakes digest nearly all of their prey, they do not require additional sources of vitamins or minerals. Moreover, at this time, there exist no data to suggest otherwise. 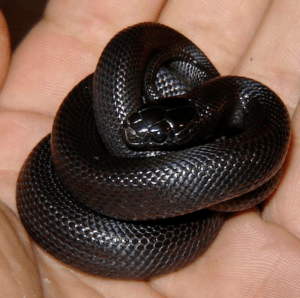 A juvenile, only a few months old.

In the wild, most colubrids will reduce their activities in the winter months; however, in captivity, they can remain active year-round (unless brumation is induced). It is of note that studies conducted have shown that snakes, if given the choice, prefer brumation to remaining active. However, some speculate that this preference is not indicative of higher order planning, but rather a predisposition directly influenced by their genetics (instinctual). Because of their origin, the Mexican black kingsnake does not tend to brumate, but has been known to do so under certain conditions in captivity.

This species generally requires a temperature gradient between 21–29 degrees Celsius (21–24 degrees during nighttime, and 26–29 degrees during the daytime), which can be provided through a heat lamp and an under-tank heater. Fresh water should be provided daily and faecal matter should be promptly removed to avoid bacterial infections. Heating rocks are not recommended, as in captivity, a snake will neglect to move from extremely hot surfaces, thus leading to either minor or severe burns. There exists no data whether this type of behaviour occurs in the wild or is restricted to captive settings. Any heated surface must always be tested before the reptile is exposed to it. The purchase of a thermometer and hygrometer are highly encouraged.

Humidity should be kept between the range of 40 to 60 percent. Failure to provide suitable levels can result in pulmonary infections or death.

Aspen is the most widely used substrate for this species. Pine and cedar are considered toxic; however, other alternatives to aspen exist (such as sand or various kinds of dirt). As with any pet, it is highly advisable that any substrate or ornamental additions (wood, plants, etc.) placed into the animal's enclosure be checked for potential toxicity, bacteria, and infestations. It is highly recommended housing be cleaned monthly to ensure proper sanitation. Substrate should also be completely replaced during this time.

There currently does not exist sufficient data on whether these reptiles require UVB radiation, and care sheets state they can remain in good health through the sole use of UVA light bulbs. However, they must be provided with adequate daytime and nighttime light cycles. Failure to do so can result in shock, the contraction of various ailments, or may even lead to death.

In the wild, most kingsnakes are moderately sized, reaching an average length of 90-120 Centimeters (3–4 feet), and tend to be plump and stocky in girth. However, in captivity, some kingsnakes can exceed 1,5 Meters (5 feet). This is most likely attributed to the larger and more stable diet they receive in captivity, compared to what they might receive in the wild. These snakes can weigh up to 1,3 kg (3lbs). as they reach adulthood (dependent on their size), and can live anywhere between 20 and 30 years.

Kingsnakes (as many other species) are susceptible to various kinds of infections and infestations. Most common are necrotizing dermatitis (or "scale rot"), stomatitis (or "mouth rot"), pneumonia (or other respiratory infections), and ectoparasites (or "snake mites"). Many of these conditions are a result of improper husbandry leading to unsanitary conditions or inadequate heat, light, or humidity. Many of these problems can be avoided by supplying adequate heat (ensuring ample room for the reptile to thermoregulate), light, clean water, and a sanitary environment through the immediate removal of faecal matter.

All content from Kiddle encyclopedia articles (including the article images and facts) can be freely used under Attribution-ShareAlike license, unless stated otherwise. Cite this article:
Mexican black kingsnake Facts for Kids. Kiddle Encyclopedia.