The Stagecoach Inn in Newbury Park, California, originally known as the Grand Union Hotel, was used as a resting area for people who traveled from Los Angeles to Santa Barbara. Besides a hotel and stagecoach stop, it has also been used as a post office, church, restaurant and military school. It is California Historical Landmark no. 659 and is listed in the National Register of Historic Places. It played a major role in the development of the stage line transportation network in California. The hotel was also the first business venture in the Conejo Valley.

Today, the inn is owned by the Conejo Recreation and Park Department and operated as a historic museum. The museum includes a replica of Timber School (originally built in 1889), a carriage house and blacksmith shop, nature trail, and the 'Tri-Village', a small group of three houses: the pioneer house, the adobe, and the Chumash 'ap. There is also a gift shop located inside the museum. Volunteers operate the museum, although it is run by the Conejo Valley Historical Society. There is also a Jr. Docent program for children and teenagers aged 8–18. It is a dominant cultural- and educational gathering place for thousands of residents and visitors to Newbury Park.

The Stagecoach Inn is allegedly haunted, and is considered one of California's most famous haunted places.

The Stagecoach Inn is open Wednesday through Sunday, from 1-4 pm., in Newbury Park, CA.

The Stagecoach Inn has had a variety of names and owners: 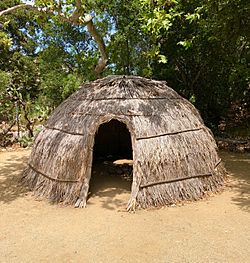 Replica of a Chumash 'ap at the Tri-Village Complex.

James Hammell was a carpenter in Santa Barbara who planned to construct a hotel along the stagecoach route from Los Angeles to Santa Barbara. After talking to John Edwards about his plans in the late 19th century, Hammell purchased 900 acres of land from Edwards. Near what is now Highway 101 and Ventu Park Road is where Hammell first began constructing the hotel. El Grande Hotel (Grand Union Hotel) was constructed in 1876 and was originally planned as a stopover for travelers between Los Angeles and Santa Barbara. It was constructed using redwood from Northern California. When it arrived in Port Hueneme, it was freighted up the Conejo Grade when brought to Stagecoach Inn. 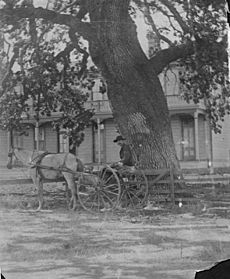 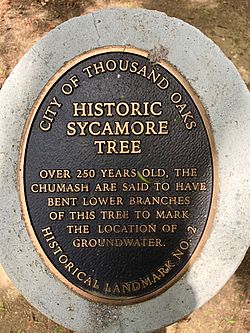 The "Historic Sycamore Tree" is a 300-year-old tree which is a designated county- and city landmark.

It was originally constructed in 1876 near what is now the Ventura Freeway and Ventu Park Road. Its redwood lumber came by sea and was freighted up the steep Conejo Grade (between Newbury Park and Camarillo) by multiteam wagons. One month before the hotel's grand opening, the Coast Line Stage Company changed its routes from Conejo Valley to Santa Clara Valley, which meant an end to Hammell's prospects of a mainline stage stop. Hammell did not cancel his plans, but instead opened the hotel on July 4, 1876, and publicized it as a "health- and pleasure resort". A countywide newspaper reported: "Shooting, fishing, bathing, and a first-rate table are among the good things on hand for visitors."

Following the drought of 1877-78 James Hammell no longer owned the hotel. After passing through several owners, it was purchased in 1885 by Cecil Haigh, an Englishman. H. Allen Hays, grandson of Cecil Haigh, gave the building and about four acres of land at the present location to the CVHS, who later deeded the property to the Conejo Recreation and Park District in return for a 50-year renewable lease to operate the facilities for cultural and educational purposes. In the 1960s, the hotel was threatened with demolition by the expansion of the Ventura Freeway, but it was granted Historical Landmark status and moved to its present location in 1965. On April 25, 1970, a fire entirely destroyed the museum and its contents. Although the reconstructed museum was dedicated and opened on July 4, 1976, the second floor was not completed until 1980. The structure was rebuilt using the original Monterey style architecture.

Also on the museum grounds is the Timber School, a replica of the 1889 school. On July 13, 2004, the Thousand Oaks City Council voted unanimously to declare the Timber School on Newbury Road City Landmark No. 12.

On the museum grounds, near the Tri-Village Complex, is a historic 250+ year old sycamore tree. The tree was designated Ventura County Landmark No. 44 on May 1, 1978, due to its "great age, size, and formation." The tree is also designated Thousand Oaks City Landmark No. 2. The tree has served as a polling place, resting place, post office, and outdoor chapel. Furthermore, General John C. Frémont passed by this tree in 1846 on his way to sign a treaty with General Andrés Pico to secure California's annexation to the U.S. The Chumash Indians are said to have bent the lower branches to mark the location of underground water. 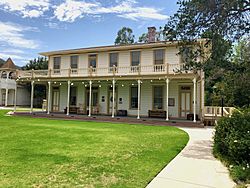 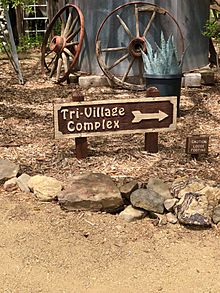 The hotel is home to permanent exhibits such as the Carriage House and Blacksmith Shop, Anderson Exhibit Hall, Tri-Village and The Timber School. It is home to the Tri-Village which represents three historic eras in the Conejo Valley: the Newbury Pioneer House, a Spanish Adobe, and a reconstructed Chumash village. The exhibits are changing routinely. Temporary exhibits as of July 2018 include an exhibit dedicated to Jungleland USA, an exhibit of vintage dresses, and mammoth bones through the exhibit "Fossils of the Conejo Valley."

The premises are also home to a botanical garden, The Heritage Rose Garden, which contains over 35 species of heirloom roses dating from 1752. A memorial brick path winds through the gardens. 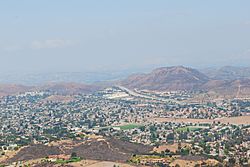 View from Angel Vista, a peak reached from the Rosewood Trail.

Stagecoach Inn Park sits adjacent to the Stagecoach Inn, located at the corner of Lynn- and Ventu Park Roads. The 4.9 acre park was acquired by the Conejo Recreation & Park District in 1968, and later developed into a neighborhood park in 1985. A creek runs through the park on one edge, and the premises houses a 425-year old Sycamore tree. The park has a playground, public restrooms, picnic tables, barbecue grills, and an outdoor basketball court.

The Rosewood Trail to the 1,603 ft. peak Angel Vista in the Santa Monica Mountains can be reached from the park. Hikers may park at the park and access the Rosewood Trail from its trailhead immediately across Lynn Road from the Stagecoach Inn Park.

The Conejo Valley Historical Society was established on October 9, 1964, as an effort to save the Stagecoach Inn from potential demolition due to expansion of the Ventura Freeway. Its members were able to save the structure and was also successful in having it declared California State Landmark No. 659. Allen Hays, the grandson of Cecil and Cicelie Haigh, donated the Stagecoach Inn and four adjacent acres of land to the Conejo Valley Historical Society. The society deeded the site to the Conejo Recreation and Park District (CRPD) in return for a renewable lease to operate and manage stagecoach for cultural- and educational purposes. The society helped prepare it as a museum after the 1965 move, and the society made immediate plans for rebuilding the structure after the April 1970 fire.

All content from Kiddle encyclopedia articles (including the article images and facts) can be freely used under Attribution-ShareAlike license, unless stated otherwise. Cite this article:
Stagecoach Inn (California) Facts for Kids. Kiddle Encyclopedia.