Kids Encyclopedia Facts
For the port itself, see Port of Hueneme. 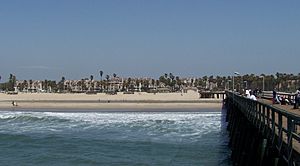 Port Hueneme ( wy-NEEM-ee) is a small beach city in Ventura County, California surrounded by the city of Oxnard and the Santa Barbara Channel. The name derives from the Chumash Native language spelling of the Chumash wene me, meaning "Resting Place". Juan Rodríguez Cabrillo explored this area and the adjacent Channel Islands in October 1542. The town's name was officially changed to Port Hueneme in 1939 and was incorporated March 24, 1948.

Thomas Bard learned of the submarine canyon at Point Hueneme and took advantage of the canyon depth to construct the Hueneme Wharf in 1871 here. The existing street grid of the town was formally laid out in 1888. Until the construction of the Montalvo Cutoff that brought the railroad to nearby Oxnard, the wharf was the principal means of transportation for that portion of Ventura County lying south of the Santa Clara River. Hueneme was the second largest grain shipping port on the Pacific coast between 1871 and 1895. Both the Port of Hueneme and Naval Base Ventura County lie within city limits.

Port Hueneme has a south-facing sand beach, known for its surfing. The beach has a wooden fishing pier and is about a mile long between Ormond Beach downcoast and Point Hueneme Light at the harbor entrance shared by the naval base and the port. The Waterfront Promenade, also known as the Lighthouse Promenade, provides a paved public access along the shoreline with two historic sites at view points: the 1872 Wharf and the Oxnard Packing House. There are also picnic tables and barbecue grills.

Port Hueneme was also used as a filming location for the movie Back To The Future: Part 3, as the rail road crossing scene depicting Marty arriving home was filmed on 270 S. Ventura Road.

There were 7,268 households out of which 37.4% had children under the age of 18 living with them, 49.9% were married couples living together, 13.5% had a female householder with no husband present, and 31.2% were non-families. Twenty-four point one percent of all households were made up of individuals and 10.3% had someone living alone who was 65 years of age or older. The average household size was 2.86 and the average family size was 3.42.

The Port of Hueneme, shared with Oxnard Harbor District and Naval Base Ventura County, is the only deep water port between the Port of Los Angeles and the Port of San Francisco, and the only Navy controlled harbor between San Diego Bay and Puget Sound in Washington state.

The harbor is a shipping and receiving point for a wide variety of goods destined for the Los Angeles Basin and beyond, including automobiles, pineapples, and bananas. Agricultural products such as onions, strawberries, and flowers are shipped.

According to abc 7 news, the Port in Port Hueneme beach has been eroding for 60 years since it was built as a commercial port with jetties that block the natural flow of sand. After the navy confiscated the port during WW II, the government has the responsibility to put back the sand that has disappeared. They have been lacking in their funds until 2013 when announced that nearly $12 million in funding will be available to replenish the sand at the beach, money coming from branches of the government. Furthermore, it’s an everlasting expensive routine in stopping that ocean water from sitting on the streets. 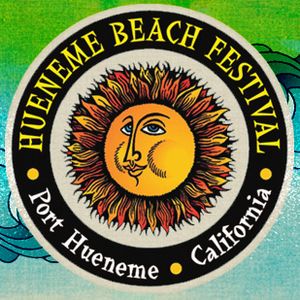 Prior to the "Hueneme Beach Festival", the HHD Board of Directors ran the 'Port Hueneme Harbor Days Festival & Parade' with food, bands, entertainment, kids attractions, vendor booths, and activities, such as kite-flying contests, sand sculpture contests, metal detection contests, and a long time ago, bathing suit contests. HHB was started in 1950 and ended in 2001, after 51 years of successful operations. The demise came from a lack of city support, and financial troubles such as an increases in fees for insurance, and food handling regulations. There are pictures of the early Hueneme Harbor Days Festival at the local history museum.

The business district is on Channel Islands Boulevard on the north side of the city separated from the original downtown by the Naval base.

This region experiences warm (but not hot) and dry summers, with no average monthly temperatures above 71.6 °F. According to the Köppen Climate Classification system, Port Hueneme has a warm-summer Mediterranean climate, abbreviated "Csb" on climate maps.

All content from Kiddle encyclopedia articles (including the article images and facts) can be freely used under Attribution-ShareAlike license, unless stated otherwise. Cite this article:
Port Hueneme, California Facts for Kids. Kiddle Encyclopedia.