American Radio Archives is located within the Thousand Oaks Library in Thousand Oaks, California and contains one of the largest collections of radio broadcasting in the United States and in the world. The archives was established in 1984 by the Thousand Oaks Library Foundation. The collections include 23,000 radio and TV scripts, 10,000 photographs, 10,000 books on radio history, and 5,000 audio recordings. The archives also house manuscripts, sound recordings, scripts, books, photographs and other materials related to the history of radio and radio broadcasting.

The American Radio Archives are part of the Special Collections Department at Grant R. Brimhall Library. The purpose of the archives is to collect, preserve, and share materials related to the history of the radio in perpetuity. The Archives has collected materials since the 1990s. They now also house materials from the Pacific Pioneer Broadcasters, an organization of people working in radio or related fields. The addition of the Pacific Pioneer Broadcasters materials greatly expanded the collection in both size and scope.

Radio collections include TV material, as actors and writers often crossed into the other medium. The development of television is therefore a large part of radio’s history, and well represented at the Broadcasting Collection. The TV scripts of ARA belong to two groups: the general Broadcasting Collection and a number of smaller collections. The Broadcasting Collection consists of scripts purchased over the years from various sources. Smaller collections contain material compiled by institutions and individuals. The scripts span more than 40 years of American TV history, including live broadcasting in the 1940s through the 1980s. The ARA covers the spectrum of TV entertainment programming, from soap opera to comedy, westerns, dramas, crime series, and more.

American Radio Archives and Museum offers one of the largest collections of radio broadcasting in the United States and in the world. It has a collection of 23,000 radio and TV scripts, 10,000 photographs, 10,000 books on radio history, and 5,000 audio recordings. Notable collections include the Bob Crosby, Norman Corwin, Carlton E. Morse, Monty Masters, Rudy Vallée, and KNX AM collections. The Radio Series Scripts Collections contains scripts from 1930-1990, while the Radio Sound Records Collection contains recordings from 1932-1994.

The collections include scripts, books, personal papers, sound records, photographs, correspondence, and other material reflecting the history of radio- and TV broadcasting. Collections at the American Radio Archives tend to be named for the person who compiled the material. Oftentimes this is the script authors, but may also be a producer, actor, an institution, etc. 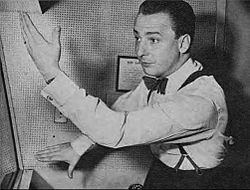 A full list of all collections held by the American Radio archives can be found on the website of the Thousand Oaks Library. There are forty-four collections listed on their website, though not all are searchable online. Just over half of the collections have online finding aids. Some of the most notable collections and resources include:

All content from Kiddle encyclopedia articles (including the article images and facts) can be freely used under Attribution-ShareAlike license, unless stated otherwise. Cite this article:
American Radio Archives Facts for Kids. Kiddle Encyclopedia.