Satwiwa (Chumash: "the bluffs") was a former Chumash village in the Santa Monica Mountains of Newbury Park, California. The current Satwiwa Native American Indian Culture Center is operated by the National Park Service in cooperation with the Friends of Satwiwa. Satwiwa has been inhabited by Chumash Indians for over 10,000 years. It is situated at the foothills of Boney Mountain, a sacred mountain for the Chumash.

The main trail from Satwiwa is nicknamed the backdoor to the Point Mugu State Park. Satwiwa is one of the four primary entrances to the Santa Monica Mountains National Recreation Area.

Satwiwa is Chumashan and directly translates to "the bluffs." By strict definition, the name, which also can translate to "higher places", originally referred to the neighboring mountain, known as Boney Mountain. Satwiwa (Sat-wi'wa) was also the Chumashan name used for a former village near the current culture center. The original Chumash village was just north of Big Sycamore Canyon in southern Newbury Park, at the foothills of Mount Boney. 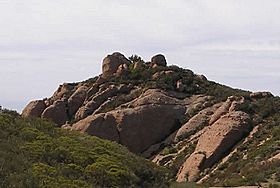 Satwiwa is located at the foothills of Boney Mountain, a sacred mountain to the Chumash Native-Americans.

Native American Indians have lived in the area for over 10,000 years. With a lifestyle based on the food abundance and materials provided by the environment, they fished in the Pacific Ocean and hunted deer and rabbits in the canyons. They also gathered acorns from the surrounding oak trees in which they grinded for food. Prosperous, the tribes lived in the center of a commerce that extended up and down the coast, as far west as the California Channel Islands. The Spaniards were the first Europeans to arrive here when they arrived in the 1500s. During the colonization, the Spanish established various nearby missions to claim the territory for Spain. With the arrival of the Spanish, Satwiwa became a portion of Rancho El Conejo.

Native-Americans of Chumash, Tataviam, Tongva and Vanyume ancestries are still utilizing Satwiwa in order to keep traditions alive. Native-American culture is often showcased through a variety of contemporary programs, arts and displays. Traditional- and religious ceremonies and dances are still held at Satwiwa.

Satwiwa was purchased by the U.S. National Park Service in 1980. Situated in the Santa Monica Mountains of Newbury Park, California, the Satwiwa Native-American Indian Culture Center is operated in partnership between Native Chumash Indians and the U.S. National Park Service. The center offers a diverse range of educational lectures and workshops, Native-American art displays, and more. 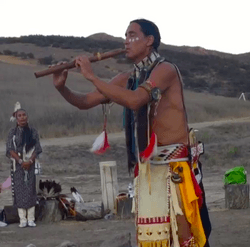 The Ventureño Chumash Indians first settled in Satwiwa 13,000 years ago, and lived in the village as recently as 2,000 years ago. The village served as a post for travelers and traders who crossed the Santa Monica Mountains through the Sycamore Canyon in order to get from the Conejo Valley to the Mugu Lagoon and the Pacific Ocean. The Chumash traded with the Gabrieleño-Tongva Indians, who mostly lived in areas of Los Angeles County. Numerous Chumash artifacts and petroglyphs have been discovered in the surrounding area, particularly along the Arroyo Conejo on its way to its estuary in the Mugu Lagoon. Satwiwa is situated at the foothills of Boney Mountain, which is a sacred mountain for the Chumash people. Many of the artifacts are for display at the Satwiwa Native American Indian Culture Center and the Chumash exhibit at the Stagecoach Inn Museum in Newbury Park, as well as at the Chumash Indian Museum in Thousand Oaks.

Satwiwa is still regularly used by Native-American groups, particularly by the Chumash Barbareño-Ventureño Band of Mission Indians for events such as community dancing and celebrations of various ceremonies, e.g. summer solstice and the Hutash ceremony.

The original inhabitants of the village of Satwiwa recognized Boney Mountain as the sacred home of all of creation. The peak remains sacred to the Chumash people today. The cultural center houses a Chumash demonstration village which sits across the path from the center. This reconstructed Chumash village houses the traditionally made ‘ap (houses). It is particularly visited during weekends when Native-American teachers and National Park rangers are present. 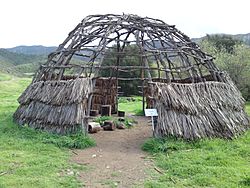 A Chumash 'ap (house) at the demonstration village.

Over 100 miles of trails can be found within Point Mugu State Park, which is one of California’s largest state parks. Almost half the state park’s total area make up Boney Mountain State Wilderness Area, a natural wilderness surrounding Mount Boney, a sacred mountain to the Chumash people. Several trails lead to a series of cascades, mountain overlooks, and some cross the Santa Monica Mountains leading to the coast of Point Mugu. While Old Boney Loop leads from Satwiwa to the heart of the Boney Mountain State Wilderness, the shorter hike to Sycamore Canyon Waterfall is 3.5 miles roundtrip from the Satwiwa Native American Culture Center. Sycamore Canyon Waterfall consists of a 70-foot series of cascades near a tree-covered creek bed.

There are numerous overlapping trails throughout the surrounding area, and trails are utilized by both runners, hikers, equestrians, mountain bikers, and others. 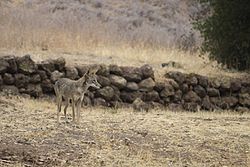 The surrounding area is home of a variety of wildlife, including rattlesnakes and mountain lions. 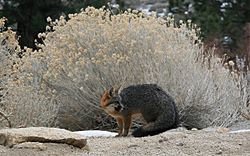 The surrounding Santa Monica Mountains National Recreation Area (SMMNRA) is home to more than 45 species of mammals. List of mammals found in SMMNRA:

All content from Kiddle encyclopedia articles (including the article images and facts) can be freely used under Attribution-ShareAlike license, unless stated otherwise. Cite this article:
Satwiwa Facts for Kids. Kiddle Encyclopedia.