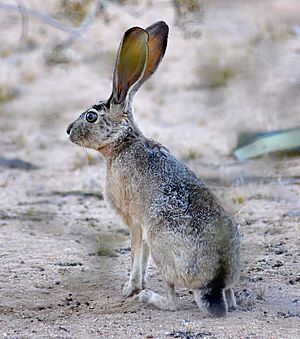 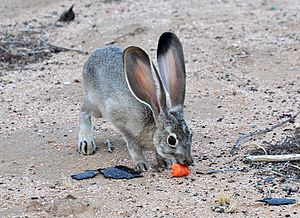 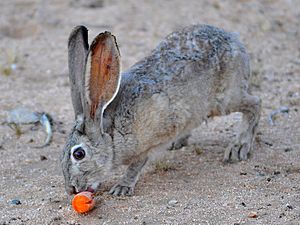 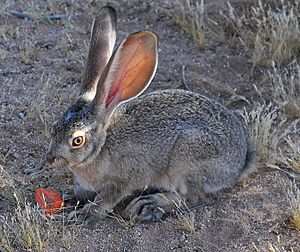 An adolescent black-tailed jackrabbit in the Mojave Desert, California.

The black-tailed jackrabbit (Lepus californicus), also known as the American desert hare, is a common hare of the western United States and Mexico, where it is found at elevations from sea level up to 10,000 ft (3,000 m). Reaching a length around 2 ft (61 cm), and a weight from 3 to 6 lb (1.4 to 2.7 kg), the black-tailed jackrabbit is one of the largest North American hares. Black-tailed jackrabbits occupy mixed shrub-grassland terrains. Their breeding depends on the location; it typically peaks in spring, but may continue all year round in warm climates. Young are born fully furred with eyes open; they are well camouflaged and are mobile within minutes of birth, thus females do not protect or even stay with the young except during nursing. The average litter size is around four, but may be as low as two and as high as seven in warm regions.

The black-tailed jackrabbit does not migrate or hibernate during winter and uses the same habitat of 0.4 to 1.2 mi2 (1–3 km2) year-round. Its diet is composed of various shrubs, small trees, grasses, and forbs. Shrubs generally comprise the bulk of fall and winter diets, while grasses and forbs are used in spring and early summer, but the pattern and plant species vary with climate. The black-tailed jackrabbit is an important prey species for raptors and carnivorous mammals, such as eagles, hawks, owls, coyotes, foxes, and wild cats. The hares host many ectoparasites including fleas, ticks, lice, and mites; for this reason, hunters often avoid collecting them. 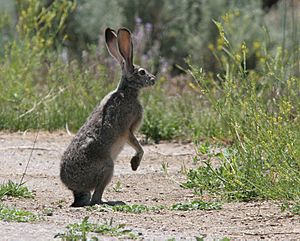 Distribution of subspecies occurring entirely or partially in the United States is:

Male black-tailed jackrabbits reach sexual maturity around 7 months of age. Females usually breed in the spring of their second year, although females born in spring or early summer may breed in their first year. Ovulation is induced by copulation. The breeding season is variable depending upon latitude and environmental factors. In the northern part of their range in Idaho, black-tailed jackrabbits breed from February through May. In Utah, they breed from January through July, with over 75% of females pregnant by April. The Kansas breeding season extends from January to August. Breeding in warm climates continues nearly year-round. Two peak breeding seasons corresponding to rainfall patterns and growth of young vegetation occur in California, Arizona, and New Mexico. In Arizona, for example, breeding peaks during winter (January–March) rains and again during June monsoons.

The gestation period ranges from 41 to 47 days. More litters are born in warm climates: the number of litters born each year ranges from two per year in Idaho to seven in Arizona. Litter sizes are largest in the northern portions of black-tailed jackrabbit's range and decrease toward the south. Average litter size has been reported at 4.9 in Idaho, 3.8 in Utah, and 2.2 in Arizona.

Female black-tailed jackrabbits do not prepare an elaborate nest. They give birth in shallow excavations called forms that are no more than a few centimeters deep. Females may line forms with hair prior to giving birth, but some drop litters in existing depressions on the ground with no further preparation. Young are born fully furred with eyes open, and are mobile within minutes of birth. Females do not protect or even stay with the young except during nursing. Ages of weaning and dispersal are unclear since the young are well camouflaged and rarely observed in the field. Captive black-tailed jackrabbits are fully weaned by 8 weeks. The young stay together for at least a week after leaving the form. 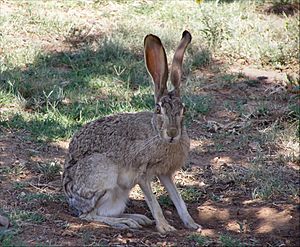 Black-tailed jackrabbit in Texas, cooling off in the shade on a hot summer's day

Black-tailed jackrabbits do not migrate or hibernate during winter; the same habitat is used year-round. Diurnal movement of 2 to 10 miles (3–16 km) occurs from shrub cover in day to open foraging areas at night. Home range area varies with habitat and habitat quality. Home ranges of 0.4 to 1.2 mi2 (1–3 km2) have been reported in big sagebrush (Artemisia tridentata) and black greasewood (Sarcobatus vermiculatus) communities of northern Utah.

Black-tailed jackrabbits require shrubs or small conifers for hiding, nesting, and thermal cover, and grassy areas for night feeding. A shrub-grassland mosaic or widely spaced shrubs interspersed with herbs provides hiding cover while providing feeding opportunities. Small shrubs do not provide adequate cover. In the Snake River Birds of Prey Study Area in southwestern Idaho, black-tailed jackrabbits were more frequent on sites dominated by big sagebrush or black greasewood than on sites dominated by the smaller shrubs winterfat (Krascheninnikovia lanata) or shadscale (Atriplex confertifolia). Black-tailed jackrabbits do not habitually use a burrow, although they have occasionally been observed using abandoned burrows for escape and thermal cover.

The black-tailed jackrabbit diet is composed of shrubs, small trees, grasses, and forbs. Throughout the course of a year, black-tailed jackrabbits feed on most if not all of the important plant species in a community. Growth stage and moisture content of plants may influence selection more than species. Shrubs generally comprise the bulk of fall and winter diets, while grasses and forbs are used in spring and early summer. This pattern varies with climate: herbaceous plants are grazed during greenup periods while the plants are in pre-reproductive to early reproductive stages, and shrubs are used more in dry seasons. Shrubs are browsed throughout the year, however. Most of a jackrabbit's body water is replaced by foraging water-rich vegetation. Jackrabbits require a plant's water weight to be at least five times its dry weight to meet daily water intake requirements. Therefore, black-tailed jackrabbits switch to phreatophyte (deep-rooted) shrubs when herbaceous vegetation is recovering from their foraging.

In Great Basin, big sagebrush is a primary forage species and is used throughout the year; in southern Idaho it forms 16–21% of the black-tailed jackrabbit summer diet. Rabbitbrush (Chrysothamnus spp.), spiny hopsage (gray spinosa), and black greasewood are also browsed. Four-wing saltbush (Atriplex canescens) is heavily used in western Nevada. In Butte County, Idaho, winterfat comprises 41% of black-tailed jackrabbits' annual diet. Grasses comprise 14% of the diet, with most grass consumption in March and April. Russian thistle (Salsola kali) is an important forb diet item. Needle-and-thread grass (Stipa comata) and Indian ricegrass (Oryzopsis hymenoides) are preferred grasses. Other preferred native grasses include Sandberg bluegrass (Poa secunda) and bluebunch wheatgrass (Pseudoroegneria spicata). Where available, crested wheatgrass (Agropyron desertorum and Agropyron cristatum) and barley (Hordeum vulgare) are highly preferred. Cheatgrass (Bromus tectorum) use is variable: it comprises 45% of the April diet on two southern Idaho sites, but black-tailed jackrabbit on an eastern Washington site do not use it. 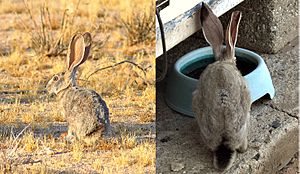 In the Mojave Desert, a thirsty black-tailed jackrabbit senses water nearby on a human's property, and risks venturing onto the property to steal a drink of water from a dog's water bowl under a swamp cooler.

The black-tailed jackrabbit plays host to many ectoparasites including fleas, ticks, lice, and mites, and many endoparasites including trematodes, cestodes, nematodes, and botfly (Cuterebra) larvae. Diseases affecting the black-tailed jackrabbit in the West are tularemia, equine encephalitis, brucellosis, Q fever, and Rocky Mountain spotted fever. Ticks are vectors for tularemia, and infected ticks have been found on jackrabbits in the West. Jackrabbits infected with tularemia die very quickly.

The high prevalence of disease and parasites in wild jackrabbits affects human predation. Many hunters will not collect the jackrabbits they shoot, and those who do are well-advised to wear gloves while handling carcasses and to cook the meat thoroughly to avoid contracting tularemia. Most hunting of jackrabbits is done for pest control or sport.

All content from Kiddle encyclopedia articles (including the article images and facts) can be freely used under Attribution-ShareAlike license, unless stated otherwise. Cite this article:
Black-tailed jackrabbit Facts for Kids. Kiddle Encyclopedia.