The flea (siphonaptera) is an insect that lives on many kinds of animals and sometimes humans. Fleas are considered parasites, and they drink the blood of the animal they bite.

Fleas can live outdoors in sand or tall grass, and they will jump to any passing animal and lay eggs. Flea bites are usually red bumps and they itch. They can carry disease and make animals sick.

There are several types of flea including the dog flea, cat flea, human flea, northern rat flea, and the oriental rat flea. During the Middle Ages, the oriental rat flea spread a bacteria that caused the Bubonic Plague, also known as the Black Death or Black Plague, a huge epidemic much more severe than today's bird flu. The oriental rat flea would become infected by the bacteria Yersinia pestis. After infection the bacteria grew inside of the flea, eventually blocking the path to its stomach. Because of this, the flea was always hungry. When the flea would bite a human it opened up the skin but since the stomach of the flea was blocked, the blood from the human was heaved up back into the human, only this time it was infected with the Bubonic plague bacteria.

Fleas are wingless insects, 1/16 to 1/8-inch (1.5 to 3.3 mm) long, that are agile, usually dark colored (for example, the reddish-brown of the cat flea), with a proboscis, or stylet, adapted to feeding by piercing the skin and sucking their host's blood through their epipharynx. Flea legs end in strong claws that are designed to grasp a host.

Unlike other insects, fleas do not possess compound eyes but instead only have simple eyespots with a single biconvex lens; some species lack eyes altogether. Their bodies are laterally compressed, permitting easy movement through the hairs or feathers on the host's body (or in the case of humans, under clothing). The flea body is covered with hard plates called sclerites. These sclerites are covered with many hairs and short spines directed backward, which also assist its movements on the host. The tough body is able to withstand great pressure, likely an adaptation to survive attempts to eliminate them by scratching.

Fleas lay tiny, white, oval eggs. The larvae are small and pale, have bristles covering their worm-like bodies, lack eyes, and have mouth parts adapted to chewing. The larvae feed on organic matter, especially the feces of mature fleas, which contain dried blood. Adults feed only on fresh blood. 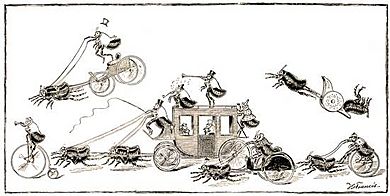 A flea circus: "The Go-As-You-Please Race, as seen through a Magnifying Glass", engraved by J. G. Francis, from an article by C. F. Holder in St. Nicholas Magazine, 1886

Their legs are long, the hind pair well adapted for jumping; a flea can jump vertically up to 7 in (18 cm) and horizontally up to 13 in (33 cm), making the flea one of the best jumpers of all known animals (relative to body size), second only to the froghopper. The flea jump is so rapid and forceful that it exceeds the capabilities of muscle, and instead of relying on direct muscle power, fleas store muscle energy in a pad of the elastic protein named resilin before releasing it rapidly (like a human using a bow and arrow). Immediately before the jump, muscles contract and deform the resilin pad, slowly storing energy which can then be released extremely rapidly to power leg extension for propulsion. To prevent premature release of energy or motions of the leg, the flea employs a "catch mechanism". Early in the jump, the tendon of the primary jumping muscle passes slightly behind the coxa-trochanter joint, generating a torque which holds the joint closed with the leg close to the body. To trigger jumping, another muscle pulls the tendon forward until it passes the joint axis, generating the opposite torque to extend the leg and power the jump by release of stored energy. The actual take off has been shown by high-speed video to be from the tibiae and tarsi rather than from the trochantera (knees). 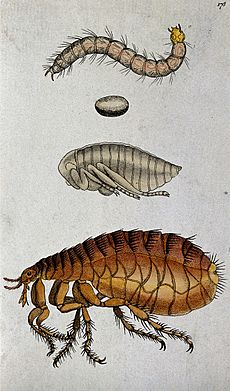 Fleas are holometabolous insects, going through the four lifecycle stages of egg, larva, pupa, and imago (adult). In most species, neither female nor male fleas are fully mature when they first emerge but must feed on blood before they become capable of reproduction. The first blood meal triggers the maturation of the ovaries in females and the dissolution of the testicular plug in males, and copulation soon follows. Some species breed all year round while others synchronise their activities with their hosts' life cycles or with local environmental factors and climatic conditions. Flea populations consist of roughly 50% eggs, 35% larvae, 10% pupae, and 5% adults.

The number of eggs laid depends on species, with batch sizes ranging from two to several dozen. The total number of eggs produced in a female's lifetime (fecundity) varies from around one hundred to several thousand. In some species, the flea lives in the nest or burrow and the eggs are deposited on the substrate, but in others, the eggs are laid on the host itself and can easily fall off onto the ground. Because of this, areas where the host rests and sleeps become one of the primary habitats of eggs and developing larvae. The eggs take around two days to two weeks to hatch. Experiments have shown that fleas lay more eggs on hosts which have limited food intakes, and that eggs and larvae survive better under these conditions, perhaps because the host's immune system is compromised. 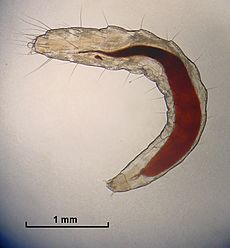 Flea larvae emerge from the eggs to feed on any available organic material such as dead insects, faeces, conspecific eggs, and vegetable matter. In laboratory studies, some dietary diversity seems necessary for proper larval development. Blood-only diets allow only 12% of larvae to mature, whereas blood and yeast or dog chow diets allow almost all larvae to mature. Another study also showed that 90% of larvae matured into adults when the diet included nonviable eggs. They are blind and avoid sunlight, keeping to dark, humid places such as sand or soil, cracks and crevices, under carpets and in bedding.

Given an adequate supply of food, larvae pupate and weave silken cocoons after three larval stages. Within the cocoon, the larva moults for a final time and undergoes metamorphosis into the adult form. This can take just four days, but may take much longer under adverse conditions, and there follows a variable-length stage during which the pre-emergent adult awaits a suitable opportunity to emerge. Trigger factors for emergence include vibrations (including sound), heat (in warm-blooded hosts), and increased levels of carbon dioxide, all of which stimuli may indicate the presence of a suitable host. Large numbers of pre-emergent fleas may be present in otherwise flea-free environments, and the introduction of a suitable host may trigger a mass emergence. 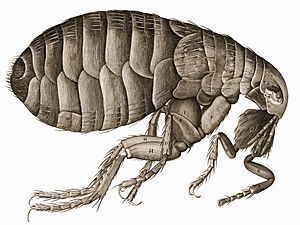 Robert Hooke's drawing of a flea in Micrographia, 1665

Once the flea reaches adulthood, its primary goal is to find blood and then to reproduce. Female fleas can lay 5000 or more eggs over their life, permitting rapid increase in numbers. Generally speaking, an adult flea only lives for 2 or 3 months. Without a host to provide a blood meal, a flea's life can be as short as a few days. Under ideal conditions of temperature, food supply, and humidity, adult fleas can live for up to a year and a half. Completely developed adult fleas can live for several months without eating, so long as they do not emerge from their puparia. Optimum temperatures for the flea's life cycle are 21 °C to 30 °C (70 °F to 85 °F) and optimum humidity is 70%.

Adult female rabbit fleas, Spilopsyllus cuniculi, can detect the changing levels of cortisol and corticosterone hormones in the rabbit's blood that indicate it is getting close to giving birth. This triggers sexual maturity in the fleas and they start producing eggs. As soon as the baby rabbits are born, the fleas make their way down to them and once on board they start feeding, mating, and laying eggs. After 12 days, the adult fleas make their way back to the mother. They complete this mini-migration every time she gives birth.

All content from Kiddle encyclopedia articles (including the article images and facts) can be freely used under Attribution-ShareAlike license, unless stated otherwise. Cite this article:
Flea Facts for Kids. Kiddle Encyclopedia.