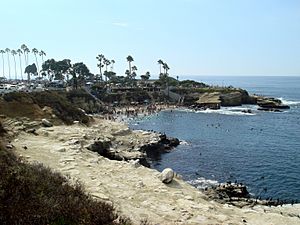 La Jolla is a neighborhood in the city of San Diego, in the state of California, in the United States. It is pronounced "La Hoya".

The University of California, San Diego is in La Jolla. Another famous place in La Jolla is the Salk Institute.

All content from Kiddle encyclopedia articles (including the article images and facts) can be freely used under Attribution-ShareAlike license, unless stated otherwise. Cite this article:
La Jolla, San Diego Facts for Kids. Kiddle Encyclopedia.