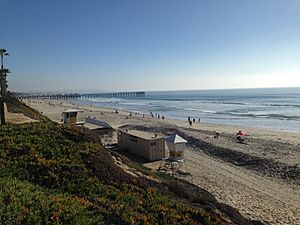 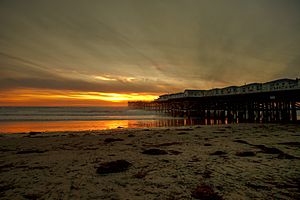 The Crystal Pier at sunset 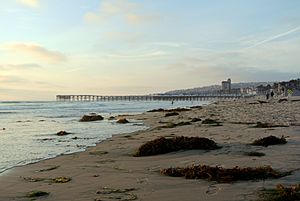 Pacific Beach is a neighborhood in San Diego, bounded by La Jolla to the north, Mission Beach and Mission Bay to the south, Interstate 5 to the east and the Pacific Ocean to the west. While formerly largely populated by young people, surfers, and college students, because of rising property and rental costs the population is gradually becoming older and more affluent. "P.B.," as it is known as by local residents, is home to one of San Diego's more developed nightlife scenes, with a great variety of bars, eateries, and clothing stores located along Garnet Avenue and Mission Boulevard.

Pacific Beach's namesake stretches for miles from the Mission Bay jetty to the cliffs of La Jolla. The boardwalk, officially called Ocean Front Walk/Ocean Boulevard, is a pedestrian walkway that runs approximately 3.2 miles along the beach from the end of Law St. in the north down into Mission Beach, ending at the mouth of Mission Bay in the south. There are numerous local shops, bars, hotels, and restaurants along the boardwalk, and it is generally crowded with pedestrians, cyclists, rollerbladers, and shoppers. Adjacent to the boardwalk is the Crystal Pier, a public pier and hotel at the west end of Garnet Avenue.

The streets in Pacific Beach were renamed several times before receiving their current designations in 1900. The primary north-south street running parallel to the beach is Mission Blvd., with the streets named after late 19th century federal officials, then incrementing in alphabetical order as they move further from the coast: Bayard, Cass, Dawes, Everts, Fanuel, Gresham, Haines, Ingraham, Jewell, Kendall, Lamont, Morrell, Noyes, Olney, and Pendleton. Mission Boulevard was formerly Allison Street, being the "A" street of the series.

The east-west streets are mostly named after precious stones. Starting at the north end of Mission Blvd. and heading south, the streets are:

Pacific Beach was developed during the boom years of 1886-1888 by D. C. Reed, A. G. Gassen, Charles W. Pauley, R. A. Thomas, and O. S. Hubbell. It was Hubbell who "cleared away the grainfields, pitched a tent, mapped out the lots, hired an auctioneer and started to work". To attract people, they built a race track and the San Diego College of Letters, neither of which survive today. A railway also connected Pacific Beach with downtown San Diego, and was later extended to La Jolla.

As with many Californian cities, the history of its development can be traced back to the completion of a cross-country railroad in the late 1880s. In 1902, lots sold for between $350–700 for ocean-front property and by 1950, the population of Pacific Beach reached 30,000 and the average home sold for $12,000. Nonetheless, a small number of farms remained. Today, homes can sell for millions.

The United States Navy operated an anti-aircraft training center at Pacific Beach during World War II. During the 1960s, development continued to increase with the city’s investment in Mission Bay Park, including the developments of the Islandia, Vacation Village and Hilton Hotels. In 1964 Sea World opened, which is located only a few miles from Pacific Beach.

The original name of this feature was "Bay Point" and today one may still find a USGS bench mark and associated RM (DC1025, DC1026 respectively) with that name there. The "Bay Point Formation" is the name of a local rock strata first found and described there.

Today, Pacific Beach is home to a younger crowd, including college students, single professionals, and families. The restaurant and nightlife culture has grown extensively, with Garnet Avenue becoming the major hub for places to eat, drink, and shop, and includes a range of bars, restaurants, pubs, and coffee houses. 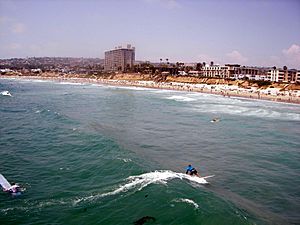 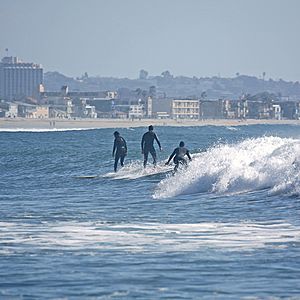 All content from Kiddle encyclopedia articles (including the article images and facts) can be freely used under Attribution-ShareAlike license, unless stated otherwise. Cite this article:
Pacific Beach, San Diego Facts for Kids. Kiddle Encyclopedia.