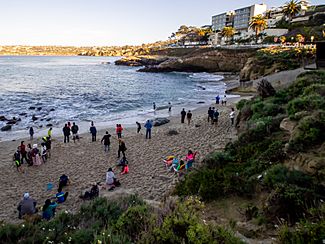 La Jolla Cove is a small, picturesque cove and beach that is surrounded by cliffs in La Jolla, San Diego, California. The Cove is protected as part of a marine reserve; underwater it is very rich in marine life, and is popular with snorkelers, swimmers and scuba divers.

The swells that often roll in from the open ocean here can be rather large and strong, and so being in the water at the Cove is not always suitable for people who do not have good water skills. The water temperature is also often a little colder than the average San Diego beach, and the beach has the disadvantage that the dry sand area is very small at high tide. In contrast, during very low tides, a lot of interesting tide pools are revealed at the Cove.

California sea lions can be found in the waters of the Cove and hauling out, temporarily leaving the water to rest on its beaches, cliffs, and bluffs. Similar to the events of the Pacific harbor seals at Children's Pool Beach, there is controversy surrounding their presence. 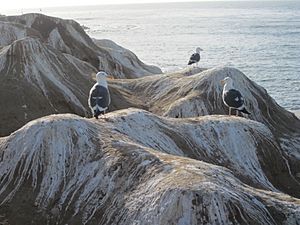 Free public parking is extremely limited and is all on-street; there are also paid parking garages in the area. From the park at the top of the Cove, there are a few steps down on each side to a "gallery" area with a lot of benches. This gallery includes the entrance to the lifeguard station, where the lifeguard's chalkboard shows useful information updated throughout the day. From the gallery level there are two steep sets of concrete steps that lead down to the beach itself, although visitors often have to step on rocks to get all the way down to the sand.

Prospective visitors should be aware that the air throughout the La Jolla Cove area is filled with the odor of seal and bird feces. The stench can be especially offensive on the warmest days in the summer. The extensive fecal contamination also has caused unsafe swimming conditions. 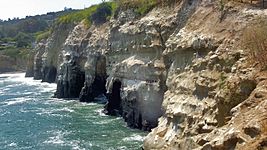 The "7 caves" of La Jolla, just north of the cove. 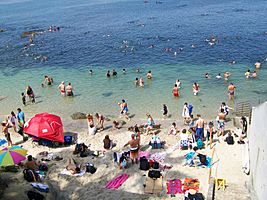 Part of the beach and shallow water at the Cove

The beach at the Cove is very small, and the sand is gritty. Lifeguards are present at the Cove every day of the year from 9 am until the sun sets. The Cove is a very popular spot for swimming, snorkeling and scuba diving. During summer, there are two swim buoys placed at 1/4mile and 1/2 mile distances from the Cove. More adventurous swimmers will attempt to swim to Scripps Pier and back, totaling 3 miles round trip. The cove is home to many open water swimming events year round including the Rough Water Swim and the 10 Mile Relay swim.

Because La Jolla Cove is within the San Diego-La Jolla Underwater Park (a marine refuge area), swimming devices such as surfboards, boogie boards, and even inflatable mattresses, are not permitted, and kayakers are not allowed into the Cove; these rules are carefully enforced by the lifeguards on duty. Also because the Cove is an ecological reserve, no fishing is allowed. In addition, no collecting of marine invertebrates, (even taking dead specimens or seashells) is allowed in this area. All sea animals in this area are protected by law, including the orange Garibaldi fish, which are unusually common in the Cove. There are hundreds of sea lions that call the La Jolla Cove home, sometimes being seen in the deeper-water parts of the Cove or basking on rocks.

As is the case at other beaches, the lifeguard's chalkboard indicates the time of the next high or low tide, and also the water temperature. The water temperature in the Cove is sometimes cooler than in some other areas of San Diego's coastline because the Cove faces out into much deeper, colder, water. The weather on land is typical of weather in La Jolla, where the temperature year-round seldom exceeds the 50 degrees to 90 degrees range.

Right at the top of the Cove there is a group of outdoor showers, and large public restrooms which include one indoor shower and an indoor area with benches and hooks for changing in and out of swimsuits.

According to the Marine Mammal Protection Act (MMPA), while there is no explicitly defined distance in feet to stay away from pinnipeds, including California sea lions, harassing pinnipeds is illegal, and the MMPA defines harassment in two ways:

Furthermore, the Cove is a public beach as defined by the California Coastal Act and overseen by the California Coastal Commission. Therefore, there is disagreement about who can use the beach and to what extent. Currently the City is pursuing a shared-use policy with educational signs, interpretive docents, and law enforcement by park rangers, lifeguards, and policemen to ensure respect for the wildlife while permitting full use of the beaches.

Up on the bluffs above the beach, and stretching south to other nearby beaches, including Shell Beach and Children's Pool Beach, is Scripps Park, a well-maintained grassy area with trees and other plantings. Scripps Park is used for picnicking and relaxing.

The La Jolla sea caves, or "The 7 caves of La Jolla", are just north of the cove. The best known of these is "Sunny Jim Cave", a short walking distance from the Cove and from the local businesses that are situated up above the shoreline. The cave is accessible through The Cave Store, which charges a nominal fee to go down a staircase leading to the cave itself.

The La Jolla Cove is home to the annual "La Jolla Cove Rough Water Swim" in September which is one of the oldest ocean swims in the world. It is also home to the Annual Concours d’Elegance held at the Scripps Park every spring.

All content from Kiddle encyclopedia articles (including the article images and facts) can be freely used under Attribution-ShareAlike license, unless stated otherwise. Cite this article:
La Jolla Cove Facts for Kids. Kiddle Encyclopedia.