The Museum of Contemporary Art San Diego (or MCASD), in San Diego, California, US, is an art museum focused on the collection, preservation, exhibition, and interpretation of works of art from 1950 to the present. 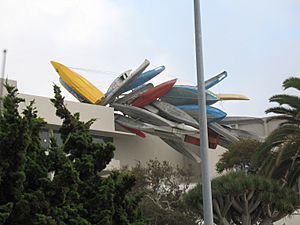 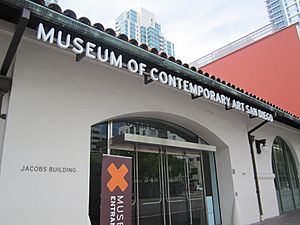 The entrance of Museum of Contemporary Art, downtown San Diego 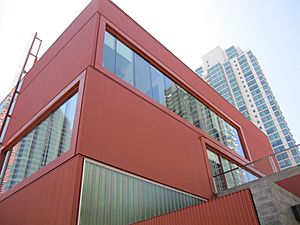 Founded in 1941 in La Jolla as The Art Center in La Jolla, a community art center, through the 1950s and 1960s the organization operated as the La Jolla Art Museum. The museum was originally the 1915 residence of newspaper heiress and philanthropist Ellen Browning Scripps, designed by the noted architect Irving Gill.

In 2007, a $25-million downtown location of the Museum was opened, designed by architect Richard Gluckman of Gluckman Mayner Architects, New York. The expansion added 30,000 square feet (2,800 square metres) of space to the downtown site and increases its exhibition space from about 6,000 square feet (560 square metres) to 16,500 square feet (1,530 square metres). At the north end of the building is a three-story structure of corrugated steel and textured glass. It houses curatorial offices, art-handling and storage facilities, an art education classroom, a lecture hall that opens onto a terrace and a boardroom with a view of the harbor. The renovated baggage building is named for Irwin M. Jacobs, founder of the technology company Qualcomm, and his wife, Joan. The three-story Modernist structure bears the name of philanthropist and newspaper publisher David C. Copley.

In 2014, the Museum of Contemporary Art San Diego chose architect Annabelle Selldorf to head a $30 million expansion that is expected to triple the size of the museum's location in La Jolla. The project will create more gallery space to exhibit the museum's permanent collection, as well as additional space for education. The museum’s footprint will be expanded to include properties (now residential but owned by the museum) on both sides of the institution, and the space that now houses Sherwood Auditorium will be reconfigured as a gallery with potential exhibit space of approximately 8,000 square feet.

The Copley Building is outfitted with two specially commissioned permanent installations. Roman De Salvo made light fixtures of industrial materials for walls of the stairwell. Outside the building, Jenny Holzer created a parade of her trademark truisms to be spelled out vertically in light-emitting diodes. The words run through clear plastic tubes that she calls icicles.

MCASD has a permanent endowment fund of over $40 million, and an annual operating budget of approximately $6 million. Annual support comes from a balanced mix of individuals, corporations, foundations, government agencies, and interest earned from the endowment, the majority of which came from a transformational 1999 bequest from Rea and Jackie Axline of more than $30 million.

From 1983 to 2016, Hugh Davies steered the museum as director. From October 2016, Kathryn Kanjo will become the museum's director and CEO.

All content from Kiddle encyclopedia articles (including the article images and facts) can be freely used under Attribution-ShareAlike license, unless stated otherwise. Cite this article:
Museum of Contemporary Art San Diego Facts for Kids. Kiddle Encyclopedia.