San Jacinto ( san-_-hə-SIN-toh-,_-yə; Spanish for "St. Hyacinth") is a city in Riverside County, California. It is located at the north end of the San Jacinto Valley, with Hemet to its south and Beaumont, California, to its north. The mountains associated with the valley are the San Jacinto Mountains. The population was 44,199 at the 2010 census. The city was founded in 1870 and incorporated on April 20, 1888, making it one of the oldest cities in Riverside County.

The city is home to Mt. San Jacinto College, a community college founded in 1965. San Jacinto will also be home to the eastern end of the Mid County Parkway, a planned route that would eventually connect it to the city of Perris. In the late 19th century and early 20th century, the city became a home to many dairies, and a center for agriculture.

San Jacinto also is home to the Soboba Casino, a gaming casino owned and operated by the Soboba Band of Luiseño Indians. The Sobobas are sovereign and self-sufficient in community affairs. They operate an Indian tribal school, the Noli Academy.

The Luiseño were the original inhabitants of what later would be called the San Jacinto Valley, having many villages with residents. In their own language, these people called themselves Payomkowishum (also spelled "Payomkawichum"), meaning People of the West. They are a Native American people who at the time of the first contacts with the Spanish in the sixteenth century, inhabited the coastal area of southern California, ranging fifty miles from what now is the southern part of Los Angeles County, California to the northern part of contemporary San Diego County, California, and their settlements extended inland for thirty miles.

The tribe was named Luiseño by the Spanish due to their proximity to the Mission San Luís Rey de Francia ("The Mission of Saint Louis King of France," known as the "King of the Missions"), which was founded on June 13, 1798 by Father Fermín Francisco de Lasuén, in what was the First Military District in what now is Oceanside, California, in northern San Diego County.

The Anza Trail, one of the first European overland routes to California, named after Juan Bautista de Anza,4 crossed the valley in the 1770s. Mission padres named the valley, San Jacinto, which is Spanish for Saint Hyacinth, and around 1820 they established an outpost there.

In 1842 José Antonio Estudillo received the Rancho San Jacinto Viejo Mexican land grant. In the 1860s, the Estudillo family began selling off portions of their rancho and through acquisitions, a small American community began to form. In 1868, local residents petitioned to form a school district and by 1870 a store and post office had been established. With these establishments, 1870 is considered the founding date of San Jacinto.

A plan for the community was developed in 1883 and a city government for it was incorporated on April 20, 1888, within San Diego County. San Jacinto is one of the oldest American cities in the region. In May 1893, Riverside County was created by the division of northern San Diego County and part of what now is San Bernardino County, changing the county government over San Jacinto as the new county was created.

In 1883, the San Jacinto Land Association laid out the modern city of San Jacinto at Five Points. The railroad arrived in 1888 and the city government was incorporated that same year.

The local economy was built on agriculture for many years and the city also received a boost from the many tourists who visited the nearby hot springs. The city, and its residents, helped to start the Ramona Pageant ( California's official State Outdoor Play), in 1923, and have supported the historic production ever since.

On July 15, 1937, San Jacinto was the end point for the longest uninterrupted airplane flight to that date when Mikhail Gromov's crew of three made the historic 6,262-mile (10,078 km) polar flight from Moscow, USSR in a Tupolev ANT-25. This flight followed another similar historic flight over the pole when Valery Chkalov's crew of three ended up in Vancouver's Pearson Airfield earlier that same year. With these two flights, the USSR earned two major milestones in the Fédération Aéronautique Internationale (FAI) flight records. In the early 1950s the fraternal group E Clampus Vitus and the Riverside County Department of Transportation commemorated the Gromov flight by erecting a stone marker on Cottonwood Avenue, just west of Sanderson Road in west-central San Jacinto. The landing site is also marked by California State Historical Landmark Number 989.

Since local geological records have been kept, the city has been struck by two large earthquakes, one on Christmas Day in 1899, and the other on April 21, 1918.

According to the 2010 United States Census, San Jacinto had a median household income of $47,453, with 18.9% of the population living below the federal poverty line. 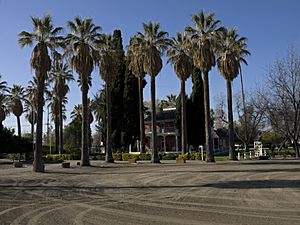 San Jacinto has a memorial to veterans at Druding Park, a tribute to the men and women of the U.S. Armed Services. In the park, each branch of the military has an equipment artifact used by its members in battle, as a symbol of their services. There is a tank for the Army, a propeller for the Air Force, an anchor for the Navy, a lighthouse for the Coast Guard, and in the near future the city government hopes to add a howitzer for the Marine Corps. Various plaques and memorials also grace the 1-acre (4,000 m2) park.

The city is also home to the Estudillo Mansion, which was home to Francisco Estudillo, who was the city's first postmaster and was elected as the city's second mayor. The mansion also has a twin mansion built by Estudillo's brother, Jose Antonio Estudillo, Jr. The two mansions and the grounds are all that remains of the original 35,000-acre (140 km2) Mexican land grant given to the brother's father, Jose Antonio Estudillo in 1842. The mansion was placed on the National Register of Historic Places and on the California Register of Historic Resources. This is only the third Riverside County site to receive this honor. Francisco lost his mansion to foreclosure in 1901, but even though Jose, his brother, died in the same year, his family retained his mansion and property, including the olive grove, and it was considered the Estudillo Estate, becoming the site of many family events, and a couple of family burials, until it was sold in 1919. Seven years later, Adelaide, Jose's wife died in Riverside.

The city is served by the Riverside County Sheriff's Department.

The city of San Jacinto contracts for fire and paramedic services with the Riverside County Fire Department through a cooperative agreement with CAL FIRE. Fire Station 25 is also a CAL FIRE fire station which has a wildland fire engine.

The So Cal Coyotes of the DFI (Developmental Football International) plays half their home games in the Soboba Casino Oaks Sports Complex and their home field in Rancho Mirage in 2013, but the team has moved their home field to Shadow Hills Stadium in Indio in 2018.

The Soboba Casino's sports complex also has an indoor sports facility for boxing events held in the Soboba Indian Reservation.

All content from Kiddle encyclopedia articles (including the article images and facts) can be freely used under Attribution-ShareAlike license, unless stated otherwise. Cite this article:
San Jacinto, California Facts for Kids. Kiddle Encyclopedia.