Jefferson County is a county located in the U.S. state of Tennessee. As of the 2010 census, the population was 51,407. Its county seat is Dandridge.

Jefferson County was established on June 11, 1792, by William Blount, Governor of the Southwest Territory. It had been a part of Caswell County during the State of Franklin period (1784–1789). Its county seat, Dandridge, was settled in 1783.

On the eve of the Civil War, Jefferson County, like most other counties in mountainous East Tennessee, was opposed to secession. In Tennessee's Ordinance of Secession referendum on June 8, 1861, Jefferson County voters rejected secession by a margin of 1,987 to 603. A railroad bridge at Strawberry Plains was among those targeted by the East Tennessee bridge-burning conspiracy in November 1861. This led to internal conflict in the area throughout the war, with men from the county enlisting in both of the rival armies. 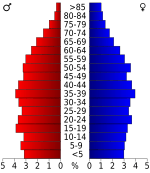 All content from Kiddle encyclopedia articles (including the article images and facts) can be freely used under Attribution-ShareAlike license, unless stated otherwise. Cite this article:
Jefferson County, Tennessee Facts for Kids. Kiddle Encyclopedia.