Farragut is a suburban town located in Knox and Loudon counties in the State of Tennessee, United States. The town's population was 23,506 at the 2020 census . It is included in the Knoxville Metropolitan Area. The town is named in honor of Union Admiral David Farragut, who was born just east of Farragut at Campbell's Station in 1801, and fought in the American Civil War.

The area was originally known as Campbell’s Station after a fort and stage coach station erected by Captain David Campbell (1753–1832) in 1787. The brick Campbell's Station Inn was built in 1810 and still stands on Kingston Pike within sight of the Farragut Town Hall. It is still in use as a private residence. The Civil War Battle of Campbell's Station was fought there on November 16, 1863.

The historic unincorporated village of Concord (listed on the National Register of Historic Places) was founded in 1854 just east of what would become the eastern boundary of Farragut. Concord is located on the main rail line to Atlanta and main channel of the Tennessee River, and was an important transloading center for the Tennessee marble industry in the late 19th century. Picturesque buildings and antebellum homes sit along the river, as well as several very old churches.

The original Farragut High School was built by the community in 1904, and moved to its current location in 1976. Some parts of Farragut are zoned for Hardin Valley Academy, built in 2008.

On January 16, 1980, Farragut incorporated as a town, mainly to avoid being annexed by Knoxville, which was trying to shore up its tax base by annexing affluent communities along Kingston Pike. The first mayor, Bob Leonard, was elected April 1, 1980, along with four aldermen. Alderman Eddy Ford became mayor in 1993 and served in that position until April 2009, when he failed to win re-election, losing to Dr. Ralph McGill, another of the original founders of the town government.

Farragut is situated in a hilly area between Blackoak Ridge to the north and the Tennessee River (Fort Loudoun Lake) to the south. Its municipal area is mostly located south of the merged Interstate 40/Interstate 75, with the exception of a few neighborhoods. Kingston Pike, a merged stretch of U.S. Route 70 and U.S. Route 11, traverses the town. Farragut borders Knoxville on the northeast, and the Knox County-Loudon County line forms most of its southwestern boundary. Concord lies immediately southeast of Farragut, and Hardin Valley lies opposite Blackoak Ridge to the north. The small community of Dixie Lee Junction lies along Kingston Pike, just across the Loudon County line.

There were 6,333 households, out of which 39.4% had children under the age of 18 living with them, 76.0% were married couples living together, 5.0% had a female householder with no husband present, and 17.4% were non-families. 15.2% of all households were made up of individuals, and 5.5% had someone living alone who was 65 years of age or older. The average household size was 2.76 and the average family size was 3.08.

According to the 2007 official Census Bureau estimates, median household income and median family income had risen to $94,420 and $108,236 respectively. 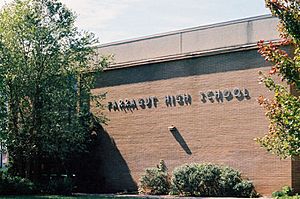 These schools are a part of Knox County Schools.

Most of Farragut is zoned to the following:

Although the schools are not in the town limits, Hardin Valley Middle School serves parts of Farragut north of Interstate 75 for grades 6-8, and Hardin Valley Academy serves that same portion for grades 9-12.

There is a private school, Knoxville Christian School.

All content from Kiddle encyclopedia articles (including the article images and facts) can be freely used under Attribution-ShareAlike license, unless stated otherwise. Cite this article:
Farragut, Tennessee Facts for Kids. Kiddle Encyclopedia.