The Candoro Marble Works is a marble cutting and polishing facility located in Knoxville, Tennessee, United States. Established as a subsidiary of the John J. Craig Company in 1914, the facility's marble products were used in the construction of numerous monumental buildings across the United States during the 1930s and 1940s. Although Candoro closed in 1982, independent marble fabricators continued using the facility until the early 21st century, when it was purchased by the preservation group, South Knox Heritage. In 1996, several of the facility's buildings were added to the National Register of Historic Places.

By the beginning of the 20th century, East Tennessee had become one of the nation's major suppliers of finished marble. The John J. Craig Company, which operated several quarries in the vicinity of Knoxville, was one of the region's top marble suppliers during this period. John J. Craig III, grandson of the company's founder, and three co-investors— F.C. Anderson, W.J. Donaldson, and S.A. Rodgers— established Candoro to cut and polish the company's quarried and imported marble. The name "Candoro" is a combination of the first letters of each cofounder's last name. The company's showroom and garage, completed in 1923, was designed by noted Knoxville architect Charles I. Barber (1887–1962).

The Candoro Marble Works is located in South Knoxville's Vestal community along Candora Road, spanning most of the north side of the road between its Maryville Pike (State Route 33) and Spruce Road intersections. The showroom is the easternmost building, lying adjacent to Maryville Pike, and is connected to Candora Road by an oft-photographed tree-lined allée. The large cutting facility lies to the west of the showroom and garage, and the finishing building lies immediately west of the cutting facility. A smaller building housing the boilers and company offices stands in front of the finishing building.

A marble scrap yard lies across the street from the cutting facility. Behind the scrap yard lies one of the so-called Witherspoon sites, where radioactive materials from the K-25 plant in Oak Ridge were recycled in the 1960s and 1970s. The Witherspoon sites were at the heart an environmental controversy in the 1980s that led to a multimillion-dollar cleanup effort by the Department of Energy. 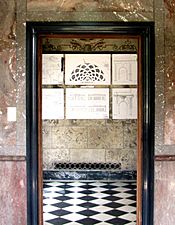 In the years after the Civil War, East Tennessee experienced a quarrying boom that focused on a type of pinkish Holston Formation limestone known as "East Tennessee marble." By 1900, nearly a dozen companies were operating quarries or finishing facilities in and around Knoxville, giving the city the nickname, "The Marble City." The John J. Craig Company, one of the most successful of these companies, operated quarries near Friendsville in Blount County and near Concord in Knox County.

To convert his company's quarried marble into finished products, John J. Craig III established a subsidiary, the Candoro Marble Company, which built the Candoro Marble Works complex. The site in South Knoxville was chosen for its proximity to both the railroad and Goose Creek, the latter of which provided water for the complex's steam boiler, which powered the complex's massive cutting machinery in the years before cheap electricity was available. While the company initially used its own locally quarried stone, it gradually began to rely more and more on marble imported from Europe and South America.

In 1927, Candoro hired Carrara, Italy-born stone carver Albert Milani (1892–1972) as its chief carver. During Milani's 40-year tenure, Candoro provided marble for buildings such as the Smithsonian Museum of History and Technology and the National Gallery of Art in Washington, as well as local buildings such as the Knoxville Post Office building. Notable hand-carvings by Milani include the History of the World relief at the Pennsylvania State Capitol and the four eagle sculptures flanking the entrances of the Knoxville Post Office. Milani's carvings were shipped to customers as far away as Pakistan and Japan.

The Candoro Marble Works complex was initially added to the National Register of Historic Places in 1996 for its role in Knoxville's early 20th century marble industry. In 2005, the complex's showroom and garage were relisted to include architecture in their area of importance. The complex's four water towers are listed as contributing structures, and a now-vacant marble yard behind the showroom is listed as a contributing site.

The Candoro Marble Works showroom is a two-story building with a marble veneer exterior completed in 1923. Architect Charles I. Barber of the firm Barber & McMurry designed the building primarily in the Beaux-Arts style, and Albert Milani executed the marble detailing. The building's facade features a hand-carved cartouche and floral motif and a wrought-iron door crafted by Philadelphia master blacksmith Samuel Yellin (1885–1940). The showroom's interior includes an entrance hall with polished travertine and frescoed plaster walls and a hand-carved marble rosette. Adjacent to the entrance hall is a room with East Tennessee pink marble walls. The building's floor consists of black-and-white marble tile. A second-story penthouse sits atop the showroom building.

All content from Kiddle encyclopedia articles (including the article images and facts) can be freely used under Attribution-ShareAlike license, unless stated otherwise. Cite this article:
Candoro Marble Works Facts for Kids. Kiddle Encyclopedia.