Seven Islands State Birding Park is a state park in Knox County, Tennessee located east of Knoxville near Kodak along the French Broad River. The park was created for birdwatching. The diverse grassland landscapes and the river create a habitat for more than 180 species of birds.

The park was opened on July 1, 2014 by state and local officials.

For much of the 20th century, the park's land was part of a farm operated by the Kelly family, whose name is still attached to the river bend and the park's main access road, and whose farm house is still standing on the property. Preservationists gradually acquired the land and donated it to the Knox County Parks and Recreation Department. The Seven Islands Wildlife Refuge was created and initially managed by the Parks and Recreation Department and the Seven Islands Foundation, and later by the Legacy Parks Foundation. The refuge became Tennessee's 56th state park on July 1, 2014. The park's name refers to a string of small islands and shoals in the adjacent river. 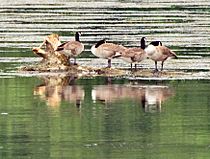 Birdwatching is why the park was created but it also includes the following:

The park is located along the French Broad River.

The park can be accessed from Interstate 40 via exit 402 (Midway Road).

All content from Kiddle encyclopedia articles (including the article images and facts) can be freely used under Attribution-ShareAlike license, unless stated otherwise. Cite this article:
Seven Islands State Birding Park Facts for Kids. Kiddle Encyclopedia.