The song sparrow (Melospiza melodia) is a medium-sized New World sparrow. Among the native sparrows in North America, it is easily one of the most abundant, variable and adaptable species. 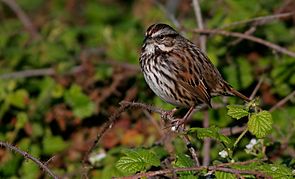 Adult song sparrows have brown upperparts with dark streaks on the back and are white underneath with dark streaking and a dark brown spot in the middle of the breast. They have a brown cap and a long brown rounded tail. Their face is gray with a brown streak through each eye. They are highly variable in size across numerous subspecies (for subspecies details, see below). The body length ranges from 11 to 18 cm (4.3 to 7.1 in) and wingspan can range from 18 to 25.4 cm (7.1 to 10.0 in). Body mass ranges from 11.9 to 53 g (0.42 to 1.87 oz). The average of all races is 32 g (1.1 oz) but the widespread nominate subspecies (M. m. melodia) weighs only about 22 g (0.78 oz) on average. The maximum lifespan in the wild is 11.3 years. The eggs of the song sparrow are brown with greenish-white spots. Females lay three to five eggs per clutch, with an average incubation time of 13–15 days before hatching.

In the field, they are most easily confused with the Lincoln's sparrow and the Savannah sparrow. The former can be recognized by its shorter, grayer tail and the differently-patterned head, the brown cheeks forming a clear-cut angular patch. The Savannah sparrow has a forked tail and yellowish flecks on the face when seen up close.

Though a habitat generalist, the song sparrow favors brushland and marshes, including salt marshes across most of Canada and the United States. They also thrive in human dominated areas such as in suburbs, agricultural fields, and along roadsides. Permanent residents of the southern half of their range, northern populations of the song sparrow migrate to the southern United States or Mexico during winter and intermingle with the native, non-migratory population. The song sparrow is a very rare vagrant to western Europe, with a few recorded in Great Britain and Norway.

These birds forage on the ground, in shrubs or in very shallow water. They mainly eat insects and seeds. Birds in salt marshes may also eat small crustaceans. They nest either in a sheltered location on the ground or in trees or shrubs. Song sparrows with areas of shrub cover in their territory, away from the intertidal coastline, have greater over-winter survival, as well higher reproductive success.

The song sparrow has been the subject of several studies detailing the physiological reactions of bird species to conditions such as daylight length and differing climatic conditions. Most birds gain mass in their reproductive organs in response to some signal, either internal or external as the breeding season approaches. The exact source of this signal varies from species to species - for some, it is an endogenous process separate from environmental cues, while other species require extensive external signals of changing daylight length and temperature before beginning to increase the mass of their reproductive organs. Male specimens of M. melodia gain significant testicular mass in response both to changes in the daily photoperiod and as a result of endogenous chemical signals. Females also undergo significant ovarian growth in response to both photo-period and endogenous signals. Hormone levels in both males and females fluctuate throughout the breeding season, having very high levels in March and late April and then declining until May. These studies suggest that there are multiple factors at work that influence when and how the song sparrow breeds other than just increasing day length.

Due to the myriad subspecies of the song sparrow and the extremely varied climate of southern California, where many of these subspecies make their homes, physiological studies were undertaken to determine how climatic conditions and local environment influenced the bill size of M. melodia subspecies. The bill of a bird is highly important for thermoregulation as the bare surface area makes a perfect place to radiate excess heat or absorb solar energy to maintain homeostasis. Knowing this, comparisons of bill length between individual song sparrows collected in different habitats were made with regard to the primary habitat type or microclimate that they were collected in. Larger beaked subspecies were strongly correlated with hotter microclimates - a correlation that follows from the conditions of Allen's Rule. 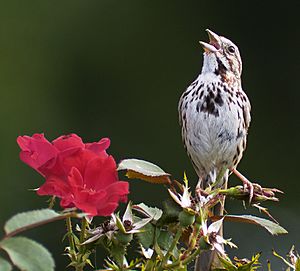 The sparrow species derives its name from its colorful repertoire of songs. Enthusiasts report that one of the songs heard often in suburban locations closely resembles the opening four notes of Ludwig van Beethoven's Symphony No. 5. The male uses a fairly complex song to declare ownership of its territory and attract females.

Singing itself consists of a combination of repeated notes, quickly passing isolated notes, and trills. The songs are very crisp, clear, and precise, making them easily distinguishable by human ears. A particular song is determined not only by pitch and rhythm but also by the timbre of the trills. Although one bird will know many songs—as many as 20 different tunes with as many as 1000 improvised variations on the basic theme,—unlike thrushes, the song sparrow usually repeats the same song many times before switching to a different song.

Song sparrows typically learn their songs from a handful of other birds that have neighboring territories. They are most likely to learn songs that are shared between these neighbors. Ultimately, they will choose a territory close to or replacing the birds that they have learned from. This allows the song sparrows to address their neighbors with songs shared with those neighbors. It has been demonstrated that song sparrows are able to distinguish neighbors from strangers on the basis of song, and also that females are able to distinguish (and prefer) their mate's songs from those of other neighboring birds, and they prefer songs of neighboring birds to those of strangers.

Common predators of the song sparrow include cats, hawks, and owls, however snakes, dogs, and the American kestrel are treated ambiguously, suggesting that they are less of a threat. The song sparrow recognizes enemies by both instinctual and learned patterns (including cultural learning), and adjusts its future behavior based on both its own experiences in encounters, and from watching other birds interact with the enemies. Comparisons of experiments on hand-raised birds to observation of birds in the wild suggest that the fear of owls and hawks is instinctual, but fear of cats is learned.

Song sparrows' nests are parasitized by the brown-headed cowbird. The cowbirds' eggs closely resemble song sparrows' eggs, although the cowbirds' eggs are slightly larger. Song sparrows recognize cowbirds as a threat and attack the cowbirds when they are near the nest. There is some evidence that this behavior is learned rather than instinctual. A more recent study found that the behavior of attacking female cowbirds near nests may actually attract cowbird parasitism because the female cowbirds use such behavior to identify female song sparrows that are more likely to successfully raise a cowbird chick. One study found that while cowbird parasitism did result in more nest failure, overall there were negligible effects on song sparrow populations when cowbirds were introduced to an island. The study pointed to a number of explanatory factors including song sparrows raising multiple broods, and song sparrows' abilities to raise cowbird chicks with their own.

The song sparrow is one of the most polytypic bird species in North America, rivaling other variable species on a global scale, such as the horned lark, the yellow wagtail, the golden whistler, and the island thrush. There have been a total of 52 subspecies named altogether, of which 25 are still recognized following a systematic morphological review. A high quality reference genome has recently been created for this species, which will allow for comprehensive genomic analyses of the differences between the several morphologically diverged subspecies.

Large, dark, diffuse dark streaks. A study of mtDNA allozyme variation of most forms in this group concluded that they are of comparatively recent origin and that island populations are apparently derived independently from each other. 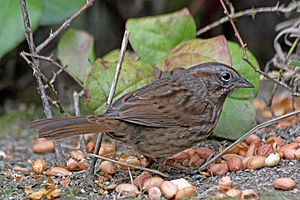 Taken near Anacortes, Washington in March, this individual is most likely M. m. morphna 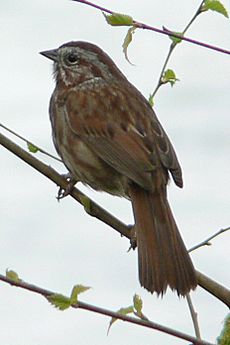 Seen as a whole, the song sparrow is widespread and common enough to be classified as Species of Least Concern by the IUCN. The taxa mailliardi, maxillaris, samuelis (all Category 3), pusillula (Category 2), and graminea (Category 1) are listed as Species of Special Concern in California.

All content from Kiddle encyclopedia articles (including the article images and facts) can be freely used under Attribution-ShareAlike license, unless stated otherwise. Cite this article:
Song sparrow Facts for Kids. Kiddle Encyclopedia.