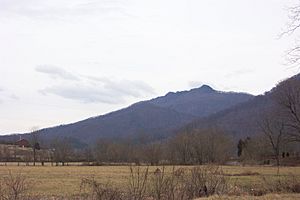 Bays Mountain is a ridge of the Ridge-and-Valley Appalachians, located in eastern Tennessee. It runs southwest to northeast, from just south of Knoxville to Kingsport.

Its southern segment is relatively low in elevation (up to about 1,300 feet (396.2 m)). In some places it essentially merges with the surrounding plains, especially where it is bisected by the French Broad River and the Nolichucky River.

The northern segment of Bays Mountain reaches higher elevations, averaging above 2,000 feet (609.6 m) with peaks reaching up to 3,000 feet (914.4 m). It is not a single ridge, but rather a series of closely related ridges, some of which have names of their own. The highest peak is Chimneytop Mountain (3,117 feet (950.1 m)), a spur ridge south of the main Bays Mountain ridge. 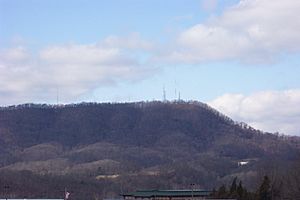 The name of Bays Mountain: Two Bays brothers settled in Southwest Virginia, Russell and Scott Counties about 1780. Bays Mountain received its name from this family as they were noted as great hunters.

All content from Kiddle encyclopedia articles (including the article images and facts) can be freely used under Attribution-ShareAlike license, unless stated otherwise. Cite this article:
Bays Mountain Facts for Kids. Kiddle Encyclopedia.