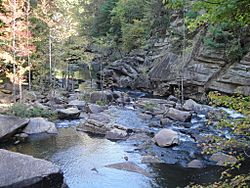 Tallulah River at the bottom of the Tallulah Gorge

The Tallulah River is a 47.7-mile-long (76.8 km) river in Georgia and North Carolina. It begins in Clay County, North Carolina, near Standing Indian Mountain in the Southern Nantahala Wilderness and flows south into Georgia, crossing the state line into Towns County. The river travels through Rabun County and ends in Habersham County. It cuts through the Tallulah Dome rock formation to form the Tallulah Gorge and its several waterfalls (collectively known as Tallulah Falls). The Tallulah River intersects with the Chattooga River to form the Tugaloo River at Lake Tugalo in Habersham County. It joins South Carolina's Seneca River at Lake Hartwell (also created by a dam upriver) to form the Savannah River, which flows southeastward into the Atlantic Ocean.

The lower part of the river includes a string of man-made lakes along the river created by hydroelectric dams operated by Georgia Power. The first (and northernmost) lake in the series is Lake Burton, which is followed by Lake Seed, Lake Rabun, and Lake Tallulah Falls. From Tallulah Falls Lake, the lower part of the river flows through the Tallulah Gorge and now ends as an arm of Lake Tugalo, the other arm of the lake being formed by the Chattooga River. Starting at a point about 0.5 miles (0.80 km) downstream from the dam for Tallulah Falls Lake, the boundary line between Habersham and Rabun counties follows the course of the Tallulah River to its end. 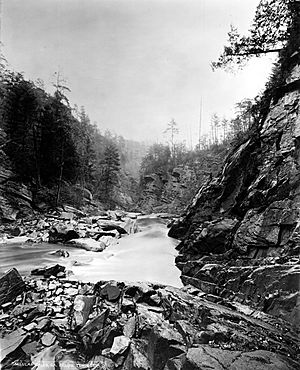 The Tallulah River, circa 1894 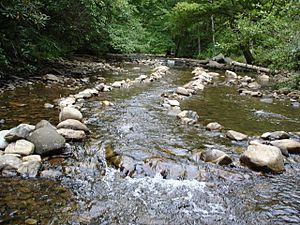 Tate Branch is a branch of the Tallulah River located near Forest Service Road 70 near Clayton, Georgia.

The upper Tallulah River Basin is as scenic as it is rugged. The highest elevations are found in North Carolina on Standing Indian Mountain, elevation 5,499 feet, where the Tallulah River headwaters are located. After coming into Georgia and passing through the old mining and logging town of Tate City, Georgia in eastern Towns County, the river enters into what is known as Tallulah’s upper gorge, or the Rock Mountain Gorge. This upper "gorge" is far less dramatic that the more famous Tallulah Gorge. It starts just upstream from the river’s confluence with Coleman River and runs nearly 3 miles (5 km) past Rock Mountain on the western side of the river. The scenic "gorge" is accessible via a drive along the Tallulah River Road (Forest Service Road 70). The Tallulah River Road follows an old railroad bed before ending in the Southern Nantahala Wilderness and provides the only access to Tate City, North Carolina. Heavily wooded today, the upper Tallulah River Basin was stripped nearly bare by clear-cut logging in the 1930s before the Chattahoochee National Forest was established.

Although Georgians have long assumed that Tallulah was a Cherokee language word, given the prominence of Cherokee history in the state, scholars dispute the derivation of the river's name. This area was long part of the extensive Cherokee homelands in the Southeast. Tourism promoters in the late 19th century said that tallulah meant "thundering waters" in Cherokee. Some scholars later theorized that tallulah meant “terrible” in Cherokee, or was possibly derived from a number of other words. It is more likely that there is no translation for the word. It has no meaning in Cherokee.

But anthropologists now believe that the word was likely derived from the Okonee word talula, which means "town". The Okonee people occupied northeastern Georgia and northwestern South Carolina for hundreds of years prior to the arrival of the Cherokee.

Based on archeological studies, the Cherokee appear to have settled some of their homeland by the mid to late-16th century; for instance, they had built a townhouse by the late sixteenth century at the Coweeta Creek site on the upper Little Tennessee River in present-day North Carolina.

The Overhill Cherokee also used the term, and were known to have a town called Tallulah, located on the portion of the Little Tennessee that flowed on the west side of the Appalachian Mountains. Muscogee Creek also occupied part of this area before being pushed out by the Cherokee.

All content from Kiddle encyclopedia articles (including the article images and facts) can be freely used under Attribution-ShareAlike license, unless stated otherwise. Cite this article:
Tallulah River Facts for Kids. Kiddle Encyclopedia.