Habersham County is a county located in the northeastern part of the U.S. state of Georgia. As of the 2010 census, the population was 43,041. The county seat is Clarkesville. The county was created on December 15, 1817, and named for Colonel Joseph Habersham of the Continental Army in the Revolutionary War.

The highest point in the county is a 4,400-foot (1,300 m) knob less than 700 feet (210 m) southeast of the top of Tray Mountain, the seventh-highest mountain in Georgia. Habersham shares this portion of Tray Mountain, just 30 vertical feet shy of the peak's 4,430-foot summit, with White County to the west and Towns County to the north. 2.4 miles to the northeast of Tray Mountain is Young Lick (elevation 3,809 feet (1,161 m)). The Appalachian Trail runs along the top of the high ridge between Young Lick and Tray, a part of the Blue Ridge Mountain crest.

Out of the hills of Habersham,
Down the valleys of Hall,
I hurry amain to reach the plain,
Run the rapid and leap the fall,
Split at the rock and together again.

The county, originally comprising much of Northeast Georgia, was cut up dramatically in the latter half of the 19th century and the first years of the 20th Century. In 1857, its most western part was added to Lumpkin County, which had been created in 1832. That same year, the area east of Lumpkin and west of present-day Habersham became White County. In 1859, Banks County was carved from Habersham's southern-most territory. Finally, in 1905, Stephens County was formed from parts of Habersham and Banks.

The Georgia Department of Corrections operates the Arrendale State Prison in an unincorporated area in the county, near Alto.

Lee Arrendale State Prison was built in 1926 and the prison was named after Lee Arrendale, former Chairman of the Georgia Board of Corrections after he and his wife were killed in a plane crash. It began its existence as a TB Hospital and operated till the mid-1950s when it was turned over to the Georgia Prison system. Once acquired by the Georgia Department of Corrections, its focus then turned to using the prison to house youthful offenders from ages 18–25. Over a short amount of time, the influx of young, reckless and ruthless inmates lead Lee Arrendale to gain a bad reputation as the second most violent all-men prisons in the state. In 2005, however the Department of Corrections decided to make the prison an exclusive general purpose women's prison. As a result of the prison's past troubles and reputation for violence, the state decided to make this change to improve the prisons status in the state. In March 2006, the prison took in 350 women prisoners from Georgia's overflowing jail system to start this process.

Lee Arrendale is also home to the United States' first all-female fire department in addition to the hundreds of other alarms they received statewide. 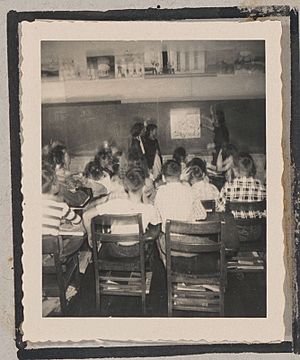 Photograph of a classroom full of students observing a poster on a chalkboard wall, Clarkesville, Habersham County, Georgia, 1950

All content from Kiddle encyclopedia articles (including the article images and facts) can be freely used under Attribution-ShareAlike license, unless stated otherwise. Cite this article:
Habersham County, Georgia Facts for Kids. Kiddle Encyclopedia.