Canton is the second largest town in Haywood County, North Carolina, United States. It is located about 13 miles (21 km) west of Asheville, North Carolina and is part of the Asheville Metropolitan Statistical Area. The town is named after the city of Canton, Ohio. The population was 4,227 people at the 2010 Census. 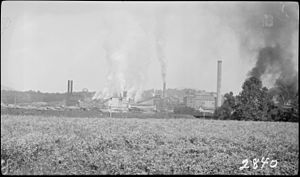 The area was first settled in the late 1780s. By 1790 Jonathan McPeters was farming the banks of the Pigeon River where Canton now stands. Around 1815 the first church was built in what was to become Canton; it was called the Locust Old Field Baptist Church.

Canton was the site of a Champion International Paper factory. Champion contributed largely to the local economy, and was the largest employer in Canton. Upon Champion's decision to close the plant in 1997, the employees of Champion purchased the plant and formed Blue Ridge Paper Company. Under an ESOP, the employees owned a 45% stake in the new company, although it has since been sold. The plant is now owned by Evergreen Packaging.

The Canton Main Street Historic District and Colonial Theater are listed on the National Register of Historic Places.

There were 1,819 households out of which 22.7% had children under the age of 18 living with them, 47.7% were married couples living together, 10.5% had a female householder with no husband present, and 38.5% were non-families. 35.4% of all households were made up of individuals and 20.3% had someone living alone who was 65 years of age or older. The average household size was 2.17 and the average family size was 2.78.

All content from Kiddle encyclopedia articles (including the article images and facts) can be freely used under Attribution-ShareAlike license, unless stated otherwise. Cite this article:
Canton, North Carolina Facts for Kids. Kiddle Encyclopedia.