Burnsville is a town and the county seat of Yancey County, North Carolina, United States. The population was 1,693 at the 2010 census.

According to the United States Census Bureau, the town has a total area of 1.6 square miles (4.1 km2), all of it land.

There were 748 households, out of which 21.9% had children under the age of 18 living with them, 41.2% were married couples living together, 11.6% had a female householder with no husband present, and 44.9% were non-families. 42.1% of all households were made up of individuals, and 25.1% had someone living alone who was 65 years of age or older. The average household size was 2.00 and the average family size was 2.70.

The town was founded on March 6, 1834, from land conveyed by John "Yellow Jacket" Bailey, and named after Captain Otway Burns, a naval hero of the War of 1812. In 1909 a statue of Captain Burns was given to the town by his grandson, Walter Francis Burns, Sr. and was set on a granite pedestal in the center of the town square. It has an inscription which reads, in part, "He Guarded Well Our Seas, Let Our Mountains Honor Him." Due to damages, the original statue was replaced in the early 2000s.

One of the oldest buildings is the Nu-Wray Inn, built in 1833 and listed on the National Register of Historic Places. [1] The Parkway Playhouse, the oldest continually operating summer stock theater company is located in Burnsville, and was started in 1947 by W.R. Taylor (a professor of drama from the Woman's College of North Carolina-now the University of North Carolina-Greensboro) and a group of dedicated community leaders. 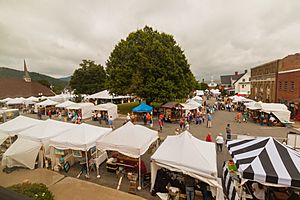 In 2016, the Mt. Mitchell Crafts Fair observed its 59th anniversary. This event, which attracts thousands of unique artists and tourists, is held during the first weekend of August that includes a Friday (August 4 & 5 for 2017, 60th anniversary).

On April 6, 2010, the Town of Burnsville, the only incorporated town within Yancey County, held a referendum providing for the legal sale of alcohol within the town limits. The referendum passed, effectively ending prohibition in Yancey County. After applying for and receiving the applicable permits, Burnsville may now operate an ABC store; retail establishments may now sell beer and wine; and restaurants may sell beer, wine, and mixed drinks. Graham County is the last remaining dry county in the state of North Carolina.

The Nu-Wray Inn, used as a hotel since its construction in 1833.

The Parkway Playhouse, founded in 1947, as a summer stock theatre, is one of the oldest continually operating theatre companies in North Carolina.

John Wesley McElroy House, built circa 1830s and now in use as a museum.

Mt. Mitchell, the tallest mountain east of the Mississippi River.

In 2006 The North Carolina Department of Transportation began widening US 19 and US 19E from a two-lane highway to a four-lane divided highway. The construction began at the junction of Interstate 26 in Madison County and continues where US 19E intersects with Jacks Creek Road. Construction on this section is complete and was dedicated on November 2, 2012. Work on widening the next section has begun, 7.4 miles from Jacks Creek Road to N.C. 80 in Yancey County; this section was scheduled to be completed by July, 2015, but was extended to May, 2016.

Glen Raven is the only operating textile factory in the county. Formerly, Burnsville had two textile mills, with Avondale Mills and Glen Raven, Inc. each operating a mill in the town. The closures of the Avondale Mills facility and Taylor Togs' Micaville blue jeans factory occurred in 2004.

Burnsville is served by the Yancey County Schools System. Mountain Heritage High School, Yancey County's public high school is located outside the town limits to the west on Highway 19E, as is a satellite campus of Mayland Community College. Burnsville Elementary School and East Yancey Middle School lie to the east of the town limits.

All content from Kiddle encyclopedia articles (including the article images and facts) can be freely used under Attribution-ShareAlike license, unless stated otherwise. Cite this article:
Burnsville, North Carolina Facts for Kids. Kiddle Encyclopedia.