Butler is an unincorporated community in Johnson County in the northeastern corner of the U.S. state of Tennessee. It is located along the northern shore of Watauga Lake. Butler is served by a post office, assigned ZIP Code 37640.

The town was originally located on Roan Creek at its confluence with the Watauga River. Settlement began in 1768. For many years the community was called Smith's Mill for the gristmill that Ezekial “Zeke” Smith built on the bank of Roan Creek in 1820. After the Civil War, it was renamed in honor of Colonel Roderick R. Butler of Johnson County, who then represented the area in the state legislature and had been a commander in the 13th Tennessee Cavalry in the Union Army.

Aenon Seminary, a secondary school, was established in Butler in 1871. It later became Holly Spring College, offering education up to a bachelor's degree, and enrolling as many as 200 students. In 1906 it was purchased by the Watauga Baptist Association, which renamed it Watauga Academy. It operated under that name until 1948, when the town was inundated by the formation of Watauga Lake.

Butler was the birthplace of U.S. Congressmen B. Carroll Reece of Tennessee and Robert R. Butler of Oregon (grandson of the town's namesake). 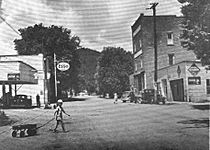 The original town is now known as "Old Butler." Old Butler, called “the town that wouldn’t drown,” is commemorated in a museum in Butler and by "Old Butler Days" which is an annual festival held each year in August right in the heart of the town. In 1983, a drawdown of the lake exposed the remains of Old Butler for a brief time, allowing former residents to visit the site.

All content from Kiddle encyclopedia articles (including the article images and facts) can be freely used under Attribution-ShareAlike license, unless stated otherwise. Cite this article:
Butler, Tennessee Facts for Kids. Kiddle Encyclopedia.