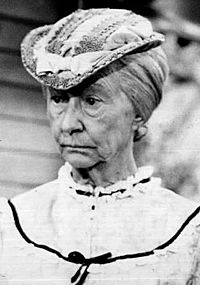 Ryan was known for her role as Granny, the mother-in-law of Buddy Ebsen's character, on the long-running TV series The Beverly Hillbillies (1962–1971). She was nominated for Emmy Awards for Outstanding Lead Actress in a Comedy Series in 1963 and 1964.

Ryan died of glioblastoma and heart disease in Santa Monica, California on April 26, 1973 at the age of 70.

All content from Kiddle encyclopedia articles (including the article images and facts) can be freely used under Attribution-ShareAlike license, unless stated otherwise. Cite this article:
Irene Ryan Facts for Kids. Kiddle Encyclopedia.