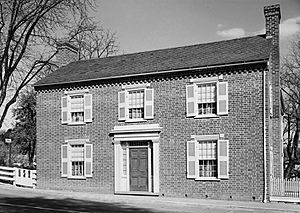 One of Andrew Johnson's homes in Greeneville, Tennessee

The cemetery also includes the interments of Johnson's wife, Eliza McCardle Johnson, and son Colonel Robert Johnson . David T. Patterson, a United States Senator from Tennessee, and his son Andrew J. Patterson, who was instrumental in securing historic designation for the Greeneville properties associated with Andrew Johnson, were among others buried in the cemetery. The site was authorized by Congress as a U.S. National Monument in 1935, established on April 27, 1942, and redesignated a National Historic Site on December 11, 1963.

Today the site totals sixteen acres in area, and has three separate units. These units are the Andrew Johnson Visitor Complex, the Andrew Johnson Homestead, and the Andrew Johnson National Cemetery. Visitors receive a copy of the admission ticket to Johnson's impeachment hearings; every year on May 26, visitors vote on whether or not Johnson should have been removed from office.

Andrew Johnson's first Greeneville home is located across the Street from the visitor complex. 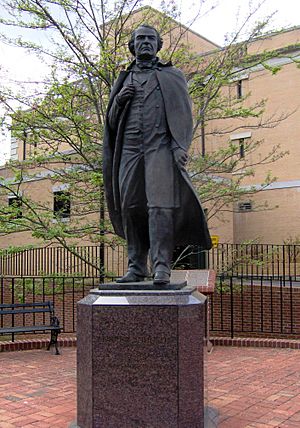 The Andrew Johnson Homestead is maintained to look as it did when Andrew Johnson and his wife lived in the domicile from 1869 to 1875. Johnson had purchased the home in 1851. During the war years, the house was occupied by soldiers. It required renovations when the family returned to the house after Johnson's leaving the presidency in 1869. It is a Greek Revival two-story brick house.

The Andrew Johnson National Cemetery was established in 1906. Andrew Johnson owned twenty-three acres outside Greeneville on Signal Hill. Upon his death in 1875, Johnson was buried on the property. On June 5, 1878, the city erected a 28-foot (8.5 m)-tall marble statue in his honor by Johnson's grave. The monument was considered so dominant that the hill's name was changed to "Monument Hill". Johnson's daughter Martha Johnson Patterson, who inherited the property, willed on September 2, 1898, that the land become a park. She further pushed in 1900 to make the site a national cemetery, so that instead of the Johnson family's maintaining it, the federal government would. The United States Congress chose to make the site a National Cemetery in 1906, and by 1908 the United States War Department took control of it. On May 23, 1942, control of the cemetery was shifted to the National Park Service.

All content from Kiddle encyclopedia articles (including the article images and facts) can be freely used under Attribution-ShareAlike license, unless stated otherwise. Cite this article:
Andrew Johnson National Historic Site Facts for Kids. Kiddle Encyclopedia.