Fall Branch is a census-designated place (CDP) in Washington and Greene counties in the U.S. state of Tennessee. The population was 1,291 at the 2010 census. Some areas in Sullivan also use the Fall Branch ZIP code.

One of the earliest settlers at Fall Branch was Isaac White, a Revolutionary War veteran who arrived in the area in 1781. He eventually established a farm at what is now the intersection of Interstate 81 and State Highway 93. Another early settler, Gabriel Morgan, built a grist mill at Fall Branch in the early 1800s. The mill stood until the 1930s, when it was torn down.

By the early 1800s, Fall Branch was known as "Crouch Town", after a family of early settlers. The name had changed to "James' Cross Roads" by 1830, when a post office was established. The name "Falls Branch" had been adopted by 1854, and the "s" was dropped from "Falls" in 1883, giving the community its current name. The name was inspired by the waterfall the community's main creek, also called Fall Branch, spills over just before it empties into Horse Creek.

In 1836, Fall Branch was designated as the county seat of the proposed "Powell County", which would have consisted of parts of Washington, Greene, Sullivan, and Hawkins counties. While voters approved of the new county, it was rejected by the Tennessee Supreme Court on the grounds that it failed to meet the minimum size required by the state constitution for new counties.

A number of buildings dating to the 19th century still stand in Fall Branch. The Masonic Lodge, home to Johnson Lodge No. 274, was completed in 1869. The Joseph Sheppard House, constructed in the late 1850s, was believed to have been used to hide Confederate soldiers during the Civil War. The Bud White Home was constructed by a local physician, Jonathan Blair White, in 1869. The Hopper House, used as a boarding home for early Fall Branch Seminary students, was constructed in the first half of the 19th century.

View across Fall Branch, with Chimneytop Mountain in the distance on the left

According to the United States Census Bureau, the CDP has a total area of 4.5 square miles (11.7 km2), all of it land. 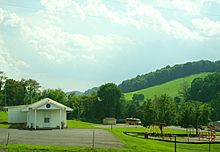 View west from the Fall Branch Post Office; the Ruritan Club is on the left

There were 547 households, out of which 27.4% had children under the age of 18 living with them, 63.1% were married couples living together, 7.3% had a female householder with no husband present, and 26.0% were non-families. 23.6% of all households were made up of individuals, and 9.0% had someone living alone who was 65 years of age or older. The average household size was 2.40 and the average family size was 2.84.

All content from Kiddle encyclopedia articles (including the article images and facts) can be freely used under Attribution-ShareAlike license, unless stated otherwise. Cite this article:
Fall Branch, Tennessee Facts for Kids. Kiddle Encyclopedia.