Camp Creek is an unincorporated community in southern Greene County, Tennessee. Camp Creek is nestled at the foothills of the Appalachian Mountains sub-range the Bald Mountains.

Camp Creek is said to be so named because soldiers camped there during the American Civil War.

Camp Creek, along with neighboring Horse Creek, was hit by two EF3 tornadoes during the nighttime hours of April 27, 2011. A total of eight people were killed altogether by the tornadoes, which either damaged or destroyed hundreds of structures. The first tornado, which more closely affected Camp Creek, was spawned from the same long-tracked supercell that also produced an EF5 tornado near Philadelphia, Mississippi, an EF4 that affected Cordova and Blountsville, Alabama, an EF5 that moved through Rainsville, Alabama, and an EF4 that hit Ringgold, Georgia and Apison, Tennessee. 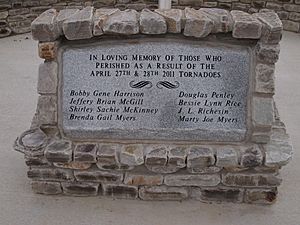 Memorial honoring the victims of the Camp Creek and Horse Creek tornadoes.

A Memorial honoring the victims was dedicated on April 28, 2012, one year after the tornado.

All content from Kiddle encyclopedia articles (including the article images and facts) can be freely used under Attribution-ShareAlike license, unless stated otherwise. Cite this article:
Camp Creek, Tennessee Facts for Kids. Kiddle Encyclopedia.