The Earnest Farms Historic District is a historic district consisting of four historic farms and associated structures near the community of Chuckey in Greene County, Tennessee, United States. The farms include the Elmwood Farm, the Broyles Farm, the Crum Farm, and the Jim Earnest Farm, all of which were initially developed by early pioneer Henry Earnest (1732–1809) and his descendants in the late-18th and 19th centuries. The district includes the Ebenezer Methodist Church, which is home to the oldest Methodist congregation in Tennessee, and the Earnest Fort House, which is one of the oldest houses in the state. Elmwood Farm has been designated a century farm and is one of the oldest farms in Tennessee, having been cultivated continuously since 1777.

Henry Earnest settled along the banks of the Nolichucky River in 1774 and built the Earnest Fort House on a bluff overlooking the river in 1782. Earnest donated the land for the Ebenezer Methodist Church, which was completed in 1795 and ordained that same year by Bishop Francis Asbury. When Earnest died in 1809, his land was divided up among his children, with his son Peter receiving what is now the Elmwood Farm and son Henry Earnest, Jr. receiving what is now the Broyles Farm. Throughout the 19th century, the Earnests operated their farms as small business enterprises, selling much of their produce for profits. In the early 20th century, the Broyles family purchased the Henry Earnest, Jr. Farm and in subsequent years converted it into a dairy farming operation. The historic district contains 43 contributing structures or sites.

Tennessee State Route 351 (known locally as Chuckey Pike) traverses Elmwood Farm north-to-south, connecting the area with the Chuckey community across the river to the north and the Cherokee National Forest to the south. Along the south boundary of the Elmwood Farm, TN-351 gradually ascends to the top of a 100-foot (30 m) hill, from which there is a dramatic view of the Bald Mountains spanning the horizon to the south. Davy Crockett Birthplace State Park, the traditional birthplace of frontiersman Davy Crockett, lies along the east bank of the Nolichucky opposite the Crum Farm. 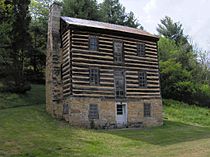 The Earnest Fort House, built in 1782

Henry Earnest was born Heinrich Ernst in Dattlikon, Switzerland in 1732, and immigrated with his parents to Virginia in the 1740s. After serving with the Virginia militia in the French and Indian War, he married Mary Stephens, the daughter of his benefactor, in the 1760s, and migrated southwestward. By 1774, he had arrived in what is now Greene County. The Earnests supported the Patriot cause during the American Revolution, and Earnest's son, Felix, fought at the Battle of Kings Mountain in 1780. The Earnests also played a role in the creation of Greene County in 1783, and Henry Earnest served as the county's first tax assessor. 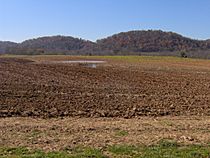 Earnest built the Earnest Fort House in 1782, and developed the adjacent land into a profitable farm. He began work on the Henry and Peter Earnest House (across the river from the fort house) around 1800. Upon his death in 1809, his farm was divided up among his children, with his son Peter (1777–1862) inheriting what is now Elmwood, his son Henry, Jr. (1772–1851) inheriting what is now the Broyles Farm, and his son Felix (1762–1842) inheriting what is now the Jim Earnest Farm. Peter renovated and expanded the house his father had built, and Henry Earnest, Jr. built a similarly-designed house (now the Earnest-Broyles House) during the same period.

Peter, Henry, Jr., and their brother Jacob were all listed as merchants throughout the first half of the 19th century, and their names consistently appear in the ledgers of a general store in Leesburg, (near Jonesborough). Felix Earnest was a minister and leader in the Methodist Church, having been ordained a deacon by Bishop Francis Asbury in 1806 and elevated to Elder by Joshua Soule in 1825. Henry Earnest, Jr. represented Greene County in the state senate 1811–1813, and became a charter board member of Tusculum College upon its founding in 1818. When the East Tennessee and Georgia Railroad completed tracks through Chuckey in the 1850s, Peter Earnest established a toll bridge to connect the Earnest farms to the railroad.

While the Earnests were slave owners, two members of the Earnest family, listed as "B Earnest" and "N Earnest," were part of the Greene County delegation to the East Tennessee Convention at Greeneville on the eve of the Civil War in June 1861. The Earnest farms survived the war mostly intact, although the local economy was in ruins. The toll bridge was replaced in 1869, and again in 1903. In the 1940s, the Broyles family (who had purchased the Henry Earnest, Jr. properties) established a large dairy complex on the Broyles farm, mainly to take advantage of a Pet Milk condensing plant that had been established in Greeneville, although the dairy operation ultimately failed. Today, tobacco is the chief crop of the Elmwood, Broyles, and Crum farms. 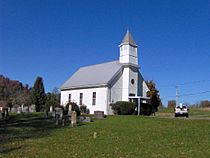 Sometime in the early 1790s, the Earnests and several other area families formed a Methodist society. Methodist circuit rider Francis Asbury delivered a sermon before 200 people at "Squire Earnest's" in 1793, and mentioned that a society of 31 members had been formed. The Earnests eventually donated a parcel of land (between the river and the Jim Earnest Farm) for the construction of a meeting house. On April 27, 1795, Asbury dedicated the new meeting house, marking the beginning of the Ebenezer Methodist Church. The current Ebenezer Methodist Church building, built on the site of the 1795 meeting house, was completed in 1899.

The church is a one-story framed structure, with a metal gabled roof. The exterior walls were originally weatherboarded, but this has been replaced with vinyl siding. The building has a gabled, metal roof and a concrete block foundation. The church's louvered bell tower is two stories, and contains a bell purchased from the Cincinnati Bell Foundry. The interior includes the original wooden siding, hand-painted doors and pews, and a stained glass window. The church's cemetery, which also listed as a contributing property in the historic district, contains the burials of several Earnests and other families associated with church, and at least two slave burials (known only as "Zona" and "Corby").

The Henry and Peter Earnest House, initially built in 1800 and expanded in 1820

What is now the Elmwood Farm was part of the land inherited by Peter Earnest from his father, Henry, in 1809. Upon Peter Earnest's death in 1862, the farm passed to his son, Benjamin, and upon Benjamin's death in 1887, it passed to Benjamin's son Nicholas Earnest. Nicholas Earnest managed Elmwood until his death in 1956, when it was divided among his six children. His daughter, Katherine Earnest Clemmer, then purchased her siblings' share of the farm. Elmwood is the only farm in the district that remains in the hands of Earnest descendants, and in 2002 was designated a Tennessee Century Farm. It is the second-oldest farm in the state, behind only the Masengill Farm in Sullivan County. The farm's eleven contributing structures include:

The Broyles Farm was originally part of the land inherited by Henry Earnest, Jr. from his father in 1809. The Broyles family purchased the farm in 1903. The farm's eighteen contributing structures include: 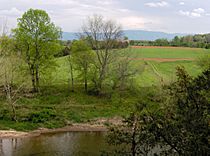 Crum Farm, viewed from a bluff along the Nolichucky River

The Crum Farm is a tobacco farm developed in the 1920s. The Crum Farm's eight contributing structures include:

The Jim Earnest Farmstead is part of the land inherited by Felix Earnest from his father, Henry Earnest, in 1809. After Felix Earnest's death in 1841, the farm passed to his two sons, James Oliphant Earnest and William McKendrie Earnest. The latter's son, Jim Harvey Earnest, inherited the farm in 1902, and managed it until the 1930s. The farmstead has four contributing structures:

All content from Kiddle encyclopedia articles (including the article images and facts) can be freely used under Attribution-ShareAlike license, unless stated otherwise. Cite this article:
Earnest Farms Historic District Facts for Kids. Kiddle Encyclopedia.