Pitt County is a county located in the U.S. state of North Carolina. As of the 2020 Census, the population was 170,243, making it the fourteenth-most populous county in North Carolina. Its county seat is Greenville.

Pitt County comprises the Greenville, NC Metropolitan Statistical Area. As one of the fastest-growing centers in the state, the county has seen a population boom since 1990.

The county was formed in 1760 from Beaufort County, though the legislative act that created it did not become effective until January 1, 1761. It was named for William Pitt the Elder, who was then Secretary of State for the Southern Department and Leader of the House of Commons. William Pitt was an English statesman and orator, born in London, England. He studied at Oxford University and in 1731 joined the army. Pitt led the young "Patriot" Whigs and in 1756 became secretary of state, where he was a pro-freedom speaker in British Colonial government. 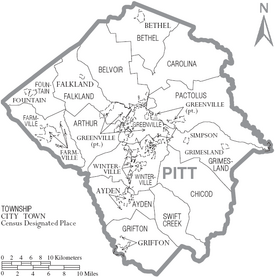 Private schools in Pitt County include:

All content from Kiddle encyclopedia articles (including the article images and facts) can be freely used under Attribution-ShareAlike license, unless stated otherwise. Cite this article:
Pitt County, North Carolina Facts for Kids. Kiddle Encyclopedia.