Martin County is a county located in the U.S. state of North Carolina. As of the 2020 census, the population was 22,031. Its county seat is Williamston.

The county was formed in 1774 from the southeastern part of Halifax County and the western part of Tyrrell County. It was named for Josiah Martin, the last royal governor of North Carolina (1771–75). Whereas Dobbs County and Tryon County, named for Martin's predecessors Arthur Dobbs and William Tryon, were abolished after American independence, Martin County was neither abolished nor renamed, a fact which has been attributed to the popularity of Alexander Martin, twice governor of the state (1782–84, 1789–92).

The Martin County Courthouse was listed on the National Register of Historic Places in 1979. 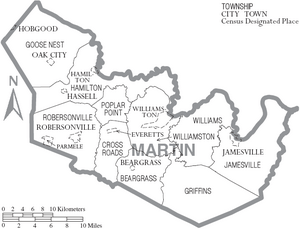 The primary and secondary public school functions are performed by Martin County Schools, a district covering the entire county. Martin Community College is located in Williamston.

All content from Kiddle encyclopedia articles (including the article images and facts) can be freely used under Attribution-ShareAlike license, unless stated otherwise. Cite this article:
Martin County, North Carolina Facts for Kids. Kiddle Encyclopedia.