Halifax County is a county located in the U.S. state of North Carolina. As of the 2020 census, the population was 48,622. Its county seat is Halifax.

The county was formed in 1758 from Edgecombe County. It was named for George Montague-Dunk, 2nd Earl of Halifax, President of the Board of Trade from 1748 to 1761 (Halifax, Nova Scotia was also named after him).

In 1774 the southeastern part of Halifax County was combined with part of Tyrrell County to form Martin County.

Halifax County historically holds the number 1 or 2 spot in North Carolina for the number of harvested white-tailed deer (NC Wildlife Commission). In the 2009-2010 Deer hunting season, 5,443 whitetails were harvested. It is 250 more than 2nd place, Northampton County.

Halifax County Schools are the lowest performing schools in the state of North Carolina. 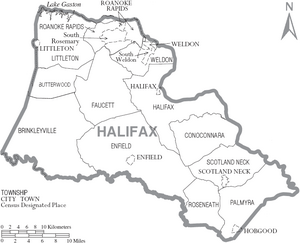 All content from Kiddle encyclopedia articles (including the article images and facts) can be freely used under Attribution-ShareAlike license, unless stated otherwise. Cite this article:
Halifax County, North Carolina Facts for Kids. Kiddle Encyclopedia.